He Is Worthy (Warriors of Rome #2), Lisa Henry 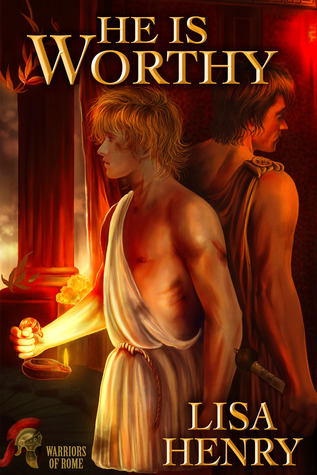 Please note this review contains spoilers. This was not my cup of tea, however it may be yours.

I had a real relationship tussle with He Is Worthy. The idea behind the title is clever but I don’t feel any of the primary characters are particularly worthy. Both Senna and Aenor did not get past two dimensional until right near the end, and I do mean the very end, and that’s too late for me. Perhaps that was more pity for Aenor than anything else. I never liked Senna. It was well edited, well researched, and technically pretty sound; but the emotions and passion I crave so much in a book were left off the page here.

It’s 68AD or CE, depending on how you like to date stamp it. This is the last year Nero is Emperor of Rome, his demise is imminent. He is on the ‘nose’ and we know, due to history, that he will be expected to ‘fall on his own sword’ fairly soon.  All right, setting known.

Novius Senna is a patrician, a Roman born of the upper class, and he is one of Nero’s most trusted, as much as Nero trusts anyone. He has the onerous task of delivering the nine word message that spells your demise in Rome – You no longer have the friendship of the emperor. Senna delivers these words to a great deal of people, including those he knew in childhood, those who were friends, those whose houses he played in, those who knew his family. The book opens with Senna getting drunk after delivering those nine words to someone who was a hero of the Roman Empire, and the public – Gnaeus Domitius Corbulo, in 67AD/CE, in Cenchreae. Why did Corbulo have those words delivered? Because he was popular, and Nero did not like that at all. The nine words delivered to Corbulo, by Senna has been a catalyst, of sorts, for him to reassess his allegiance, and what it is he’s doing with his life; with Nero. After visiting Corbulo at Corinth, Senna is getting drunk at a local hotel –

“You didn’t kill Corbulo, ” the Roman said suddenly. His mouth quirked up in a bitter smile. “I did.”

“I did,” the Roman said “with nine little words.”

“And do you know what he said before he fell on his sword?”

His hands trembled as he poured the Roman another cup. “Axios,” he murmured.

“Well, maybe Nero’s not fucking worthy. Did anyone ever think of that!”

Fast forward, past the original scene, and Senna hasn’t recovered after Cenchreae. He doesn’t like much about the inner sanctum anymore, particularly Tigellinus, who has the sadistic ear of Nero. He has recently made sure his sister, Junia, and his brother-in-law, Titus, are out of Rome. He sees the writing on the wall for Nero, he hopes to be a part of the ‘writing on the wall’ for Nero; and doesn’t want the fallout to hit them. After all, his sister has has to survive the nine words being delivered to her original love, Lucan, who was tortured and murdered at Nero’s behest. As a character I didn’t like Senna. His words and his actions did not line up. I understand the whole situation, he fell in with Nero when Nero was younger, more inclined towards the people of Rome – less harsh on slaves, favouring the arts and artists, cutting taxes. However, he grew more power hungry, listened to those that suited his need to maintain power – let’s face it, you use yourself and your behaviour as a yardstick when judging others. Poisoning/killing close relatives, castrating lovers, and killing partners is a pretty toxic yardstick to use to judge others by, guaranteed to set your own paranoia pretty high. Unfortunately people like Senna stay and find themselves increasingly drawn into the dirty work. I’m not fond of people using ‘I was stuck’, ‘I was only following orders,’ ‘I had no choice.’ when doing despicable things. Senna doesn’t use those words. Doesn’t have to, he’s there doing what he does best for Nero. Senna supposedly has a moral compass, we’re in his head as he berates himself on occasion, but he justifies what he does. Always has. I don’t care what his future plan is. Lisa Henry tries to tell us, the readers, that he is worthy. And yet, I’m not convinced of his moral compass. I think he’s a prick, by and large. There was not enough shown to me that he cared for friends, let alone his slaves, to circumvent this readers ill will towards him. The fact that his slaves fought for him in the end defied logic for me because, really, what did he do that was so bloody decent?

Aenor is a Bructeri trader who happened to be in the wrong place at the wrong time. He is accused of killing Romans. His cousins were killed, he’s been found guilty, and has been sold from owner to owner. When he is on page it’s always pretty awful for him. He is raped, brutalised, tortured. His allocated Roman name, which is what happened to you when you became a Roman slave, was Canis – or Dog. His latest Dominus is Tigellinus – lucky Aenor. He is sodomised both by Tigellinus and Nero. He lives on scraps and dreams of going home. When he is brutalised he goes to another place, one that has significance for him. One where he trod on Romans remains and spat on their empire, the Teutoberg Forest. One might think ‘surely he is worthy of freedom and a better life.’ Yes. Yes, he is, but I knew so little of Aenor for me to really care. I didn’t want to see a character treated like he had been, then led away to be tortured because another slave, one seeking Nero’s favour and bed, overhears a plot. One that Senna was really lax about discussing. Yet I found it nigh on impossible to connect to Aenor. I actually kept forgetting his name.

One day, while Aenor is being sodomised by Tigellinus, during a conversation between Tigellinus and Senna, Senna sees a spark of ‘strength’ in Aenor’s green eyes. Really? A spark? Okay. I’d think it was probably shame, pain and fear, myself. Senna also finds himself getting erect and disgusted with what’s happening all at the same time. Disgusted I can work with. Erect? I can’t. Senna decides he has found his ‘device’ to take out Nero  He will use a play, Nero loved to put on theatre productions featuring his gruesome self, and one of the props in the play will house a knife so Aenor can stab Nero; in the groin or the stomach. First of all he consults a very bruised and battered Aenor to confirm that he hates Romans. Why, yes. Yes, he does. Funny that. So the plan will now go ahead. Lucky Aenor. But not before Senna has his way with Aenor first. I must say I didn’t like it. Aenor has had his arse bruised and battered, first by Tigellinus and a massive phallus, and then Nero. Call me old fashioned, or hypocritical, I read these books I suppose, but no matter how much there was ‘care’ shown by Senna it didn’t work for me. Not. Sexy. At. All.

So I have a conundrum. He Is Worthy, I feel, is pretty historically accurate. If you know and like history, particularly this time period, it is interesting. Many names are used and they are used correctly – yes, Corbulo really was a catalyst for people’s increased disdain of Nero. Nero was the murderer, so to speak, of a popular man, one who was considered a hero in the eyes of the Roman public, and beyond. He was not an enemy of Rome, nor was he traitorous, perhaps by association of family members but he himself, no. Tigellinus is real, he was a licentious, sadistic bastard who goaded Nero on, and was a Prefect of the Praetorian Guard. He also saw the writing on the wall and shafted Nero when the time came. Pretty typical (Roman) stuff. BUT, I feel that two things happened with He Is Worthy 1) It threw out a lot of historical facts and names, but it’s a short book, and they couldn’t be followed through on, they bogged it down, and this is not a non-fiction read, it’s a M/M, historical, romantic/erotic read. I could have read something else in an historical genre if I required more developed history, and 2) the two MC’s, I’m not sure that’s the way to describe Aenor and Senna – MC’s, got lost in amongst everything else, and I flat-out did not like Senna. The intimate encounters were always at the most inopportune/unsavoury times, for Aenor anyway. They just didn’t sit right with me. Others can make up their own minds. He Is Worthy felt like it was trying to ride two horses, one historical, and one romantic/erotic. It was not a seamless combination here. It fell off both horses I’m afraid.

The book had a happy(?) ending, of sorts. I suppose you could call it that. I can’t feel this way myself, in all honesty, because Aenor is always going to be an emotional mess after his time at the hands of the Romans. Aenor gets to feel the Teutoberg Forest again, but it’s not the same. That’s pretty spot on, how could anything be the same again for him? He gets to be with Senna, who he had developed feelings for, god knows why. Really, what feelings can be based on something so horrible that one man clings to a Roman as his partner? I don’t think it can last, maybe I’m a cynic. Maybe I’m overanalysing the whole shebang. Maybe I know human nature and the end results of abuse. Was the writing good? Yes, technically, and facts were well researched, and it was well edited, but it wasn’t enough. It lacked depth, passion and emotional cohesion. It also had some stylistic problems, the characters were not fully developed, and there was a disconnect for me that did not help my enjoyment. If you like slaves, Nero’s reign, a bit of slave-sex, and base humiliation, it may work for you. That is not a judgement, to each their own. It just didn’t work for me.