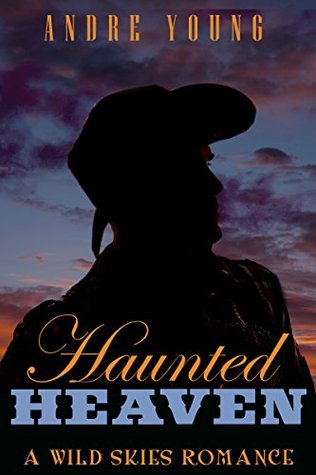 Honor Fontanne has just lost the only man he’s ever loved, and it’s all because of his own stubbornness. All Jett wanted was to be together and show the world their love, but Honor isn’t sure he’s ready for that step. To give himself time to think, he heads for the mountains above Heaven, Montana to the family’s ancestral homestead.

But when the cabin spins him back through history to teach him a few lessons about love and loss, Honor knows he can only do one thing – find Jett and beg for another chance.

A heartfelt ghost story about the mistakes we make, the redemption we seek, and lessons we learn when history repeats itself.

I’m going to say right off that if you read this story you have to suspend any and all belief and I’m not just referring to the paranormal aspects of the story. None of the characters are that believable when it comes to pretty much everything, but it’s fiction and that was fine (for the most part) with this story. 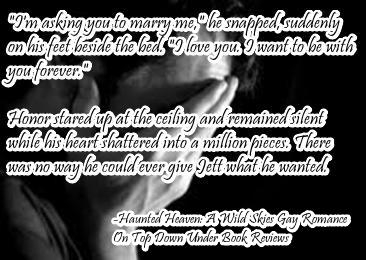 Honor and Jett have been a couple for two years, though I use the word ‘couple’ lightly in Honor’s case. They love each other dearly. Their sex life is off the charts. The problem? Honor is deep in the closet and has no plans to ever come out of it. Not Jett. Jett is out and has been for a long time. Honor is afraid that coming out would force him to lose his family and his job at a local ranch. No, not afraid, terrified. The reader is introduced to Honor’s family and will likely think “These folks? They’re amazing. They won’t turn their backs on you. Tell them already!” Honor, though, is determined to live out his entire life as a lie.

It’s two days after Christmas when the story starts. Honor and Jett are at Jett’s place and have just spent the night together – something that rarely happens because Honor usually does his thing and disappears. Can’t chance anyone knowing he was with a man, can he? When they wake up that morning, they have sex and all seems to be okay. That changes when Jett once again asks Honor to marry him. Nope, not gonna happen because that would mean telling everyone that he (Honor) is gay. Jett has had enough. For two years he’s loved the other man and has been his dirty little secret. He’s tired of hiding the relationship and he knows that nothing will make Honor come out of the closet. He tells Honor it’s over. As in, “Here are your clothes. Put them on and get the hell out. I don’t want to talk to or see you again.”  You can’t blame the guy, really. Honor refuses to even ‘meet the family’ and their time together consists of getting quickies here and there and then Honor sneaking out like a thief in the night. Anyone reading this would have to sympathize with Jett. Some might even say “good riddance” to Honor. I admit that I did. Had he been nicer about things, I might’ve felt differently. He was quite rude to Jett and pretty much expected the other man to accept things and keep going in the relationship as they had been… forever. 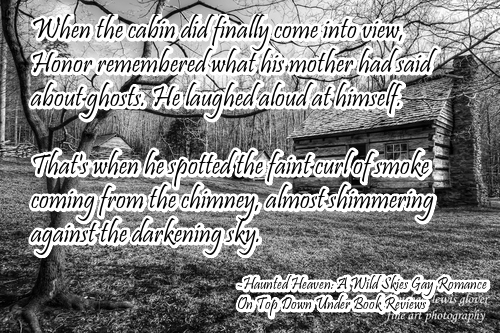 Honor takes off for a visit with his parents. During the visit, it’s suggested by them (they can tell their son is depressed over something) that he go out to the old family homestead and spend a few days. No one has been out there in over twenty years, so it might not even be standing, but go anyway. Honor does. There he finds the old house a couple of his ancestors lived in. Shocked it’s still standing, he puts his stuff in the house and goes out to collect firewood. Strangely, when he comes back inside there’s already a fire in the fireplace that he didn’t start and there’s furniture where before there was nothing.

Then he starts seeing things, or should I say seeing people. The story of those who lived there over a hundred years ago was told to him by his parents before he left their place. It’s the story of a young couple who loved and lost. A sad story, really, made even sadder by events that unfold for them later. The reader knows immediately that the folks Honor is seeing are the same people from so long ago and he’s being privy to the events of their lives long after they’ve lived and died.

I won’t go into all the details in regards to the ghosts. Doing so would give almost the entire story away. I will say this…. I really enjoyed that part of the story. Actually, I enjoyed it much more than Honor and Jett’s story. Sure, the entire point of what Honor saw at the old homestead was him learning a lesson about keeping things to himself… about hiding who he is…. but I had a difficult time feeling a whole lot of love for the guy. Jett seemed like a really good – and patient – person, but Honor didn’t treat him fairly. All of this changed drastically when he went and spent three days at the home of his ancestors. 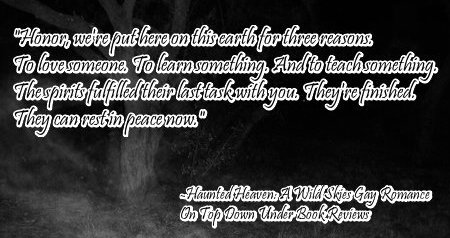 Overall, a really good story, but it’s in  need of a bit of editing. I know I sound like a broken record in regards to that, but sometimes the mistakes are so glaring that you wonder how they weren’t noticed before publication. I’m not saying the issues were on every page because they weren’t. They were, however, there enough to be a tad distracting. I mentioned suspending belief and not just in regards to the paranormal aspects. What I meant by that was that everyone seemed a bit too eager to believe things that would have most folks shaking their heads. I get the thing with Honor, but not necessarily the others. I wasn’t a fan of Honor, but I did like Jett and was cheering him when he finally had enough and dumped the man he’s loved for two years. I know that sounds harsh, but sometimes it takes something like that for someone to open their eyes and see they are throwing away the best thing that ever happened to them. That was definitely the case here.

An enjoyable read and a freebie on Amazon at the time of my typing this. If you’re looking for a quick read with a bit of romance and ghosts, I think you’ll enjoy Haunted Heaven. I enjoyed it enough to want to check out others in the Wild Skies world. I’m all about ghosts and romance. When I have both in one book, I’m a happy reader.

Previous post
The One Who Saves Me by Cardeno C
Next post
My Brother’s Lover (Twin Ties #1), Lynn Kelling

Nice review Cindi, it drives me crazy when MC’s can’t see how their behaviour affects their mate. Usually that need to resolve drives me to read to completion. I’m gonna check it out. J

Thanks, Judy. Honor learned his lesson in a very unique way. It’s a nice story. I’ll be checking out more of the Wild Skies world.

I liked the sound of Jett, I wanted to slap Honor just from the review. And ghosts…I know you love them in stories, so I’m glad their story was a good one and one to learn a lesson from.
Nice review and pics/quotes, Cindi 🙂

I really liked Jett a lot and was pleased when he told Honor he’d no longer be his dirty little secret. Honor somewhat redeemed himself later. I do love ghosts, so this was totally a Cindi book. 🙂