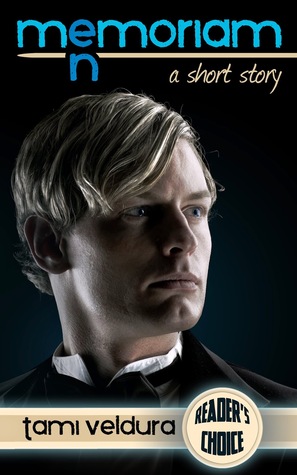 Paul has seen Victor before, he just can’t remember where. The rush of fear in his stomach when Victor glances his way is familiar. Paul knows the slant of his smile. There’s nothing safe here, but when Victor offers to meet over coffee, Paul is swayed by this sense of knowing. Victor’s touch feels like an old lover. His hands have been here before.Paul is sure he once learned something Victor is trying to hide. His hair stands on end whenever Victor gives him attention, like his body reacting to danger that his mind can’t recall. He’s not sure uncovering more is a good idea but he craves what Victor might give him. Paul wants to know why he longs for Victor’s voice. He dreams about conversations they’ve never had. He desires a darkness he’s never seen before. They met only once, but this longing is too intense. Victor is keeping secrets, Paul just can’t remember them.Expanded from Mile High Vampire, a reader favorite flash story previously published in the collection Fanged. En Memoriam stands alone.

Paul is convinced he has met Victor before. Every time he sees him, there is a major sense of deja vu that bothers him. On top of the feeling of knowing he has met Victor before is the strong feeling that they’ve done more than just pass each other on the street or shared the same plane during Paul’s frequent business trips. He is convinced that he knows Victor in an intimate way, but why can’t he remember? And why does the longing he feels for the stranger also come with a strong fear that he can’t shake?

Paul has met Victor on many occasions, only he’s not supposed to remember. Victor is a vampire and after each encounter with Paul, he wipes his memory of what has occurred. Vampires aren’t supposed to use the same human as a blood source again and again, but something has Victor going back to Paul. There is something about Paul that has him breaking all the rules. 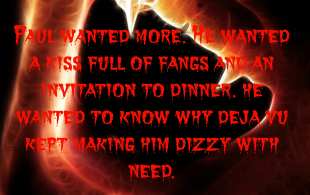 This is a really good story, though I did have a couple of niggles with it. As another reviewer stated, there’s a bit of repetitiveness throughout. The story is quite short, at around 44 Kindle pages, but I found myself reading … while I can’t say the exact scene over and over, different scenes that were so similar to the ones before them that I was wanting to see something a bit … more, I guess I can say. More different. And strangely, as short as the story is, I found myself a little confused in a few places. Other readers might not, so that may not even be an issue for some.

The sex is a bit rough in places, but I found it to be hot as hell. I love darker books so it was perfect for me.

The relationship between Paul and Victor is unique, though I would have liked to have seen few pages added at the end to see where the story went from there. The ending will either be loved or hated by some. I got it completely as it made complete sense to the story, though I would have been okay as well had it gone in another direction entirely.

Overall, a nice, quick read. You get sucked into the story immediately and will turn the pages quickly to see what will be happening next. I’m always a fan of darker characters so I adored Victor from the very first page. Highly recommended if you like dark and sexy, along with a nice story.

This sounds like a book I would enjoy. I love vampires and I love dark and non-cookie-cutter endings. That cover is really interesting as well.

Thanks, Kazza. I know you would enjoy this story. It’s short, but a lot is said in those few pages.