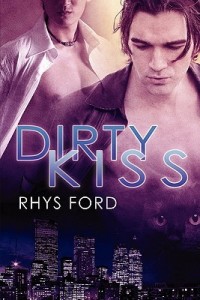 Possible suicide, murder, the past murder of a lover, a hilarious best friend, culture clashes, a Filipino transvestite, a possibly demonic cat, and various other things make for one hell of a start to a series.

I have quickly developed a love for Rhys Ford’s work.  Last week I read Sinner’s Gin and loved it. Today I finished Dirty Kiss, the first in the Cole McGinnis series and I devoured every word. There is something about this author’s writing style that will suck you in and make you frustrated if you have to put down your Kindle even for a little while.  As much as I loved Sinner’s Gin, Dirty Kiss is the book that pushed this author up there as a new favorite for me.  I don’t normally like series that focus on the same couple throughout.  I knew going into both series that that would be the case.  With each book I ended it wanting more.  Needing more.  So much is left undone in Dirty Kiss that I am eager to finish this review and jump into Dirty Secret, the second in the series.

Cole McGinnis is an ex cop turned private investigator.  He is still mourning the senseless murder of his long-term lover, Rick.  He has not been with another man since the day he watched his lover die and his world fell completely apart.  A routine case turns his life upside down in more ways than one could imagine.  He has been hired to investigate the supposed-suicide of a prominent Korean businessman’s son.  The suicide allegedly took place in the upstairs rooms of a gay sex club where wealthy men can privately indulge in their secret desires.  The suicide brought dishonor to a very strict and traditional Korean family.  The location where his body was found is an even bigger slap in the face of the family’s traditions.  While investigating the man’s death, Cole meets Kim Jae-Min, the dead man’s cousin.  The dead man’s gay cousin.  For the first time since the murder of Rick, Cole is attracted to another man but yet acting on that attraction could be dangerous.  Jae has secrets that he keeps from Cole.  Is one of those secrets the fact that Jae murdered his own cousin?  Then there is the fact that Cole is living with the guilt of Rick’s death years earlier… Cole wasn’t able to protect his lover and he brought the murderer to his door. When Jae is threatened and later hurt, Cole must work diligently to find out who is out to get this young man before he loses someone else in the same way he lost Rick.

Jae is a mystery from the very beginning.  There are a lot of things from his past that could help the case for Cole but Jae stays closed-lipped. He volunteers very little and is thrust into dangerous situations as a result.  He too comes from a traditional Korean family where being outwardly gay is not an option.  He supports his family and someday he will be forced to marry a ‘proper’ female who will give his mother grandchildren.  Falling in love with a man would be disastrous. He would lose the honor of his family and be cast out.  His family must always come first.  He cannot allow himself to fall in love with Cole.

As Cole gets closer to the truth about the supposed suicide, the body count starts to rise.  He is almost killed many times, as is Jae.  They must find a way to work together to find out what is going on or one or both will be killed as brutally as the others.

This book has an interesting cast of secondary characters.  There is Claudia, Cole’s eccentric business manager, his brother who supports Cole and his lifestyle as long as details are not forthcoming, a Filipino transvestite who is close to Cole and Jae (but for different reasons), Bobby, Cole’s best friend in the world who is also gay and a former cop.  Then there are the murder suspects, most of which are all part of the Kim family.

This book is heavy in Korean dialogue and tradition.  The way the author wrote this was quite interesting.  I admit to being confused a few times by the dialogue but not the traditions behind the culture.  Watching Jae try to deny what he could have with Cole because of his family broke my heart a few times.  While the two men do get together, the reader knows that both men will have to overcome a lot before they can have their true happily-ever-after.

The sex is hot in this book.  Cole must find away to get beyond the guilt of losing Rick before he is able to fully participate and enjoy Jae. There are a few sad moments as a result but ultimately the reader knows that it will all work out in the end.  I’m eager to see how exactly that will happen.

The murder mystery kept me guessing until about midway through the book and even then, I was questioning whether it could really be that person or someone else entirely.  Every time I thought I had a handle on who that person might be, the author threw the reader for a loop and sent it in an entirely different direction.  This is one of the main reasons that I enjoyed the book so much.  It was not predictable in any way when it came to the murderer.  I ended up being right in the end (in regards to who the murderer is) and I was even correct in the reasoning for it.  In no way did this take away from the story as I never was 100% sure until that person was revealed.

So much is left unfinished at the end of this book and that’s okay. Normally that would not be the case for me but I totally understand it in this case.  This book was to give the back story and histories of the characters involved, on top of the mystery aspect.  I cannot wait to find out how Cole and Jae will work through the familial issues.  I also hope to see some answers at some point in regards to Rick.  That was left out there.

Overall, an outstanding book.  As mentioned above, I love Rhys Ford’s writing style.  In the two books I’ve read, each has been full of details with things happening at random.  At no time did I feel that any details were unnecessary.  The characters are all written perfectly and each secondary character is integral to the story.    The ending of Dirty Kiss was an “Aww…” moment. I admit to having to go to Google Translate to figure it out but I did figure it out in the end.  Beautiful.

I can’t wait to read any and all books this author puts out in the future.  Now I’m off to read Dirty Secret. 🙂