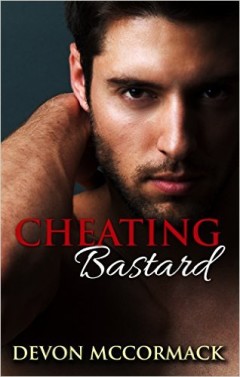 He can get away with anything…

I’m not really sure where to begin with this review. The story is short so saying too much will give it away. I will start by saying that I’ve read everything Devon McCormack has written to date and I’ve loved them all. However, Cheating Bastard quickly jumped to the top as my favorite of his. I’m not a big fan of cheating in books unless the books are pure erotica. If there’s a real romance, I usually shy away. Cheating Bastard would never be considered a romance, so it was perfect.

Don’t go into this expecting anything more than it is. The title is Cheating Bastard for a reason. The entire story is centered around a cheating main character.

Blake (said cheating bastard) has been with Todd for a few years. When Blake found out he had cancer, Todd stayed by his side and supported him through it all. I adored Todd from the first page. In the months since the treatment ended, Blake has made one excuse after another on why he won’t have sex with Todd. Todd has tried everything, but Blake says he’s not ready.

Blake’s ‘not ready’ because he’s getting it from every man he can – outside of Todd, that is. He’s not just getting it from others, he’s taking chances that most cheating bastards wouldn’t take. He brings his tricks home to the bed he shares with Todd and will have sex with them until literally minutes before Todd is due to arrive home. It’s a big thrill. But Todd isn’t allowed to step outside of the relationship. The thought of that makes Blake furious, to put it mildly. Blake is convinced that won’t happen anyway, so he doesn’t give much thought to it. He doesn’t have a good opinion of Todd, though he claims to love him.

The ‘date’ is set up and Kyle is brought into Blake and Todd’s bed.

I can’t say more than that or I’ll give too much away. Suffice it to say that things don’t go exactly as planned for any of the parties involved.

Cheating Bastard is told in alternating points of view, which I really loved. The reader is taken inside the heads of Blake, Todd and even Kyle. You’re able to get invested in each character before the finale. You know their thoughts and plans long before everything comes to a head, so to speak.

The sex is hot (don’t expect a lot of lube and prep… just sayin’). The reader is able to see Blake’s conquests and is also taken inside the bedroom when Kyle comes to play.

Great story. I’ve always been a big fan of this author, but this story definitely sealed it. Not many can cover a story like this in so few pages and get it right. It was definitely done right in Cheating Bastard, in my opinion. You will hate Blake with every fiber of your being and you’ll adore Todd and Kyle. Like I’ve said in other reviews of Devon McCormack’s work, you might think you’ll know what’s going to happen, but I can assure you that you’ll be wrong.

I loved the ending. Others might not, but I thought it was perfect.

For a bit of extra extra zing, check out our Tumblr. 18+ only.

Thanks for the review, Cindi! So glad you enjoyed hating Blake as much as I hated him when I wrote the story. Lol. And threesomes are always a great idea, right? What could possibly go wrong? 😉

I really did love hating on Blake. You wrote him as the perfect bastard. Of course you love the GIFs. You’re a perv…. as is proven by this story. 😉

Oooh, the pics go so well with the words and the story. Great Review, Cindi 🙂 🙂

The novella is so much more than people will expect. ‘If you’re open-minded pick it up, people. Read it.’

PS: Is it me, or does the cover model look a little like Devon? Hmm…beware 😛

Thanks. I had entirely too much fun ‘researching’ for this review. 😉

I agree completely about it being much more than people will expect. It’s so different from most erotica stories out there, which is why I loved it so much.

Hahaha. No wonder my ears were burning. And I would like to say, the only time I’m a cheating bastard is when I play Monopoly or The Game of Life (because people always let me sit way too close to the bank). 😉

Thank you both for your kind words about this little story. These characters took me on a wild ride, and I’m glad to see that translated. Now I’m off to keep working on this new piece of smut that I’m really excited about. 🙂

Even though I haven’t had a lot of time to read lately, I just downloaded this one. I couldn’t resist after that review. 🙂 Love the GIF’s. 😀

Thanks, Lisa! It’s a good quickie for someone who doesn’t have a lot of time. I can’t wait to hear your thoughts on it.

I had entirely too much fun researching GIFs for this review. 😉