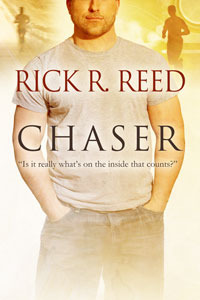 A unique book about learning to love what’s on the inside instead of the outside.

Caden DeSarro is a chubby chaser.  You know what that is.  It’s when someone is strongly attracted to those who are considered overweight.  Caden himself is fit and trim but for some reason the only men who seem to do it for him are those with a little more meat on their bones.  For his best friend Bobby, on the other hand, it’s all about looks and physique.  Bobby takes the word shallow to a whole new level.

A conversation with Caden’s new therapist…..

If you do not get where those lines came from then I am obviously a whole lot older than you.

When Caden sees Kevin Dodge in a bar bathroom he falls into instant lust.  Kevin has a few extra pounds on him and he is exactly the type of man Caden wants to spend time with.  Unfortunately, their first meeting doesn’t go well when Caden accidentally almost urinates on the other man.  Embarrassed, he rushes out of the bathroom and the bar assuming he’d never see the man again…. and scared of what would happen if he did see the man again. Caden had obviously been checking him out at the urinal.  What would the other man think?

On the train home later who should Caden see only a few feet from him but the man from the bathroom?  Working up his courage he approaches him (“If I promise not to piss on you, can I sit here?”) and one thing leads to another and they end up back at Kevin’s apartment spending the night together.  The sex is hot and the two men obviously can’t get enough of each other.  Each one is convinced that this is more than just a random hook-up.  They want to get to know each other beyond the bedroom and see where it leads.  Sadly, there is an emergency at home  for Caden and he has to leave for a few weeks right as he and Kevin are getting started.  Kevin is convinced that no way would someone who looks like Caden really be attracted to him and his extra weight.  When Caden leaves for the family emergency Kevin makes it his mission to become the man he has no doubt Caden really wants.  He starts dieting and exercising and before too many weeks have passed, Kevin is a whole new Kevin on the outside. He’s buff, he’s hot and he is no longer carrying around forty extra pounds.  During countless conversations with Caden while he is away, Kevin chooses to not tell him what he has been up to.  He wants it to be a big surprise when Caden walks back in his door.  A surprise it is, no doubt, and Caden does not react even remotely the way Kevin expects.

Now let’s meet Bobby.  Bobby has been Caden’s best friend for five years.  Bobby is the ultimate GQ model type…. totally gorgeous and he can have any man he wants.  He and Caden have never hooked up but they don’t need to.  They are friends only and not the kind with benefits. Bobby has standards when it comes to the men he hooks up with.  They have to be FG (fucking gorgeous), no one over forty, no one overweight, nobody effeminate. They must be hot, in shape, educated and make good money.  As shallow as he is right off I liked Bobby immediately.  That like went away the more I read about the so-called good friend Bobby.  There are some funny moments with him however.

Bobby had just abandoned Caden in the bar for a hook-up with a big manly man, Dreyfus.  They get back to Bobby’s apartment and the big manly man wasn’t quite so big everywhere.

He had read somewhere about a condition known as “micropenis” and wondered if here it was, staring him in the face, eye to eyes.  There is no doubt the little devil was excited.  The tiny cock pointed straight up at Dreyfus’s perfect six-pack, waxed as clean and smooth as a baby’s bottom, if that tot had an ass fashioned from cast iron.

Dreyfus grabbed the back of Bobby’s head and savagely fucked his face.  Or at least it would have been savage, if Bobby had felt he was being orally penetrated by something larger than a baby carrot.  No worries about gagging tonight!

The reader can see from the very beginning that while Bobby may be shallow he is also looking for more than hook-ups and one-night-stands. I found myself feeling sorry for him as I read his internal dialogue.  It did not take long before all that sympathy went out the window.  Bobby is a horrible friend and this is made obvious farther along in the book.

Caden’s reaction to the new Kevin is appalling and the reader is made aware that Bobby is not the only shallow character in this book. It’s hurtful for Kevin and I, the reader, was furious.  Kevin did so much in order to be the man he thought Caden wanted only to have Caden make it clear that he didn’t like the newer version.

I am not going to go into all the details of what happens between Caden, Kevin and even Bobby’s connection to them.  I will say that I loved Kevin from the get-go and loved him even more as the story played out.  Caden and Bobby, on the other hand, lost any love I may have had for them.  I tried to get it back for Caden but I couldn’t find myself to do so.  Bobby is a vindictive, selfish bastard and a horrible friend.  Without giving it away I can’t say more than that.

Overall, this is an enjoyable read.   I found myself smiling and even laughing a bit early on. As much as I didn’t like two of the characters, I did like how everything played out.  My only complaints are these:  One, I wish it would have been a few pages longer as I felt that the ending was rushed, and two, I would love to have seen more in regards to how the Bobby thing played out. Otherwise, another really good book by Rick R. Reed.