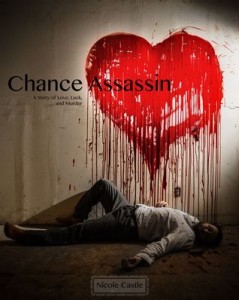 Sixteen-year-old Vincent Sullivan is down on his luck.  He has nowhere to live, no job and no prospects. Desperate, he accepts what he thinks is the kindness from a stranger, Charlie.  What he doesn’t know is that stranger is anything but kind and he has plans for young Vincent. Charlie sends Vincent on a ‘job’ that is supposed to go off without any complications.  Instead, Vincent is almost killed and is forced to defend himself. Somehow he manages to stumble a mile through snow and with a knife wound to the motel where Charlie is staying. Weak from blood loss, he somehow manages to knock on the door only to collapse moments after making eye contact with a man who opens the door, a man who is definitely not Charlie.  When Vincent wakes up his knife wound is bandaged and he is in a room with Charlie and the stranger.  The stranger is Frank and he is the most handsome and sexy man Vincent has ever seen… early thirties maybe, beautiful green eyes and he hates Vincent on sight.

Vincent is young but he is no stranger to sex… or survival.  He lost his parents years earlier and was forced to do whatever was necessary to survive.  Meeting Charlie was supposed to be his way off the streets and out of the beds of random strangers who he used to survived.  It doesn’t take long before he realizes that Charlie is a horrible human being who only cares about himself… and money.  Frank works for Charlie though in reality it is the other way around.  Without Frank Charlie is nothing but a nasty old man.

During Vincent’s recovery from the knife wound, Frank is there often though he never speaks and he rarely acknowledges Vincent. Charlie brings Vincent food when he feels like it but that is the extent of his taking care of the injured teen.  Vincent is eager to learn all there is to know about Frank but Frank is not talking (literally) and Charlie isn’t forthcoming with much information.  Vincent eventually gets Frank alone and over a period of time the two begin a reluctant relationship though not the type that Vincent desperately wants with the older man.  Frank is straight… or so Vincent thinks… but even if he was gay he would not be having sex with an underage boy.

Frank is a paid assassin and has no problem killing as long as the price is right.  The ‘mark’ can be good, bad, whatever.. Frank doesn’t care as long as he gets paid.  One day he shows up back at Vincent’s motel room only to find Vincent in trouble (thanks to Charlie).  Vincent, of course, has not gone down without a fight and Frank walks in as the boy is trying to defend himself.  The way he does this immediately puts a mark on his head and Charlie orders Frank to kill him.  Frank agrees… for a price.  What Charlie doesn’t know is that Frank and Vincent have become friends (though the word friend is probably not the correct word to use) and Frank has no intention of following through on the murder. They set it up where Charlie believes otherwise and they go across the country with Frank continuing to do his job with Charlie believing that Vincent is dead.  Shy, quiet Frank gradually comes out of his shell and the two become very close only not as close as Vincent would like.

This book is similar to Angel and the Assassin by Fyn Alexander in some ways.  In each book there is a paid assassin who has been ordered to kill a teenage boy but the assassin does not follow through and ends up taking the teen on the run with him.  The assassin begins a sexual relationship with the teen and they end up falling in love.  The two books are even similar in specific things they do while on the run.  However, and I need to stress this highly, that is where the similarities end.  Similar, but not exact.  Frank is the polar opposite of Kael and Vincent the same with Angel (though Frank does call Vincent ‘angel’ often).  I am only pointing out the similarities as I noticed them early on and I loved the Angel and the Assassin series so of course they would stand out for me. Chance Assassin:  A Story of Love, Luck and Murder is its own story.  I cannot stress that enough.

Another thing that needs to be stressed is that there is no sexual contact between Frank and Vincent while Vincent is sixteen.  This is not one of those types of books.  Vincent, a teenager, also has experienced enough in his lifetime where the reader feels that he is older at times. He still has his typical teenage boy moments but at no time did I feel funny about him and Frank once the intimacy started.

Over a period of two years, Frank and Vincent go from place to place with Frank doing jobs for an unknowing Charlie.  Eventually Vincent wears him down and Frank begins training him to do what he does: kill people for money.  Vincent is a natural right off and in no time at all they are a team.  Only later does Frank finally give and begin a sexual relationship.  For a year Vincent has tried to get him in his bed but Frank balked.  The way this is done is hilarious.  Vincent is convinced that he is in love with the older man and he makes passes at every turn. Frank’s response is always “Behave”.

I found myself laughing quite a bit while reading this book which is odd considering that it is about an assassin and his assassin trainee.  The kiillngs are brutal and they are described in graphic detail.  But yet I totally loved Frank and Vincent.  Frank is shy and quiet and not very forthcoming with information about himself and his past.  Vincent, on the other hand, doesn’t have a shy bone in his body and he never shuts up.  You can’t help but fall in love with him.  They are the ultimate in opposites but once they come together it is obvious that they are meant to be together… age difference be damned.

There are quite a few secondary characters and back stories.  There are reasons why Frank refuses to walk away from Charlie and there are reasons why Vincent is the way he is… meaning overly sexual.  Little by little information is brought out about each man.  I could not put the book down until I found out everything.  When Charlie finally catches up to them and secrets are revealed, Vincent is put in a very dangerous situation that he almost does not survive.  The author pulls no punches in the brutality of what happens to Vincent.  She pulls no punches in the brutality of anything up to this point.  There is no sugar-coating or off-page violence.  It is all written brilliantly front and center with all the gory details for the reader to see.

This is a very good book.  It was a freebie on Amazon so I admit to going into it hesitantly.  It was also long by my standards coming in at close to 350 pages.  Throw in the fact that this is a debut novel and I almost didn’t read it. Something made me give it a shot anyway and I’m glad I did.  Had I not taken a chance on another Amazon freebie a few months ago I would not be part of this blog.

My only complaint is this and other reviewers obviously agree with me …….. Up until the 85% point on my Kindle the story was full of action, murder, secrets and Vincent and Frank coming together as a couple through it all.  The book is literally nonstop action and I found myself frustrated if I had to put my Kindle down even for a little while. But at around 85% or so new secondary characters are introduced and they play more of a part of the end of the book than the two main ones.  Not only did the action come to a halt but it took on an entirely different turn.  Frank and Vincent go from being killers without a conscience to being sweet.  Don’t get me wrong, I am all about sweet in my books but not when it happens as suddenly as it did in this one.  The new characters, who are people from Frank’s past, literally take up the entire last 15%.  Granted, Frank and Vincent are still center but I felt that by taking the book in such a sudden and different direction that it downplayed all that the two men had endured up to that point.  Unlike some readers who wanted to see them go out in a blaze of gunfire, I wanted to see them survive it all and come together as a long-lasting couple… but not in the way it was done.  There is an epilogue that I ended the book at a loss in regards to how I feel about it.  It shows Vincent and Frank later but I don’t think it tells how much later.  What happens during those few pages did not, in my opinion, further the story with the exception of Frank finally doing something he had always dreamed of doing and even that is downplayed.

Overall, a fantastic book that took an unexpected turn.  Up until what I mentioned above this was a solid 5-star read for me.  Had the author continued the story in the same vein it would have ended as one.  By making such an abrupt change I find myself having to drop that rating a little and I hate that because up until that part it was one hell of an amazing book.  All in all, it ends well and Frank and Vincent finally get their happily-ever-after.  There is a lot of humor in this book on top of the violence.  When I can laugh during a brutal scene that says something about the talent of the author.

It should also be noted that this book is self-published and I have to say that it is one of the best edited self-published books I have ever read. I saw a couple of inconsistencies (that others may have missed) but I saw very few editing issues.  I will definitely read any future books written by Nicole Castle.

The cover is perfect.