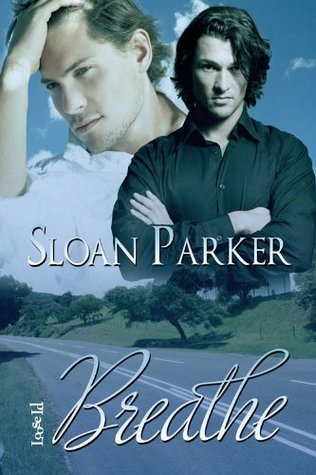 A book I read a while ago. By one of favourite writers, Sloan Parker. For me, this is her best work. An emotionally deep and beautiful piece of writing. Wonderfully psychological.

Breathe is a beautiful, aptly named book. None of the characters in this book can breathe, not the MC’s Jay and Linc, not Jay’s family (the Millers), not Katie’s family (the Shaws), not Linc’s family (Nancy and her 3 children).

Breathe is a love story but it is also a study in abject sorrow, guilt and blinding bitterness. What those emotions can do to people, particularly if there are other cracks underneath in the first place. Cracks like trying to hide your true sexuality, a happy, middle class marriage facade, the loss of an only child, believing you’re inadequate, feeling overly responsible 24/7. Death and its aftermath cannot be handled (properly) when there are other things to deal with which are also important yet being neglected through denial or dysfunction.

Twelve months after his wife Katie’s death ,Jay Miller is trying to handle her loss with an emphasis on what she was – happy, kind, caring, understanding and loving. Everyone else around seems to want to drag him under the ground where she now lies. You can understand their grief, but no one is allowing Jay to deal with it in his own way. Even Jay’s own mother is morbidly obsessed with her daughter-in-law’s death. Jay wants to move on while still loving her, honouring her memory, yet no-one in the melded families can allow him to do it – it’s hard to fight negativity on your own. Then Jay meets Lincoln at Sonny’s, a local pub, and sexual sparks fly. For the first time in a year he feels like there’s something other than despair. Unfortunately, because of who Linc is, their interlude quickly becomes a shock (of epic proportions) and things become immensely complicated.

Lincoln is incredibly guilt ridden over the death of Jay’s wife, Katie. It is so sad yet it is something that could happen to any person in the blink of an eye on any given day. Katies’s death is nothing premeditated or callous, yet Linc feels the weight of the world over the event. He also feels the pressure of his sister Nancy’s lousy partners and her struggle to live day to day, in spite of working two jobs and trying to raise three children. Lincoln has been to jail but still doesn’t feel he’s paid his debt. It’s hard to fight guilt when you feel so lost. He has a strong connection to Jay but upon learning who he is, finds their relationship equally complicated.

On top of two men with an intertwined, difficult past trying to work their relationship out, there’s the mystery of cruel notes being sent to Lincoln with even crueller actions being threatened against his sister’s children. Linc and Jay see the notes as a travesty and decide to find out who’s behind them. It is never telegraphed who it is and I was left wondering who it was until the reveal.

I truly loved this book. Little things like emphasising the word breathe in relation to a feeling or a situation. How things are slowed down or noticed more, which is what happens when a significant life event occurs. Things seem more intense, there can be a painful clarity which is there. I loved Jay and Lincoln, they were good, decent men, thoughtful of those around them. Both men needed/deserved to have a second chance at life, at love. Nancy and her children were such a delight, they lit up the pages for me. I loved Katie, even though she was dead she was very much alive thanks to Jay and Linc’s interactions (and some wonderful writing.)

Breathe is many things. It’s a hard read at times. Definitely emotional. A love story brimming with life and passion, in spite of the subject matter. Jay and Linc have wonderful chemistry together – sometimes angst, sometimes sexual – no matter what, passion is always there. It could have so easily been tacky or awkward but Sloan Parker handled it with ease and comfort. If you like angst thrown in amongst your romance and sexual heat, if you love second chances, and a well written gay romance, then Breathe won’t disappoint. More than 5 Stars!