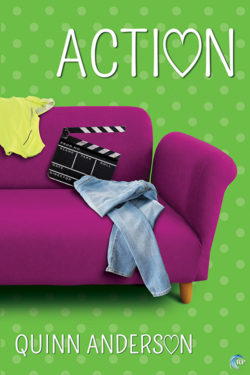 Pete is in a rut, though, and he knows it. And what’s worse, his boss knows it. If he can’t reignite his passion for the biz, he’s going to have trouble paying his none-too-cheap college tuition.

Quinn Anderson is an alumna of the University of Dublin in Ireland and has a master’s degree in psychology. She wrote her dissertation on sexuality in popular literature and continues to explore evolving themes in erotica in her professional life.

A nerd extraordinaire, she was raised on an unhealthy diet of video games, anime, pop culture, and comics from infancy. She stays true to her nerd roots in writing and in life and frequently draws inspiration from her many fandoms, which include Sherlock, Harry Potter, Supernatural, Lord of the Rings, Star Wars, Buffy, Marvel, and more. You will often find her interacting with fellow fans online and offline via conventions and tumblr, and she is happy to talk about anything from nerd life to writing tips. She has attended conventions on three separate continents and now considers herself a career geek. She advises anyone who attends pop culture events in the UK to watch out for Weeping Angels, as they are everywhere.

Her favorite television show is Avatar: the Last Airbender, her favorite film is Tangled, and her favorite book is Ella Enchanted. She can often be spotted at conventions, comic shops, and midnight book releases. If you’re at an event, and you see a 6’2” redhead wandering around with a vague look on her face, that’s probably her. Her favorite authors include J.K. Rowling, Gail Carson Levine, Libba Bray, and Tamora Pierce. When she’s not writing, she enjoys traveling, cooking, spending too much time on the internet, screwing the rules, finding the Master Sword, guided falling, consulting for the NYPD, guarding the galaxy, boldly going, and catching ’em all.

To celebrate the release of Action, one lucky winner will receive a $10 Riptide credit! Leave a comment with your contact info to enter the contest. Entries close at midnight, Eastern time, on June 10, 2017. Contest is NOT restricted to U.S. entries. Thanks for following the tour, and don’t forget to leave your contact info!

Thanks so much for having me on your blog! It’s been such a fun tour. 😀

Looking forward to giving the book a read in my free time. Good luck with the release!

Congrats on the release!

Congrats and thanks for the post. Whew, sounds like quite the hot scenario for a story. It also sounds like you’ve got the background to do it justice. It’ll be interesting to see how the dynamic setting plays out. –
TheWrote [at] aol [dot] com