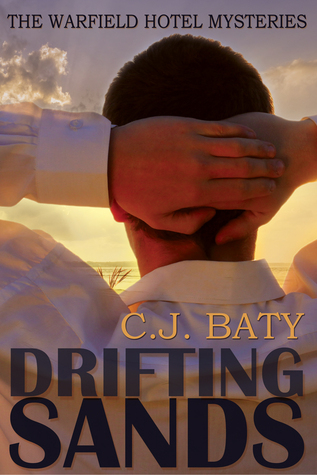 As he approaches his fortieth birthday, Justin Warfield feels alone, drifting like the sand that blows along the beach near his family’s hotel. He has done exactly as his father wanted. Married the right girl and carried on the family tradition of running the Warfield Hotel. On paper things seem perfect, but happiness hasn’t been a part of his life for a very long time.


Marcus Drummond once spent a summer with his best friend Peter at the Warfield Hotel and fell hard for Peter’s much older brother. Five years later he’s back, and this time he hopes that Justin will see him as more than his kid brother’s friend.


Sparks fly when the two meet again, but there are a few things standing in their way. The closet that Justin has himself buried in and someone on a killing spree, dumping bodies on the Warfield beach . . . victims that indicate Justin may be involved in some way.


C. J. Baty lives in southwest Ohio. Her heart, however, lives in the mountains of Tennessee where she hopes to retire some day. The mountains have always provided her with inspiration and a soothing balm to the stresses of everyday life.


The dream of writing her own stories started in high school but was left on the back burner of life until her son introduced her to fan fiction and encouraged her to give it a try. She found that her passion for telling a story was still there and writing them down to share with others was much more thrilling than she had ever expected.


She has a loving and supportive family who don’t mind fixing their own meals when she is in the middle of a story, and a network of friends who have encouraged and cheered her on in her quest of being an author.


One thing she has learned from life and she is often heard to say is: “You are never too old to follow your dream!”