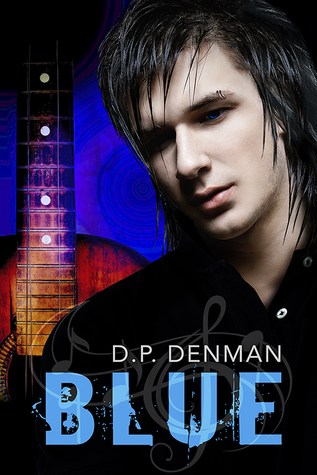 Long before he was a successful songwriter and black-belt badass, Blue was a survivor of an ultimatum that cost him everything.

It was supposed to bring a new beginning, a new life. Instead, it left him near death with nothing to rely on but the kindness of a stranger. Hostile and headstrong, Blue needs a calmer influence to balance his fury. Someone to save him from himself.

Brady’s life was quiet and orderly until fate sent him a blue-eyed hurricane. Bursts of temper and flashes of despair batter his efforts to calm the storm in a man he doubts he can tame. One drowning in the wreckage of his past.

With a head full of lies and a body full of scars, Blue must work to rebuild his life with the help of a man determined to prove sometimes trust is worth the risk.

Blue features one of the most popular characters from the Saving Liam saga! Destined for greatness, he reveals the past that made him the scarred bad boy readers love.

I wanted to love this book. I liked it but I had some niggles with it. It has a lot of what I’m looking for in my reading – psychological aspects, perhaps the darker side of life, an age difference, the idea of anything that denounces reparative therapy, a kinder, patient partner to the one who is a tortured soul.

Blue started well. Some drama and depth – a young man ends up in the backyard of another man’s property, thin, pale, and scarred very badly. He can’t say what happened, doesn’t seem to remember a lot. The other man, Brady, makes sure he is taken to hospital. He cares enough to visit to see how he’s doing. From there, Brady ends up taking him home to care for an angry depressed Blue – named for his eyes, his gown. Brady has the means and he makes sure Blue has what he needs. Brady also backs off when it becomes clear men frighten the younger guy. His housekeeper, Mary, is older and motherly and able to work with Blue when Brady can’t. Brady is a good man, he’s there when Blue’s family are less than useless and to blame for what has occurred.

Nothing about that scar was insignificant to him. It was the symbol of deceit. It also marked the point where his life had ended.

Blue is difficult. He’s traumatised and rebels at people in authority, including those who want to help. That’s fair enough, it’s in keeping with what’s occurred to him – reparative therapy his family sent him to to ‘cure’ him, religious fanatics and sadists, his age – eighteen-ish – and level of related impulse control. Brady makes sure Blue goes to therapists. There are two. The counselling aspects were well handled, but to me it felt a little like work, which is good and bad. Good that I could say it was sound and bad because, well, like work. After the first go-round, Blue wants to move on with his life and get back out into the world. Brady doesn’t like it but Blue is legally an adult and he needs to be around people his own age. Unfortunately, this does not pan out well for Blue and Brady is called back to hospital as Blue’s designated contact in emergency.

“The kid likes you, obviously,” Aimee motioned toward the hall, “and you already saved his butt once. What’s one more?” Her smile spread to a grin.
“It’s a nice idea, but he’d have to agree to play the role of considerate houseguest, and I don’t think that’s what he has in mind.”

Here is my main gripe, I could not see why Brady fell for Blue. Not at any point could I feel the catalyst for his attraction, it’s simply stated he likes the vitality and energy of younger guys. We have to take it on good faith that’s (part of) the attraction. Okay, I’ll buy that at times if I can see some growth in/of the relationship. Blue had some serious emotional issues to overcome and he lashed out at Brady constantly. He feared being touched in any way for quite a bit of the book. Totally understandable, but he hit “dick” territory nearer the end. The argument at the club would have had me saying, “Blue, I like you a lot, but I know you still have issues you’re fighting, which I get, but I’m leaving the sex and relationship off the table and we’ll be friends. Being combative and finding it impossible to apologise means I’m out until you’re feeling healthy and stable.” Or something along those lines.

Also, and this is a big reason for a lot of issues, Brady is ‘close to forty’, he’s wealthy, attractive, kind, caring, patient and well adjusted in every way. Brady could seriously have  his pick of so many guys. Their interests were not close, I don’t even now what Brady liked, to be honest. His work. Blue. Younger guys. There was this glaring difference in the maturity level of these MCs throughout. I did not see why Brady fell for Blue – yep, my big issue – or how Blue could fall (at all) in a matter of months, given his hatred of being a “fag,” his ongoing problems fighting indoctrination from family and the camp he was at. His fear of being touched.

In regards to the relationship aspects of the book, nothing felt organic to me. I really didn’t get the reasoning for these guy being together. It’s not enough for the author to tell me that tough times binds people. It does… but it’s not enough for love. I liked Brady, with reservations. However, Brady should have been a little more passionate, he felt flat. He should have been more careful about entering a relationship with a young guy dealing with so much trauma. As for Blue, he was never anymore than okay for me and I really should have felt more attached to him. I started out with the utmost empathy but that kind of devolved to me wanting to give him a talking to. Maybe I’m just old and that was my issue.

Technically the writing is fine, the book is well edited, like I said, the therapy is solid. And its heart is in the right place. I also love an age difference, but not when I can see one guy is very young and the other is much more suited to a guy around his own age, or at least a mature younger guy, it almost felt like a midlife crisis meets a young guy who hooks up with a wealthy older guy. Even their names for one another fit that profile – “cub” and “poppy.” And Brady forgave so easily, after the club debacle I would have liked a lot more from Blue, a consequences-for-your-actions outcome.

“I love you, cub. I really do.”
Blue dug fingers into his ribs. “Deeper, Poppy. I want to feel it.”
He gave Blue what he wanted. It wasn’t enough.

On Goodreads I have a lot of status updates which would give any prospective reader a good idea about the writing style and direction of the book. To be honest, there are more than a few quotable lines from the book. I can see where this would be popular for those who may have read Saving Liam, as apparently Blue is a much-loved character from that book. I think a more mature, emotionally stable Blue would be an interesting Blue and maybe in Saving Liam he is. I’ll pick up that book up because I’d like to know. However, for this book it’s 3 Stars!

I can tell I’d have the same issues you had with this story. I LOVE books with characters who have substantial age differences, but sometimes the maturity level of one isn’t enough to make it work. When I started reading your review I immediately had sympathy (as I tend to do) for Blue. It didn’t take long for me to see that his issues went well beyond what I initially thought.

Age difference is a favourite for a lot of us in the romance genre but when there is a glaring maturity level it really does change the dynamic.

Blue had it tough and that was well written except – for me – it went into frustrating territory. Maybe if I read Saving Liam I would get him more. Still, I can see where the writer is good, and a lot of people have liked this book, so there is that whole, it may “be me.”