Blog-Versary: A Note of Thanks by Mickie B. Ashling: Third Son, Excerpt & Giveaway

A Note of Thanks by Mickie B. Ashling

I can’t believe it’s been twelve months since I was last here helping Cindi and Kazza celebrate their blog’s anniversary. The last year has been chaotic to put it mildly. What with the closing of several independent book distributors, declining sales across the board, politics, and weather-related events, it’s a wonder we’re still here. But we are, and for those of us who are hanging on by our fingernails—some better than others—I say well done!

Book reviewers are the life blood of our industry. While many blogs have closed, On Top Down Under Book Reviews continues to generate thorough, insightful, and honest reviews, a gift in and of itself. Join me in raising a glass to commend these lovely ladies, their guest reviewers, and anyone else who works behind the scenes. Thank you for boosting our morale—and chronically fragile egos—with the much-needed recognition thereby inspiring our muse, and possibly generating a sale or two, so we can keep on doing what we do.

Today, I’d like to share an exclusive excerpt of my latest release, Third Son, a contemporary romantic/thriller set in Hong Kong. Leave a comment to be eligible for the giveaway which is an e-copy of the book. Cindi and Kazza will choose the winner and send me your information at the end of October. 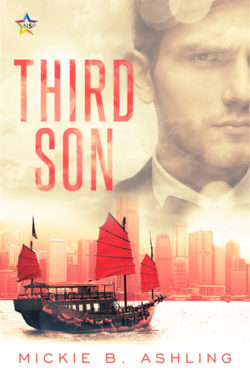 You can find Kazza’s review of Third Son here.

I decided to take him to Morton’s, the steakhouse located at the Sheraton Hotel & Towers on Nathan Road. It was on the Kowloon side, which would make it easier for both of us, and the food was excellent, although expensive as hell. He was worth it, though, and perhaps it would show him I was truly remorseful for my earlier behavior. On second thought, maybe it was a dumb idea. Gerard had more money than me and could easily go on his own, but…I’d already made the reservation. Having eaten there once before, I knew the atmosphere was conducive to private conversation, and there was a top-notch view. Gerard wasn’t a vegetarian, judging from our past meals, and even if he stayed away from red meat, also my preference, the seafood at this place was excellent. I hoped my restaurant choice wouldn’t be a disappointment.

I texted the info and asked him to meet me at six.

When Gerard arrived, I was sitting at the bar with my drink close at hand. His unrestrained smile set me at ease as much as the unexpected kiss. I was still getting used to his unapologetic PDAs. They were a lovely contrast to the furtive universe I’d live in with Peter for so long. He ordered a drink for himself, and they brought both Martinis to our table, which was in a choice location.

“This is an impressive menu,” he said after reading through the selections.

“I’m looking at it,” he replied with a playful wink.

“You bring out my good side.”

“That’s reassuring after my boorish behavior this morning.”

“We’re still getting to know each other, but you’ll soon learn I’m not the type of person who bears a grudge. I address the bothersome issue at once so we can clear the air. Unless the problem is insurmountable. Then I just end the relationship.”

“I’m not quite as evolved as you,” I admitted. “I cultivate mine.”

Gerard raised an eyebrow. “Are we talking business or romance?”

“I’m referring to business. I can be quite ruthless when I’m crossed. Love affairs, on the other hand, are my Achilles’ heel. I let my heart overrule my head. I’ve also been told I misjudge situations, this morning being a case in point.”

“It’ll take a while for us to smooth out the kinks, but I’m confident we can do it.”

“I have good instincts about people.”

We were in sync with food selections as well. Shrimp and scallop appetizers to start, and halibut fillets drizzled with lemon scallion sauce for the main course. Dinner was delicious, the service impeccable, and Gerard’s good company made the outrageous price tag seem like a trifle.

We walked along Nathan Road afterward, to work off some calories, but mostly to stretch out the evening. It was too early to call it a night, and even though we both knew we’d end up tangled in Gerard’s bed, we decided to stop in at a club for an hour of dancing. It was loud and vibrant, reminding us of our night in Vegas. This time, we didn’t head for a dark corner but joined the throng on the dance floor. Gerard was graceful, and I especially loved the feel of his muscular body pressing up against me in public. He was blatantly possessive and didn’t give two fucks what we must have looked like shamelessly grinding against each other.

“You ready to go?” he asked when I began humping against his leg.

“Unless you want to fuck right here.”

We left soon after, caught up in the excitement of what was to come. I wanted to lay him out on the bed and have my way with him all night. He’d indicated he was willing to switch, and the very idea of topping him was making me light-headed. Peter had never allowed it.

Congratulations on your successful five years of blogging!

Thank you so much for your kind words and support!

It’s lovely to have Mickie B Ashling back on for our blog anniversary and I really, really enjoyed Third Son. Great Hong Kong backdrop too. I have a friend in Hong Kong right now and I’m envying her time there when I look at her pics on Facebook 🙂

Thank you Kazza! Third Son is a slight departure from my standard romances and I’m thrilled you enjoyed it. Best wishes for your continued success.

Thank you for the post Mickie and for the excerpt of your newest book. It looks fantastic.

I love the Hong Kong night life and the people so much. Every time I visit, the energy is unlike anywhere else in the word. This except makes me interested in reading the Third Son.

Happy 5th and thank you for the giveaway.

Congrats, Mickie, and thanks for the excerpt. I love gay mysteries, and this also has a wonderful setting that I’d like to learn more about through reading.