Hi, I’m Kim Fielding, and I have a new book releasing in two days. As if that wasn’t exciting enough, Ante Up stars a 180-year-old Croatian vampire! Our hero vamp, Ante, falls for Peter, who’s not a vampire, but also isn’t exactly human.

If you’ve read my books before, perhaps it won’t surprise you to learn that a vampire—a monster—is the hero. I’ve had vamp heroes before, and other monsters have also starred in my books. A couple of wolf shifters. A couple of ghosts. A golem. Some extraterrestrials. A demon. (Another demon plays a small role in Ante Up; she has tiny hellhounds.) The tone and setting of these stories vary a good deal, but one theme they have in common is empathy and sympathy for the monsters. In fact, it often turns out that the monsters are a lot less monstrous than some human beings.

I’m pretty sure I’ve always been on the monsters’ side. One of my earliest memories was sitting in the living room on a Sunday afternoon, watching the 1931 Frankenstein movie on TV. I clearly remember being really sad over the monster’s death. The poor thing! So mistreated and misunderstood!

Now, Dracula was somewhat less sympathetic. But even with him, the deaths he caused weren’t just random savagery. After all, a guy’s gotta eat. And he had the broody/mysterious/sexy thing going on, which was cool. Plus a cape. I always kinda dug the cape.

Other monsters worked their way into my heart over the years. One year on Halloween I dressed up as a bandage-swathed mummy. Another year I was a purple-and-green alien. And my love of things skeletal goes so far that I have a skull tattooed on my leg.

I bet a psychologist could come up with all sorts of interesting explanations for this inclination of mine. Heck, I am a psychologist, so I can come up with several on my own. For one thing, I was always kind of a weird kid. I was never a social outcast, but I was also never part of the popular crowd. And I certainly never identified with the kind of female roles that were—and are—so often offered as desirable. I’m no princess, no damsel in distress.

But deep workings of the psyche notwithstanding, I think one reason I find monsters attractive is that that while traditional heroes are often boring and one-dimensional, the best monsters have depth to their flaws. There’s a reason why they are what they are, and often that reason is not really within their control. Another aspect is that we can see monsters as having the capability of reforming themselves and becoming good. Disney’s adaptations of Beauty and the Beast are good examples of this at work. The man who’s supposed to be a hero—Gaston—is shallow, vain, and actually quite cruel (though he does get a really cool theme song). The Beast, on the other hand, while surly and formerly self-centered, is also capable of mercy and love.

I should note here that some of the monsters in Ante Up truly are just that. There’s a gangster vampire who’s been responsible for all sorts of mayhem and who’s after Ante and Peter. Yet even he has sorrows in his past, and there’s a rationale behind what he does.

How about you? Do you have a favorite monster? Comment below and enter the Rafflecopter for a great giveaway! 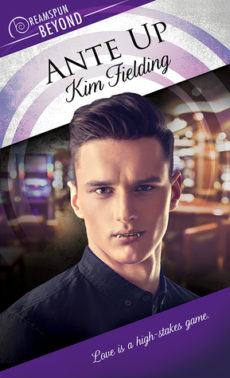 Love is a high-stakes game.
A century and a half ago, Ante Novak died on a Croatian battlefield—and rose three days later as a vampire. Now he haunts Las Vegas, stealing blood and money from drunken gamblers and staying on the fringe of the powerful vampire organization known as the Shadows. His existence feels empty and meaningless until he meets beautiful Peter Gehrardi, who can influence others with his thoughts.
An attraction flares instantly, bringing a semblance of life to Ante’s dead heart. But the Shadows want Peter too, and they’re willing to kill to get him. As Ante and Peter flee, they learn more about themselves and each other, and they discover that the world is a stranger place than either of them imagined. With enemies at their heels and old mistakes coming back to exact a price, how can Ante and Peter find sanctuary?

Ante Up at Dreamspinner Press

Kim Fielding is the bestselling author of numerous m/m romance novels, novellas, and short stories. Like Kim herself, her work is eclectic, spanning genres such as contemporary, fantasy, paranormal, and historical. Her stories are set in alternate worlds, in 15th century Bosnia, in modern-day Oregon. Her heroes are hipster architect werewolves, housekeepers, maimed giants, and conflicted graduate students. They’re usually flawed, they often encounter terrible obstacles, but they always find love.
After having migrated back and forth across the western two-thirds of the United States, Kim calls the boring part of California home. She lives there with her husband, her two daughters, and her day job as a university professor, but escapes as often as possible via car, train, plane, or boat. This may explain why her characters often seem to be in transit as well. She dreams of traveling and writing full-time.

Gave this a shoutout on Twitter! I think you’re right about Monsters and the depths to their flaws.

My favorite Monster is… well, I don’t know if it really qualifies, but.. Gargoyles. All hearkens back to the TV cartoon show, The Gargoyles.

Something about something so ugly and fierce on the outside, seeing years of history and pain, and still maintaining their basic goodness.

Thanks for the shoutout! And I totally understand your love for gargoyles. I used to have a bathroom decorated in a gargoyle theme. 🙂

I have to add my ‘monster’ love – vampires. Adore vampires. I have them on posters in my house. Lots of books about them and movies and TV shows. I blame Bram Stoker.

Oh, how I love monsters in books. If I were to try to come up with a favorite I don’t think I could. I guess I’m especially partial to vampires. Good, bad, neutral, I’m always entertained by vamps. Ante Up looks really good. I’m adding it to my TBR.