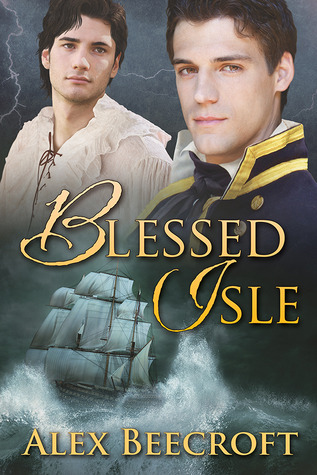 First of all, I’m must say the following, this is a beautiful piece of writing. I hope it gets a good reading audience. It is LGBTQ fiction, very much grounded in history. If you go into Blessed Isle thinking two men + an island + a shipwreck = wild man love you will be severely let down. I’ll be up front and say there is no sex in this book, it is alluded to but it is a short sentence and then off page. And yet it is gloriously romantic and sensual –

When we woke, that first morning, we made love….It was sweet and weary and gentle, just kisses and the stroke of calloused palms.

Every night it is the same. We tryst with great mutual pleasure, and I, sated, fall asleep….

I’m not quite sure how to describe the narrative. While it is not strictly a series of letters, I guess epistolary would best describe it as Harry writes a diary, in which Garnet has his two cents worth as well. The book starts near the end and ends slightly further along, with journal entries and recollections in between. Both MC’s directly address the reader, at times, as if a letter is being written to us, and indeed that is the case. Harry says it best here –

I think of it as a message in a bottle, cast out into the seas of time. May the future reader know what we have not been permitted to say in the present: that we are happy….

It is important to me that someone should bear witness to our love.

The language used by Ms Beecroft is a delight to the senses. It is utterly charming. I couldn’t help but love Harry and Garnet for their extremes in personalities and for the decent men they are.

Harry Thompson is the newly appointed Captain of the HMS Banshee which is about to head off to Australia to drop off its payload of convicts as Captain Arthur Phillip has proved can be done quite successfully. He is career oriented, ambitious and class conscious, only in that he doesn’t come from wealth, needing to break through his working class background in order to succeed. Desirous of becoming a Captain in his own right –

In 1784 I was made lieutenant. The most junior lieutenant of the Barfleur under Admiral Lord Samuel Hood. A man like myself, with no family connexions, may serve his whole life as a lieutenant, but I was determined that should not be my fate. If I required either a miracle or an act of heroism to secure a captain’s rank, I would produce one. (Which he most certainly did produce.)

He did not want anything to get in the way of his service, responsibility to the navy, his country, his duty, his command. When he meets Lieutenant Garnet Littleton on his ship, the HMS Banshee, he, and Garnet, likened it to being struck by cupid’s arrow and yet he denied and denied and denied his desires for Garnet. Always duty, plus fear of being hanged, over all things –

We had not spoken of this thing between us. In truth I had avoided him, hoping that he would have the sense to leave it alone, that the attraction would die of its own accord for want of encouragement.

Lieutenant Garnet Littleton is so carefree. Of upper class birth, albeit the fifth son. Younger, sure of himself, knows he is a handsome man, and not ashamed of his feelings towards men. He is an adrenaline junkie, likes to take risks and wants to take one with Captain Harry Thompson once he meets him. When Garnet makes his feelings known to Harry, and he does, Harry is concerned about being pilloried, losing twenty years of hard work. He does not wish to show his feelings for Garnet, for any man, even though he is smitten by Garnet. Garnet, in true Garnet style, asks Harry –

“Am I not worth the gallows?”

On their journey the Banshee and the others in the small fleet are struck by Typhus, tiring sailors, bad weather and having to allow the remaining convicts to help. The convicts, having nothing to lose, mutiny, and add to the storms that ravage them. All are death knells for the Banshee and it’s accompanying fleet. The descriptions of the seas, the weather are so vivid and so well done –

…we plummeted down the troughs of waves that had become mountainsides. The sky had met the sea, and we breathed water only a little less dense than the ocean. The tear and smack and boom of lightning raced towards us on clouds like boiling tar.

Also the reaction the men have to their circumstances. Garnet and Harry see it as better, more fitting to die at sea than ravaged by old age and maladies on land. So typical of the animal –

Garnet looked up at me, this distant lightning reflected in his eyes. “Dear God, sir,” he laughed, his smile wide and bright. “It isn’t often you get to watch your own death flying towards you across the water. It’s just as the poets say. It’s sublime!”

With all ships lost, Harry and Garnet land on an island somewhere near Tahiti and set up camp for eight months. This is when all things relationship truly develop. During this time Harry and Garnet learn much about each other. And Harry, for the first time in his life, feels happiness and freedom to be who he is, a man desiring another man. A man falling in love with another man. Garnet eventually grows sullen and longs for civilisation again, whereas Harry enjoys the solitude and freedoms he has here with Garnet –

“You and I, it’s the first honest thing I’ve ever done. And that’s because this place has given me the freedom to do it.” A little sigh of amusement mingled with melancholy. “Your prison is my refuge.”

I think I have put a lot down in this review already and what occurs after their time on the island is best read.

There were so many things that I loved about Blessed Isle. The title is perfect for the story and what it means. The love these two men have for one another in a time when it was strictly forbidden and looked upon as an utter abomination is heartbreaking to think about. That loving someone meant a death sentence. Yet think about it you do. I hold the highest esteem for the men who were the great adventurers of their day – these ships were small, think Sydney to Hobart Maxi-yachts, that took on big seas, vast oceans, with little to no gadgetry to speak of. Amazing, stout men doing unbelievable things. Alex Beecroft is a poetic, romanticist. Does that sound right? Because it feels right as I write it. I was transfixed to my Kindle throughout the whole book. I loved it.

I love a well written piece with sensual notes and beautiful characterizations. I also like my historical fiction with accurate detail in the history, without being hit over the head with it. Here, there is a perfect balance of history, adventure and romance. Look up the HMS Pandora if you are so inclined, it was actually wrecked on the Great Barrier Reef here in Australia. Dig deeper and you will find that fourteen men did leave her. Lovely research and detail that I adored. Harry and Garnet are wonderful characters and I’ve not really touched much on their words to each other because they can’t just be plucked out and seem as meaningful and as truly heartfelt as they are in the book.

I’m going to end my review with some far better words than I can muster.

Why do I want to leave this record? Why not leave our story untold? It is dangerous to speak, let alone to commit the words to paper. My need to confess may be the death of us both. But it leaves a bad taste in my mouth that this love should go unrecorded, that posterity should judge men like myself, like him, by the poor fools driven out to grope strangers in alleys, all fumbling fingers and anonymous grunting. Those of us uncaught must perforce be silent. But one day, perhaps, when the world has grown kinder, this journal will be read by less jaundiced eyes. To them I will be able to say there was fidelity here, and love, and long-suffering sacrifice, and joy. To them I will be able to speak the truth.

This book was provided as an ARC via Netgalley in return for an honest review.

The reviewer also purchased a copy.