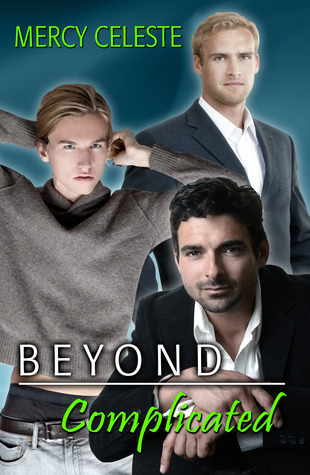 Purchase at: amazon.com, All Romance Ebooks

Well, this book is definitely perfectly named. The lives of the characters are well and truly beyond complicated; which makes the journey interesting for the reader.

It’s hard to review without spoliers so be aware.

It’s Liam POV in this book. When we meet him he’s working as middle management in insurance. It’s a living, but that’s it. He has a son, Kel, 17 years younger than him, his mother was ‘kocked-up’ when they were young. Kel is now 21. Liam is typical of a non-custodial parent having been through an acrimonious separation – he sees Liam weekends and when it suits the primary parent, in this case Kel’s mother. He has also been syphoned of every last dollar from day one to support Kel, and Liam’s family have been fianancially milked as well. So, no pleasantries there. The step father, who lives with Kel and his mother and siblings, is a sponging, nasty bastard, and the biological mother a bitch of the highest order. The whole family dynamic is dyfuctional with a capital D. Complication one.

Kel is having dinner with Liam one night and, unbeknown to Liam, he has organised for him to meet his new boyfriend/lover. Liam is blindsided by Kel’s new guy, Seth, as he is his ex partner, both personally and professionally, of 6 rather intense years – another complication.

Seth, the other MC, is now a lawyer. Not really loving what he does for a living either. He, too, is stunned because, in spite of how close Liam and he were, he never told Seth he had a child; plus, really, what are the odds of you fucking your previous significant others’s son? Yet further complications. Liam runs out, Seth catches up, sparks fly, then all kinds of complicated breaks loose –

This starts a chain of events that are better left to the reader than attempts by me to fully explain here. There are amazing emotional rollercoaster rides, complete with corkscrews, in this book that are best ridden by the individual to be fully savoured.

I want to say that both Liam and Seth infuriated me at times, but they also sucked me in and embedded themselves under my skin. I wanted to slap Liam for some of his behaviour, I wanted to hold him on other occasions, and Seth, you think you know someone so well and not get what you did might have been upsetting, or wrong? That your partner wasn’t acting? You also don’t get the right to be angry with Liam walking away, Seth. But, boy, you loved with a passion, so, yeah, like I said….embedded. Kel was a good ‘kid’, a manchild really, who continued to be put through the emotional wringer by adults that should have known better. I wanted to hug Kel. Let me tell you this book is not farfetched, these ‘adults’ exist in real life in droves.

I liked the dialogue, the language. In bed there was a porn quality at times, not always, between Liam and Seth, but you know what? In some significant, shape changing years of both Liam and Seth, sex is what they did, what they knew as a couple, as a business, thus it fit perfectly; plus, it was sexy as all get out. Which leads me to the fact that this book is erotically supercharged as in ‘I need a cigarette now, for god’s sake’ (and I don’t smoke). I loved the 3 MC’s together, particularly in bed, it’s fiction, I don’t give a damn about who was what to whom, and this, too, is complicated, you need to read the book.

The characterizations were pretty darn good. Seth, who idolized Liam as his mentor, lover and significant other during his 20’s ’til now. Kel, as a good looking, outwardly confident young man with a sensitive inner core; and a strength that comes from having to be older than your years; because you had to parent your parents and siblings. Plus, Kel had a unique love for Liam borne out of seeing one man as a constant in the sea of turmoil that was his life. Liam has a cracked veneer just waiting to break, right from the first passage you could sense it, and he was was intricately multi-layered. Liam’s behaviour post breakdown is typical, once you have an emotional trauma resulting in a psychotic break you can find it pretty hard to get back to who you were before, if you ever do.

The ending was satisfying for me. I wouldn’t mind another book, to see how they’re doing, goodness knows there’s enough material to do a sequel; if not I’ll live with the ending here because it was good, realistic.

I loved Beyond Complicated but, in full disclsoure mode, I have discovered that I really rather like Mercy Celeste as a writer, I instictively just seem to get her writing. This is just another example of what I mean.  I definitely recommend Beyond Complicated as a top-notch read.