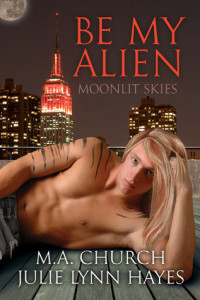 A fun, sexy novella about an alien who is abandoned on Earth and the man who rescues him.

Taz is an alien.  He jumped at the chance to come to Earth on vacation from his home planet of Trygos to spend time with Vorlod, a fellow Trygoshean who Taz has had his eyes on for quite some time. Taz is lonely and thinks that maybe Vorlod could be the one.  When they get to Earth, however, Taz finds out exactly what kind of alien/man Vorlod really is.  He leaves Taz high and dry for a fellow alien who conveniently had been traveling on the same spaceship to Earth.  It becomes clear almost immediately that Vorlod’s invitation is a big set up to make the other one jealous.  So what can Taz do?  He is stuck a million miles away from home with no money, no clothes, no way to contact anyone he knows back home. He is stuck in a big city all alone.  At the point of despair, Taz is wandering from window to window on the observation deck of the Empire State Building when he is suddenly shoved and falls into the arms of Reed, a handsome human that Taz had been checking out earlier.

Reed is the owner of an upscale men’s boutique that has a special room in the back that sells various kinds of sex toys and sexy men’s undergarments.  He is lonely and dreading Valentine’s Day that is only a few days away. Once again, Reed will have no one to share the day with.  When Taz literally falls on him he feels that his luck has changed.  A quick coffee date turns into a night of passion at Reed’s apartment. During the best sex Reed has ever had in his life, he discovers that his partner is a little bit different from his previous partners.  There are stripes that appear on Taz’s body the more aroused he gets for one.  Secondly, Taz has a tail.  A tail that does some pretty interesting things to Reed while he’s having sex with Taz.  That, my fellow readers, was one of those things that will make you go “Hmm….” even if it was quite sexy in its own weird alien kind of way.  Taz also purrs like a cat and has cat-like ways.  In a matter of only a couple of days alien and human fall head over heels in love with each other.  Taz decides that he has no desire to find his way back to his home planet and wishes to spend the rest of his days with Reed.  Unfortunately,  Vorlod has other plans and makes another appearance by grabbing Taz and forcing him to prepare for a return trip back to Trygos.  Reed is in a race against time to find his alien/man before it’s too late.  The way this happens is an “Awww…” moment.  They find each other and live happily-ever-after.

This is obviously not meant to be taken seriously but if one can suspend any and all belief for a couple of hours it is an enjoyable read.  Taz is adorable right down to his stripes and his furry little tail.  Reed is the strong one and is Taz’s protector.  There is insta-love that I normally don’t like but I figured if I’m reading a story about an alien and a human falling in love I can overlook that part. 🙂  I love the cover.

Overall, a fun story.  I will be checking out others by these authors.