Hi, and welcome to the Bane blog tour!

I don’t think it’s any secret that a lot of readers, in the wake of reading Strain, wanted more of Darius and Rhys. Already by that point I was brainstorming the pre- and peri-apocalyptic story that would become Juggernaut, but the further along I got on that, the more I realized the situation Zach and Nico were in couldn’t be resolved in the timeframe of Juggernaut. They needed developments that would only make sense to happen after the events of Strain. The plot also required Rhys to have matured a great deal since the end of Strain. Altogether, it gave me a beautiful opportunity to bring closure and an HEA ending (or at least as close to one as you get at the end of the world) for both sets of protagonists.

Thus we have Bane.

Over the course of the Bane blog tour, I’ll be sharing a free post-Bane short story, Refuge. How far post-Bane? Well, you’ll have to read and see. Some developments that happen in Bane are referenced, but not in any great detail, which means the reader should only encounter a few very broad, non-specific spoilers. Obviously, though, it will be best enjoyed if you’ve read Bane already (and Bane, of course, is best enjoyed after Juggernaut and Strain.)

Refuge introduces us to three new characters, Kal, Billie, and perhaps my favorite, Zeus. It’s a completely sex-free story, so you’re safe reading it at work. If my nebulous thoughts on how to continue the Strain universe ever take shape, it’s very possible a lot of material in this short story will be folded into a larger plot with Kal and Billie as the protagonists, and if that happens, you’ll find the smut there.

Each day, at least one stop on the blog tour will contain a section of the story. These segments may end or begin a little abruptly or clumsily at times, as I tried to split them in such a way that no one section would be to long and cumbersome for a single stop on the blog tour. In its linear form, it would simply be a five chapter story. By the end of the tour, all the sections will have been posted. If you need to catch up, you can check out the blog tour page (linked above), or my website, or the “Extras” tab on the Bane product page at Riptide for sequential links to all the posts.

Anyone who follows along on the tour will qualify to win store credit at Riptide. To enter the drawing, leave a comment on this post including a way to contact you (email, Twitter, or Facebook.) Each stop along the blog tour that you visit offers you another chance to enter. Be sure to check the Riptide blog tour schedule for a complete list of other stops. The contest will close 9/26/15. Any entries made without a way to contact the winner will be invalidated, so please don’t forget to provide your email, or your Twitter or Facebook address. 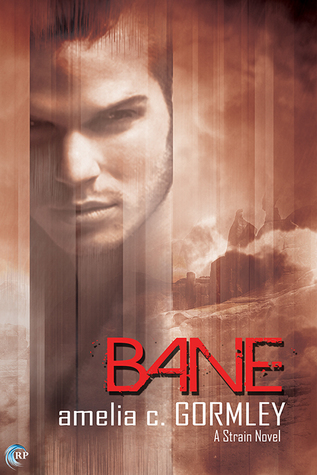 The weapon that nearly destroyed humanity may be their only salvation.

Rhys Cooper’s unique immunity to all three strains of the virus that nearly annihilated humanity has brought him the unwanted attention of Clean Zone scientists. They’ve summoned him for testing—ostensibly in the hopes of finding a vaccine—but Rhys’s partner, Darius Murrell, has good reason not to trust any government. He and his comrades in Delta Company were unwitting test subjects for Project Juggernaut, the military experiment that gave them superhuman abilities and unleashed the pandemic. Doubting the government’s intentions, Delta Company refuses to let Rhys go alone.

Fear of infection has kept Zach Houtman and his lover Nico Fernández apart for a decade. They meet rarely, just long enough to coordinate their spying on the head of the government’s virus research division. Secretary Littlewood is a vicious predator, and they suspect he’s trying to acquire the strain of the virus that would make him superhuman. To stop him, they need the perfect bait: Rhys.

For Rhys, helping them might cost him his relationship with Darius—or his life. For Zach and Nico, even if their plan succeeds, they still face the ultimate question: can infected and uninfected people ever live together safely?

Amelia C. Gormley published her first short story in the school newspaper in the 4thgrade, and since then has suffered the persistent delusion that enabling other people to hear the voices in her head might be a worthwhile endeavor. She’s even convinced her hapless spouse that it could be a lucrative one as well, especially when coupled with her real-life interest in angst, kink, social justice issues, and pretty men.

When her husband and son aren’t interacting with the back of her head as she stares at the computer, they rely on her to feed them, maintain their domicile, and keep some semblance of order in their lives (all very, very bad ideas—they really should know better by now.) She can also be found playing video games and ranting on Tumblr, seeing as how she’s one of those horrid social justice warriors out to destroy free speech, gaming, geek culture, and everything else that’s fun everywhere.

You can find her self-published Impulse trilogy almost anywhere ebooks are sold, and check out her catalog of Riptide Publishing releases at their website.

Kicking off the BANE Blog Tour! Check out the first few installments of REFUGE, a STRAIN-universe short! | The fiction of Amelia C. Gormley

Fantastic giveaway! A huge thank you to Amelia C. Gormley for stopping by On Top Down Under as part of the BANE blog tour.

I concur, Cindi 🙂
Oh, and I do love this series.

Congrats on the new release!
serena91291@gmail.com

I loved the story, every one of them are such great characters and i really apreciate the way the subject of discrimination was touch along the series.

Congrats on your new release! amaquilante(at)gmail(dot)com