Trading in my Pen for a Sword

In the event of an unexpected dragon assault, or if an angry hoard of goblins descends upon the city, I, for one, will be prepared. Get behind me—I’ve got this.

As a writer of fantasy, I am fortunate to not be besieged by the mountains of research that other authors are required to endure. While writing in a world of my own creation, there isn’t the danger of getting the history wrong, or misrepresenting the nuances of a particular culture. My research requirements tend to focus on smaller details—how a barrel is made, for example, or what plants are believed to help treat an infection.

These details bring color and authenticity to a novel, and are interesting to pursue…to a point. Conducting hard research is neither my wheelhouse nor my passion. Anything that requires a deeper investigation, my ADHD brain finds it daunting and tedious, and after too long it begins to have kicking tantrums on the floor until I scrap what I’m working on and go do something else. Research is a necessary evil, I know, but I’d rather be spending my time on a scene with my characters, not dredging pages and pages of resources for information on how someone skins a rabbit.

However, there was one type of research that I found both fruitful and inspiring. Combat.

I discovered, nearly by accident, the emerging trend of learning how to fight using medieval weapons. Gyms are popping up all over the country that train in the lost arts of martial combat from the Middle Ages and the Renaissance. For me, this took the form of a two-handed longsword, but there are a growing list of classes that involve other weapons as well.

The training is based on authentic source materials from the time. Over the last decade, there has been a great increase in the number of martial experts from all over the world that have gone back to these historic sources to learn how it was done. Through research of the text, training and practicing, and sharing ideas with other experts, much of the skills that had been considered lost have reemerged and are once again being taught to the masses. And more and more source materials are being discovered all the time. The more tactics these martial experts unearth, the more they discover that although there was some standardization in tactics, many sword masters at the time had their own personal styles that they taught to their men.

My training course employed the work of Fiore dei Liberi, an Italian weapons master of the 14th century. Although not much is known about him personally, he is one of the more widely known sources since he documented his style and technique with astounding detail. He used colorful names for offensive and defensive positions—boar’s tooth, full iron gate, and the woman’s guard to name a few—that were called out (in Italian) while we clumsily brandished our weapons. (I speak for myself, of course.)

The program turned out to be essential for my writing combat scenes. I gained more information through the physicality of wielding and swinging about a sword, following specific actions for defense or offense, than I could have by reading a manual. The movements feel like learning a dance in some respects. The weight of the weapon in your hand, how your muscles move and feel, and how the sword behaves as it is swung about—all of it adds up to a visceral experience that translate beautifully into authentic writing.

And aside from it being invaluable for my craft, the training was ridiculously fun. It wasn’t a raucous free-for-all, with everyone channeling their inner John Snow (for obvious safety reasons) but it was engaging and challenging in surprising ways. At my early rudimentary skill level, it wasn’t as physically demanding as one might expect—although I could envision that changing as skill improves. I felt some soreness in my muscles on days following my classes, but nothing drastic. Taking an introductory class shouldn’t intimidate anyone, regardless of their fitness level. It had a certain tai-chi essence—getting your body programed to take on various stances and moving with precision. When we were engaged in practiced combat, the movements are carefully choreographed. The training is cerebral. It requires a high level of concentration to negotiate your body—hands, arms, legs, shoulders—through a 3-dimensional space. It felt very Ralph Macchiao. Wax on, wax off.

Had it not been for my writing, I’m not sure I would have joined the class. I would have been intimidated by it, I think, thought it was for younger and tougher folk than me. But it’s quite literally for anyone with the interest and desire. In my class of twenty-some participants, every demographic was represented—young, old (me), men, women, fit, the not-so-fit (me again).

So, if you’ve ever swung a yard stick around quoting Inigo Montoya, I recommend you seek a gym that has the classes, get signed up, and start the adventure. You will thank me later. 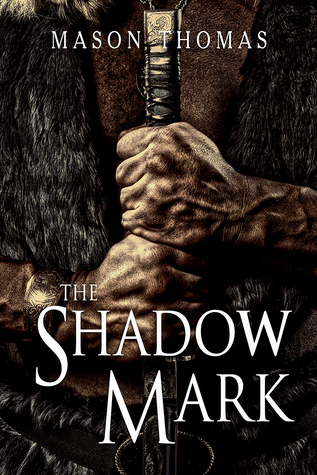 But the runes are far more significant than they realize. They are a message from the shadow realm, a dark memory of the past—one holding evidence of a bloody massacre and its savage architect; one that will shake the kingdom to its foundation. Risking arrest and execution, Auraq fights to get Kane to the capital city where the cryptic marking can be unlocked.  And with assassins close on their trail, Auraq might never get the chance to show Kane what’s in his heart—or the way their journey together has changed him.

Mason Thomas began his writing journey at the age of thirteen when his personal hero, Isaac Asimov, took the time to respond to a letter he wrote him. He’s been writing stories ever since. Today he is ecstatic and grateful that there is a place at the speculative table for stories with strong gay protagonists.

Mason, by all accounts, is still a nerdy teenager, although his hairline and waistline indicate otherwise. When his fingers are not pounding furiously at a keyboard, they can usually be found holding a video-game controller, plucking away at an electric guitar, or shaking a twenty-sided die during a role-playing game. Mason will take any opportunity to play dress-up, whether through cosplay, Halloween, or a visit to a Renaissance Faire. He pays the bills by daring middle school students to actually like school and encouraging them to make a mess in his science classroom. He lives in Chicago with his endlessly patient husband, who has tolerated his geeky nonsense for nearly two decades, and two unruly cats who graciously allow Mason and his husband to share the same space with them.