On Top Down Under would like to welcome Marek Moran, who stopped by with an excerpt from his new release, The Sparky, and to share some Australianisms. 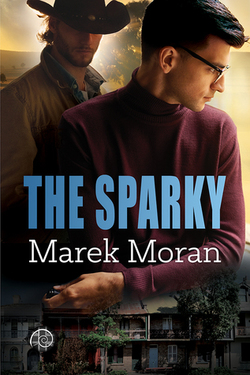 Aaron’s been living in what his friend Howie calls a sexual desert. But an oasis appears on the horizon when Paul, a divorced electrician with a five-year-old daughter named Sam, moves in next door. He’s a country boy from northern Australia, and although he’s never been with a guy before, he has an impression that anything goes in the city. They find that the ordinary things in life—books, footie in the park, looking after Sam—lead them into an unlikely relationship.

But as their relationship slowly deepens, with Aaron spending time on Paul’s family’s cattle station, it becomes clear that Paul might have a harder time leaving the country behind. To him, happiness means a conventional life—including a mother for Sam. Being with his old friends convinces him he’s on the wrong path with Aaron, and he starts a relationship with a girl from his hometown. If he cannot find the courage to go after what he truly needs, he and Aaron will become nothing more than awkward neighbours.

As I say in my bio, I really like listening to the way people talk, their accents or the things they say that strike me as unusual or funny because it’s different from what I’m used to. It’s most obvious when you learn another language, and some sayings just makes you laugh. For me, that happens in French: when I first came across the expressions la vache, j’ai un cafard (literally, “the cow, I have a cockroach”) to mean “man, I’m depressed”, or poser un lapin (literally, “to put a rabbit”) to mean “stand someone up [like for a date]”, I thought they were hilarious. (Still do.) Among just English speakers, there’s still a lot of interesting variation: I like the singsong of a Welsh accent, from watching a lot of Torchwood; the expression “bless his heart” from the US South is great; hearing Scottish people actually use “wee” in a sentence still entertains my inner child.

To be fair, of course, I know it goes the other way too. When I lived in the US, friends thought it was hysterical that I used the words “reckon” and “fortnight” in regular conversation, sounding to them as if I were being Shakespearean. And I know that one of our regular things in Australia that we do with words sounds funny to others: making new words, or shortening existing ones, by adding a -y or an -ie to them. So Chrissie is short for Christmas, tradie is short for tradesman, and sparky—from the book title—is what you’d call an electrician. One friend, on his first trip to Australia, took most of those in his stride, but one day was stumped: “I get all those other ones, but just what exactly are ‘pokies’?” (In case you’re wondering, it’s short for poker machines, what we call slot machines. That’s not what he was imagining.)

There’s some regional variation, although nothing as major as the differences in the US or the UK. Most Australians pronounce “dance” with an “a” as in “hat”; in Adelaide, it’s more “dahnce”. Sounds posh to the rest of us. One of these regional difference does feature in The Sparky in a small but important way.

Finally, there’s some other Australian vocabulary in The Sparky too. One of them’s the word “shirtlifter”, which we share with the Brits, as a name for a gay guy. It’s a bit negative, but not the worst. Hopefully they’re all apparent from context.

“So how do you know Paul?” asks the woman who appears to be with Dave, judging by the close body language. No wedding ring. I’ll think of her as Dave’s Girlfriend, DG.

“I live next door to him in Sydney,” I say. “I’d never been to this part of the country so he invited me up to visit.”

“Yeah, he always used to have people stay. You went shooting roos a few times, didn’t you, Dave?”

“No roos for me. I’m still working on hitting cans.”

“Sydney. Isn’t that where the shirtlifter went?” That’s the other guy. I look at him and try to guess his story. He looks like he might have been athletic once, but he’s not in good shape now, his neck and waist both thick, his pecs sagging; glancing over to see where Paul is, I note what good shape Paul’s kept himself in compared to a lot of people here. This guy here was probably good at sports; maybe got himself a job in the mines; married, I see from the ring; had everything looking rosy once; now, from his slightly glazed and sour look, I guess he’s sour about life. I’ll dub him the Jerk. Of course I don’t know if this is even slightly accurate, or fair, but I notice that the other three are frowning at him. I may have raised my eyebrows.

I wonder if the shirtlifter is a reference to Paul’s former brother-in-law, or whether there’s been more than one gay guy here of note.

Marek Moran is, in his day job, a computer science professor. If you want to know about shortest path graph algorithms, he’s your man. However, that’s probably not why you’re reading this. He currently lives in Sydney, Australia, and has previously lived in France, Germany and the US, enjoying travelling around and listening to people talk: he’s learnt to respond to enquiries after his wellbeing with a ça va merci, sehr gut danke or copacetic, thanks.

The only member of his book club to like George Eliot’s Mill on the Floss, he’s discovered that he enjoys writing romance as well as reading it; the other members of his book club don’t yet know this. He plays piano, squash, and his cards close to his chest. The Sparky is his first novel.

Southerners in the US use reckon too. Nice to see some Aussie words on a blog with Down Under in the title.

I was going to mention the reckon in the South too. I say it often. It is nice to see some Aussie-isms on here. I learned a few new ones though I have my very own Aussie interpreter. Wonder who that could be? 🙂 🙂 🙂 I also love the ‘bless your heart’ video with the definitions of the phrase. It’s all in how us southerners say it. And 99% of the time it does NOT actually mean ‘bless your heart’. lol

I love the phrase “bless your heart”, but I haven’t yet mastered it, not by a long way. I reckon it takes an entire childhood or equivalent time growing up.

And yes, very handy to have your own Aussie interpreter :-).

I guess because I lived in the Northeast US, I didn’t come across “reckon” there. Maybe my friends were laughing then because I sounded like some hybrid Shakespearean/southerner: “the play’s the thing/ wherein I’ll catch the conscience of the king, bless his heart”.

And yeah, your blog title was one of the things that made me decide on this as a topic :-).

Good choice for this blog 🙂