An Unexpected Truth by S.A. Meade

A trust destroyed is a trust that is hard to recover…

Brendan Matthews is happy training racehorses for a living. He thinks he’s hit the jackpot when a wealthy orthopaedic surgeon, Adam Ahmadi, sends six yearlings his way. Not only are the horses a cut above the rest, their owner isn’t too shabby either.

But not everything is as it seems. Adam has many secrets, most of them dark and deadly. When Adam’s past returns with a vengeance, he disappears, leaving Brendan confused and hurt.

If Adam survives, will his past destroy their future?

This book is a hard one to review because to talk about Adam is to spoil a bit of the plot of this book. So here goes nothing.

Adam Ahmadi has bought six yearlings that a bloodstock agent has advised he give to Brendan Matthews to train at Newmarket. 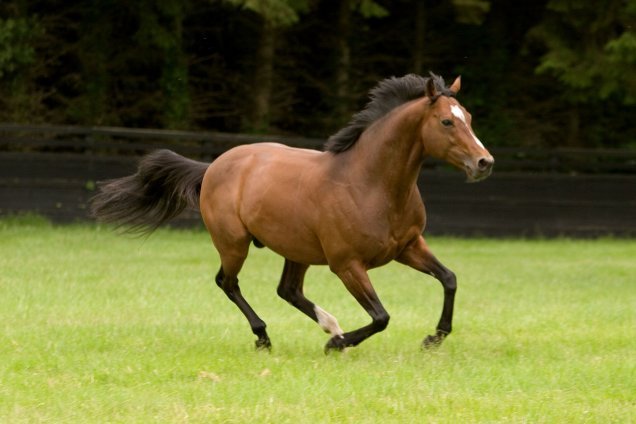 Adam is a sophisticated, handsome forty-ish bi man from a Jordanian family who lives in London. He is retired after an accident cut his career short. Once Brendan and Adam meet there is an attraction. Brendan is a gay man leading a quiet life training horses and hanging out a fair bit with fellow trainer and next door neighbour, Grace. Her husband, Chris, has PTSD from a tour in Afghanistan so they lead a pretty sedate life as well but even they do more than Brendan. Grace has a broken (horse) walker and they help each other out with facilities. Grace has also well and truly taken Brendan under her wing. He calls her the sister he never had.

A fair bit of the time in this book is spent around the kitchen of Brendan’s house. And food. The timeframe of An Unexpected Truth spans multiple seasons and the food alternates to accommodate the wind and the rain and the snow or the warmer temperatures. There is a genuine comfort I derived from the food and the time spent near the oven or drinking a nice cup of coffee. It’s the little things like this that can make you feel cosy or can seem familiar. The weather could be so bleak and cold sounding to this Aussie – I don’t like the cold – but the imagery was lovely and I wanted to go to Newmarket and be with the horses during their training on the heath. It is so different to Australia.

Once Brendan and Adam meet their relationship hits the ground running – much like an early two year old – even without them knowing a whole lot about one another. Brendan is initially concerned about becoming involved with a client because it could end with the loss of business, but those thoughts disappear fairly quickly when Adam makes it known he finds Brendan equally attractive. Pretty soon they fall into bed and a routine of time spent at Brendan’s home. A domestic familiarity and bliss makes both men happy until Adam up and disappears on Brendan. Nothing is said to Brendan at all. The reader discovers that Adam has gone to America, but Brendan knows nothing and is so worried he calls the police. Obviously this is not the most ideal situation to have happen. However, when Adam comes back and explains his sudden disappearance to Brendan he feels he understands why Adam did it – they haven’t known each other that long, Adam has a right to privacy if that makes him more comfortable. I have to admit it ticked me off somewhat but if Brendan was cool with it then I decided to roll with it as well.

Adam is also in an arranged marriage, and while not divorced, he and his wife, Nina, have been separated for some time. She has a partner too, and all seems more than amicable between them. They even share a Christmas together with their respective partners, and Grace and Chris are also in the mix. There are a few things that are… unusual which occur in the beginning stages of their relationship. Adam has piecemeal nightmares about his accident. His marriage to Nina. His disappearance. In contrast, Brendan is a very uncomplicated and laidback person, he doesn’t get uncontrollably upset or mad. When he feels in over his head, when events seemingly out of his hands occur, he works his horses, likes a peaceful drink, he cooks, and Grace is always sensible company, giving good advice without being judgemental.

Apart from the running of a stable, the day to day activities of life at Brendan’s home, a burgeoning relationship, 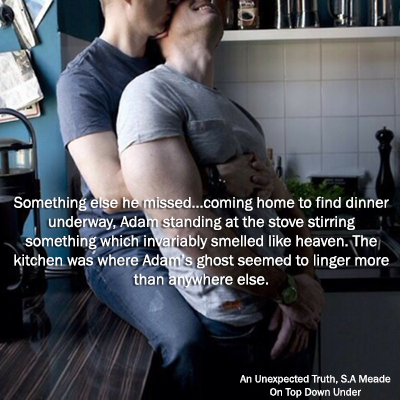 there is a mystery/suspense component to this book. I like both in my books and An Unexpected Truth delivers well. The title is perfect for the story. Several months later, Adam disappears again, but this time he sends a letter to Brendan. The letter says nothing, other than letting Brendan know Adam is alive and that he cares for Brendan. Because you get both POV the reader is aware of events as they unfold for Adam and how Brendan is feeling about another disappearance by him. How hurt he is and how much he misses Adam after having him in his life, his house and bed for many months. The different POV help you stay connected and somewhat sympathetic to Adam. Brendan is such a likeable MC you could easily be unforgiving towards Adam without knowing what was going on.

I guess there isn’t much more I can share without spoilers, but the second half, approximately, changes up the shape of Brendan and Adam’s relationship as more secrets and intrigue appear. I was also pleasantly surprised by unexpected events.

I liked the MCs, they drew me in in their own way, and the secondary characters added interest – Grace is a straightshooter and a good friend. Horses are always a bonus for me.

I picked up this book because I know racing and breeding. It’s an interest of mine because I’ve both bred and raced 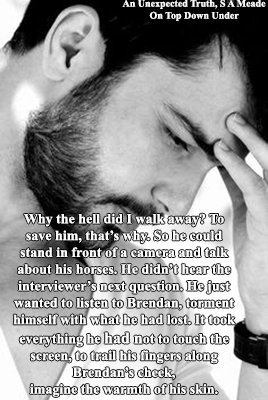 numerous thoroughbreds. Attended many yearling sales. Given what I know about Adam, I found it unbelievable that he could have afforded six yearlings, let alone the ongoing training and associated racing costs. Apart from the initial outlay for these yearlings, which would have been considerable, there are trainers fees, standard vet expenses, farriers, trial fees, special feed, race entry, the breakers, racing silks/colours, spelling, registering names, sometimes chiropractic/massage treatment, sometimes surgery, the list goes on. Racing is not called the sport of kings for nothing. Unless you are a very wealthy person in England you need a syndicate, in Australia it’s pretty much the same now. One of the yearlings in this story is a Galileo, he underperformed in the Southern Hemisphere as a sire but in the Northern Hemisphere it’s vastly different. He is an expensive stallion, his yearlings pricey and keenly sought out. A Lemon Drop Kid yearling as well. That’s a fair bit of dosh for just that pair – let alone the others – even before the racing begins. If he had come to the stable with two yearlings it would have been far more plausible, only two get a mention anyway, Kawkab and Lemon Rose, so why not leave it at the more believable two yearlings?

One more thing, this book is very British, to the point where differences between England and America are pointed out on a couple of occasions, yet the spelling doesn’t match up. The word arse is British English and was right but centre is spelled center and colour as color, with cosy spelled as cozy. Why Americanise any words? If the book is set in England keep it British English in all ways. It’s a real pet peeve of mine. Other readers may not be so concerned. The English issue I have is because I’m an Aussie and British English is my English as well. The racing niggle is because I know racing and breeding so intimately. These two issues in an otherwise really enjoyable book are why I’ve rated it 4 stars instead of 5.

No. The pull of England was too great. He craved the cozy familiarity of marmalade with his toast, rainy summer evenings and twilights that went on forever. He missed crumpets and decent tea. He missed cheeky butchers and the BBC news.

I thoroughly enjoyed this book, I liked Brendan a great deal, I thought his temperament and demeanour so nice. He’s gentle and forgiving but not a pushover. Adam wasn’t a flighty man but he did leave on two occasions, one for perfectly understandable reasons and without much say. He made good on how things went pear shaped and he was a good match for Brendan. He loved him. I liked that the MCs are a little older than some I’ve been reading lately, you know that Adam is approximately forty, maybe plus a year or two, and Brendan’s age isn’t mentioned but I assumed it was early thirties. Grace was a good secondary character, as was her husband, Chris. There is a rescue Jack Russell, Tag, a breed I love a great deal as several of them have owned me over the years, including now. The romance was quiet for the most part, it isn’t overly steamy, but they still made love on several occasions and it felt authentic. The setting was British and the characters fit. The descriptions of cooking and food and the weather, and how each man felt in relation to them, as well as how they felt about one another, was charming. There could have been more about the racing for this enthusiast, but that’s okay as there was just enough. The suspense elements were intriguingly written and had me invested. I have never read S.A Meade before but this was a delightful introduction and it won’t be my last. 4 Stars!

Previous post
In The Hatred of a Minute, AD Tonsi
Next post
Book Tour : The Layover Roe Horvat

I was reading about Adam thinking that I wouldn’t be too keen on him because he kept disappearing. I’m curious to know more. I can relate to a lot happening in the kitchen. We southerners spend a lot of time in the kitchen around the dinner table. It can be doing homework, discussing things, or, you know, eating. 🙂 I smiled when I read that part. I know very little about horse racing or breeding but that was interesting too. Great review, Kazza. This looks like a really good story. Mixing the British and American spelling would’ve been a niggle… Read more »

The first time Adam did go I was not happy with him but sometimes people are so used to being independent and Brendan was all good, so…

There’s a great deal of comfort to be found around food and the fact that people are often associated with it. The smell of it as well can evoke powerful memories of a time, a place, a person.

Family eating at the dining table and talking is one of the best activities and, sadly, not many do it anymore.