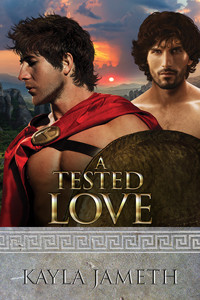 Andreas’ heart pounded. Time was running out. If he didn’t find Theron quickly, he would be too late. Somewhere out there his warrior lay injured and dying.

Fearing what he might find, Andreas roamed his klēros, searching his barren holding for his missing lover. His fields stretched as far as the eye could see, blackened stubble growing hazy in the remote distance. No matter how long he walked, he couldn’t find Theron.

He tasted ashes, bitter as blood, on his tongue. Gray smudges covered his once white chiton and discolored his skin. Andreas would never be free of the stain.

Sometimes he thought he’d been wandering forever. Racing against inflexible Atropos, the daughter of night, Andreas was driven to find the kryptes before she cut Theron’s thread short with her abhorred shears.

Night was coming, that time all helots feared—something terrible fast on its heels, death in its wake. Doom now stalked them both, flashes of scarlet in the growing gloom.

He’d never stood beneath any sky without the sun to protect him, protect him from the kryptes and any other monsters roaming the lightless night.

Soon. He had to find Theron soon!

But he was frozen in place, unable to move no matter how he struggled….

Andreas sat up with a shout. He whirled, eyes searching frantically for the red-clad peril pursuing him. His breath came in choppy gasps barely audible above the thunder of blood in his ears.

The stink of soot and fear clogged his nostrils. He took a moment to recognize his surroundings in the almost nonexistent light coming from his hearth. The fire had burned down to little more than a flicker.

Untangling himself from the sodden blanket, Andreas shivered, sweat prickling his skin. He scurried to the hearth. Scrabbling for small bits of wood to add to the fire before he lost any hope of rekindling the embers, he drove a splinter under his nail. “Hades!” But he didn’t examine his finger until the scraps of kindling began to smolder. If the flame went out, he’d have to go to Petros tomorrow and beg a coal from his hearth.

He plucked the sliver free with his teeth and spat it out on the floor. Sucking on the wound, Andreas kept watch as the fire took hold. The mix of coppery blood and wood smoke drew his nightmare back from the shadows.

But unlike in his dream, while awake he didn’t fear the darkness within. The dark without held all the danger for him. Like every helot before him, he’d been taught as a child to fear the kryptes who roamed the night, slaying all helots they happened upon. A helot’s only hope lay within the walls of his home once night fell.

Unfortunately nowhere was safe for any helot who the Spartans determined must die.

The sole requirement a kryptes had to meet in delivering their fate was to remain unseen by anyone other than their victim. Their ability to come and go undetected was part of their mystique, part of what made them so terrifying.

The flames blazed up, filling the single-room hut with light. Andreas sank down to the floor, at first unsure what had brought on the nightmare when he’d gone a month or more since the last one. All those thoughts and feelings he’d refused to give life had come boiling up.

Much too late now, the dream should no longer have the strength to haunt him. Theron was long past his help.

Andreas hadn’t seen the Hekate-becursed man since he disappeared months ago.

How many nights had he sat up worrying about the bastard? How many times had he endured that nightmare? He’d woken with a shout, covered in sweat, too many times to count. And what had he gotten for all his lost sleep? Not a cursed thing.

With his endless searching, Andreas had come to know his lands better than he’d thought possible, but the warrior eluded him, whether in life or in death, he didn’t know.

Andreas chose to believe Theron yet lived. But it was long past time for his fate to matter. Theron should have returned by now if he were still alive. Either his “lover”—Andreas snorted in disgust—had died without him, or more likely he’d left Andreas behind without a second thought. If Theron was alive after all this time, he had no intention of returning. Either way Andreas would never see him again.

Once Andreas realized this, he submerged his grief as best he could. In an effort to avoid his nightmares, he’d worked himself harder than he ever had before. He spent his days tilling his fields like a madman, channeling his frustration into the uncomplaining soil until he was too tired to think of anything while he lay in his bed. Or nursing the wine Myron gave him in exchange for helping expand his vineyard. And his plan had worked, mostly.

Staring into the blaze, Andreas wondered what had driven Theron from him and kept him away. He’d left once, soon after they’d met, but Andreas thought they’d resolved Theron’s concerns about being exposed. Theron had even proposed a solution to the problem of their being together, offering to claim him as his mothônes, his companion.

Theron must have changed his mind.

Reaching for the wineskin hanging from the head of his bed, Andreas was surprised to find it missing. Glancing around the room, he discovered the half-empty skin where he must have left it on the table when he had stumbled to bed. He needed to refill the flask in the morning.

Without wasting time finding a cup, he drank straight from the wineskin. But the familiar warmth didn’t lull him back to sleep this time.

Andreas rose and paced the short distance between the hearth and his bed. The quick temper he’d inherited from his father came spilling out like one of the plagues from Pandora’s jar. He’d thought he’d stamped the last embers of that smoldering resentment out, but maybe he’d never cared about anything deeply enough to have his belief tested. He punched the mattress a fevered Theron had lain on.

Yet another way he would have disappointed his mother had she been here to see him.

For a while after his father died, Andreas had been every bit as angry as his father before him. Father had spoken out against the annual “war” the Spartans had waged on the helots, so when Andreas had railed on about his father’s death, his mother had grown fearful.

“You’re too much like your father! And what did his anger gain him? Is it not enough I have lost a husband? I will not lose my only child as well!”

Even the tears spilling down her cheeks couldn’t keep him from insisting, “But killing someone just because you can is wrong. What did Father do to deserve death?”

“Never forget we’re what the gods made us—slaves. That is our lot in life, Andreas. What we were born for. We are not, and will never be, their equals. The Spartans can do whatever they want to us. A slave’s duty is to endure. Anything else is rebellion and results in many more deaths. Do you want to be responsible for bringing destruction down on us?”

“The Spartans are very careful to avoid murder. They declare war on us instead.”

“Ah… Andreas, my heart, the gods agree with them.” Then as if to forestall him, she pulled him into her arms. “It’s hubris to think you know better than the gods.”

Hubris. That ultimate of all sins. There was no answer he could make to that.

Andreas had learned to force the anger down, hiding his feelings under obedience and hard work. And the mask had served him well, until the day a thieving kryptes arrived to set his world and his hard-won composure on its ear.

Now the anger and resentment worked their way to the surface like the fires in Hephaestus’ volcanic forge, ready to spew molten fury and rain down disaster on anyone who crossed him. If Theron were here now, Andreas would be tempted to do more than just yell at the kryptes like he had in the past.

“Foresworn godless bastard! He said he’d stand by me and protect me, but where is he now?” Andreas spat. “Oaths to a helot obviously mean nothing to a kryptes. Pretty little promises to get me to do as he wished.”

As he stomped back toward the fire, Ictis darted under the table to escape his feet.

“Couldn’t even be bothered to let me know.” Another turn back to the bed. “The coward said he’d be back and then disappeared, walked off and left me, letting me think he’d died.”

Once more at the hearth, Andreas glanced down at his gods and picked up the figurine of Apollo. “I can’t believe I asked the Lord of Light to watch over a kryptes, of all people!”

Andreas clenched the clay god tight. The terracotta form dug into his palm, Apollo’s bow pricking the skin. He stared at his fist. After a moment’s hesitation, he carefully returned the likeness to his hearth before he did something unforgivable, like crush it. He didn’t dare incur Apollo’s enmity.

“Still allowing that sneaking murderer to control me. Honorless warrior!”

The fire snapped, and a handful of embers cascaded to the dirt floor. One landed on his knee, flaring amid the scent of burned hair before he hurriedly brushed the cinder away. The small red patch stung and throbbed in reproach.

No longer hiding under the table, the ferret’s black bead eyes regarded him from atop one of the stools. Andreas pursed his lips, trying to expel all the bitterness in his mouth. “What was I thinking, Ictis? Theron would come and take me away with him?”

On the next swing, he flung himself down on his bed. “I’m a fool, aren’t I? To believe there can be anything from a kryptes other than a knife in the back.” He lay there, his harsh breaths slowing. Too angry to sleep.

Ictis pounced on him. “I know you like him. I used to like him. But that lying kryptes didn’t abandon you to your fate after placing you in danger.”

Great post and love the blurb for this one!

Thank you! I’m glad it tickles your fancy.

Thank you so much for the opportunity! The book looks amazing, I will be adding it to my TBR list 🙂

Thank you. If you haven’t already read it, you will want to read A Spartan Love first. It tells the tale of how Andreas and Theron met.