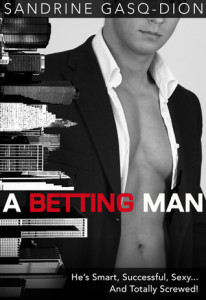 Kent Samson is a high-powered advertising executive in New York. He’s got it all:  the high salaried job, the expensive apartment, more money than he can ever use and his choice of gorgeous women in his bed. Originally from a small Alabama town, Kent has shed the southern accent and everything pertaining to his old life… including the parents that he hasn’t been to visit in five years.  There is still contact but no visits to the town that he could not get away from fast enough.

Terry Barron is a bicycle messenger in New York. Originally from a wealthy family in England, he took off when his parents could not accept his homosexuality and began parading eligible women in his face at every opportunity.  He has created a new, simple life and never wants to go back to his old one.  Terrance became Terry.  He uses the wages from his messenger job to get by, never touching the family money, and he’s happy as a result.

Kent and his business partner, Blaine, have a bet.  Blaine bets Kent that he can not make the next person who walks in the office fall in love with him.   He has to date the person (male or female), make the person fall in love within six months and then he will have won the bet.  The last time Kent didn’t take one of Blaine’s bets he ended up in jail for the night so he figures what the hell?  How hard can it be?  Kent has the looks of David Beckham, a lot of money and a great body.  It will be a cinch, right?  Unfortunately, Kent isn’t expecting the next person to walk in to be a male bicycle messenger.  A hot bicycle messenger.  The only experience Kent has had with a man to this point is playing silly college games with Blaine years ago so he must pull out all the stops to pretend to show interest in the messenger who turns out to be Terry. A quick date leads to another and real feelings become involved… with both men.  Unfortunately the bet is still hanging over Kent’s head and Terry has yet to come clean about who he really is.  All of this comes to a head toward the end when all is revealed in a dramatic way.

Parts of this story I enjoyed, parts not.  The relationship between Kent and Terry is based on deception on both parts.  I knew this going in so I was able to overlook that.  Kent is just not a good guy until long into the book.  He is ashamed of his roots, his family, his upbringing.  That bothered me.  Terry running away from his family is understandable but not his deception with Kent.  During one specific part of the story, Kent and Terry take a trip to Alabama to meet Kent’s parents for reasons that are mentioned in the book.  All who know me know that southern-speak is one of my major pet peeves in books and the entire visit is filled with it and not necessarily in a cute way. I live in Mobile, Alabama… born and raised.  Most who follow this blog and my reviews know this.  So to see Alabamians written where they come across as silly and uneducated bothers me in a big way.  Not one sentence of silly southernism dialogue was necessary in my opinion.  Throw in an occasional y’all or something along those lines if you feel the need to, but don’t throw in ridiculous sentences that even I, a true southerner, almost needed help in interpreting.  This literally dropped my rating of this book by a star.

There are a few things that I did like.  I absolutely adored Kent’s parents.  Unlike most books set partially in the south, these parents are not homophobic and accept their son and Terry as a couple.  They were fun to read about if one can overlook the dialogue. I enjoyed Spencer, Terry’s boss, and Kent’s executive assistant Anna.  I also love that the book is told in alternating points of view with Kent and Terry alternating chapters.

Overall, a nice story.  It takes a bit for Kent and Terry to get their happily-ever-after but they do find it with a little help from friends and both sets of parents.  The ending was written very well and not rushed.  Aside from what I mentioned above, an enjoyable read.  Two of the secondary characters had instant chemistry.  I hope to read their story some day.