We Need Him, Part 1, Sage Mattison 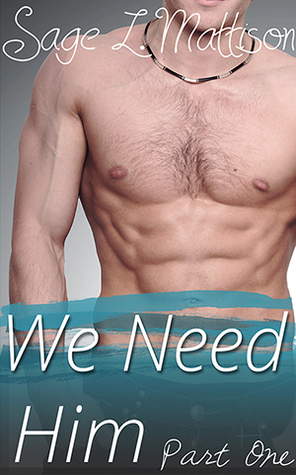 Jake and Jamie realize their relationship of five years is starting to fall apart, will they continue to pull away from each other or mend the rift? Jamie wonders how she can be enough for her boyfriend, who has always liked both men and women, while Jake ignores the problem. When they meet Brett The Britt through a mutual friend, will their attraction break or mend the relationship? We Need Him is series of novellas that follow Jake, Jamie and Brett as they meet and get to know each other. This series is an erotic romance with male-male-female ménage and very descriptive sexual encounters. This book is intended for audiences over the age of 18 due to explicit material.

Jamie and Jake have been a couple for about five years and have lived together for two. Their sex life has always been hot and neither had any complaints in the bedroom. All this changes around the fifth year into their relationship. Oh, they still love each other, but they start doing more of their own things and begin drifting apart. Jamie reads her romance novels in the bedroom while Jake plays his video games in the other room. Both know something is missing from their relationship, but neither is sure exactly what that is.

Jamie has always known that Jake was bisexual, but he’s been faithful to her for all the years they’ve been together. Jamie has fantasized about seeing Jake with another man, but has never said anything. Things start getting really bad between the couple when Jake doesn’t notice her sexy clothes and even sleeps on the sofa so he won’t ‘wake her’ when he comes to bed. Things change at a party given by one of Jake’s coworkers, Sam. This is where they meet the Brit.

Brett the Brit  is in the United States revamping his uncle’s hotel. An old friend of Sam’s, he is at the party and makes it clear that he’s not only interested in Jamie, but he wants Jake as well. He doesn’t openly hit on either one, but he gives them each a look that lets them know he would be open to being with both. This gives Jamie an idea and she gets with Jake about it in the bathroom of Sam’s home. This involved getting on her knees for her man and there was a pretty hot blowjob going on. Jake is all over the idea of being with Brett and it’s decided that Jamie will approach the other man and see if he’s interested. Oh, he’s very interested. *grin* This leads to Brett going home with Jamie and Jake and a pretty intense evening of hot-as-hell sex. Brett ends up spending the night and Jamie and Jake wake up feeling better about their relationship than they have in a long time. But what happens when Brett wakes up and faces the day? You’ll have to read the story to find out.

This is a sexy story. I wasn’t overly enthused with either Jamie or Jake, but I could (in a sense) get their relationship and the rut they fell into. I liked Brett for the most part. I could see me really liking his character with a bit more page time.

So, why the 3 stars? The editing. I’ll be the first to overlook an editing issue here and there – a misspelling or typo? No problem. In We Need Him, they were distracting because they were so frequent. While I hate being that girl and pointing out every little editing mistake in a story (I’m not doing that here), I had a very difficult time reading this one because I was constantly being distracted by the POV shifts (from 3rd to 1st mid-sentence) and other editing problems. There were also a couple of inconsistencies, but they didn’t take away from the story. Doubtful others will even notice them.

Overall, the story is good if you can overlook the other things I mentioned. The sex is pretty hot (though there’s a lack of prep for the man on man sex) and I can see this being a good ménage series with a bit of tightening up. It’s not often I read ménage stories with a woman in the middle. I found this one to be entertaining.

I like some bi action, I’ve read a couple lately myself. This sounds interesting, but I would have noticed the changing POV and been distracted as well.

Thanks. I know you like bi stories. 🙂 Other than the editing issues mentioned in my review, it was a nice, sexy short.

Another honest review!! That’s why I love this blog!
Ok, so I do like the sound of this one and will definitely be checking it out.
Judes