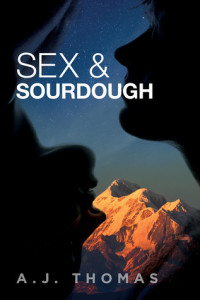 For six months Anders Blankenship has been planning to hike the Appalachian Trail with his boyfriend Joel. He rushed though his final exams, bought everything he and Joel would need for the summer on the trails and made the decision to miss his commencement ceremony as it would take place when they are hiking. Only Joel cancels at the last minute and expects Anders to do the same.  Anders decides he’s going anyway. This doesn’t go well for the abusive Joel as he feels that Anders should stay home with him while he does a summer class (that he signed up for knowing the trip was in the works and all the planning that had gone into it). The planning – everything – was Joel’s idea but yet he’s the one who cancelled at the last minute so why should Anders? The only problem? Anders knows very little about hiking.

Anders lives in Jacksonville, Florida and his life has been planned out for him by his father since the day he was born. It is not only expected but understood that he will be attending law school when it begins in the Fall. He just graduated from business school and law school is the next step. What Anders wants doesn’t matter. Not only does his father have his professional life planned, he also has plans for his personal life, never accepting that his son – who came out at sixteen – is gay.

He knew his father had been waiting for them to break up, waiting for Anders to get being gay out of his system, so he could set Anders up with the daughter of one of his partners. So long as he was in a relationship, he had a shield against the endless hints that he just hadn’t found the right girl yet. Anders had known he was gay since he was ten, but his father had always treated his homosexuality like it was just some juvenile rebellion, something to be ignored, like a teenage temper tantrum he would grow out of eventually.

Four hundred miles from home at the Amicalola Falls Visitor Center Anders is replaying the many angry voice mails from Joel. He signs in at the ranger station and is kind of at a loss. Does he go on with the planned hike or give in yet again to Joel? A stranger makes the decision for him when he encourages him to keep going. That stranger is Kevin.

Joel was always the first person to point out that Anders would be nothing without him, and when they were together, Anders believed him.

Kevin Winters lives his life on the trails. He’s unemployed, homeless and his whole world consists of hiking. He is also very ill with the same illness that killed his father a few years earlier. When he meets the green Anders Blankenship at the Visitor Center he decides to help the guy out a bit. Along the way they become friends in a sense. Both are gay but Anders is planning to meet up with Joel in a couple of days and hopefully have his boyfriend with him during the rest of the long hike. This wouldn’t matter anyway as Kevin goes to great lengths to keep people at an arms distance. He is convinced that he’s dying and will not take a chance of getting close only to have to push someone away when the illness takes its toll on his body. Only those plans completely fly out the window when Anders meets Joel at the designated place and it goes as expected for the reader. Joel has no intention of doing anything other than taking Anders back home to Jacksonville. His plans are more important, remember? There is a bad break-up scene and Joel is left in the parking lot. Kevin takes pity on Anders and their hiking together continues.

Along the way the reader learns more about Kevin’s illness. He abandoned his mother and sister (and their family business) when he discovered that he was suffering with the same disease of his father. He has basically cut all ties and lives his life trying to manage his illness and walking the trails. When he meets Anders he is thrown for a loop. He is attracted and wants him almost instantly but he knows that keeping a distance is best for all involved. He was given a possible death sentence and the last thing he wants to be is the rebound guy. Only that doesn’t quite go as planned when they get together one night. That one night turns into almost every one until Anders has to go back to Jacksonville to his real life.

Joel hasn’t given up, however. He leaves so many voice mails on Anders’ phone that he can’t keep up, even deleting them as fast as he is able to get a phone signal to hear them. When the calls are left unanswered and messages not returned, Joel takes it one step further when he starts showing up at places along the trail. He lies to Anders’ parents and gets them more worried than is warranted. Joel is slowly losing it but Kevin, along with others on the trail, do all they can to keep Joel from getting anywhere near Anders.

Eventually it’s time for Anders to go back to his real life. There is a goodbye scene with Kevin that almost broke my heart. Neither man planned to fall in love but it happened anyway, though they keep that to themselves.

When Anders arrives home it is as expected. He goes to classes that he hates and misses Kevin more each day. But Kevin is a drifter with no contact information and he made it pretty clear that when they parted, that would be the end. When there is a violent scene with Joel in Jacksonville, Anders finally stands up to him and his parents and makes a move to start living his live the way he wants – not the way others dictate.  But he has to find Kevin first. The very elusive Kevin.

“You drove all this way from Massachusetts, in one shot, looking for him?”

“Yeah. I’m not quite sure where I’d be if I hadn’t met Kevin,” Anders admitted.

He smiled himself, wondering how he had changed so much after one walk in the woods. “I owe him a lot.”

Kevin is eventually found and things start to move right along until there are serious issues with Joel. Kevin’s absent family is also introduced though I wish more would have been elaborated on in that regard. There are several secondary characters who are critical to the story. From the many hikers Kevin and Anders meet along the way (Chex Mix, Spider, Bumblebee, Doc, Caboose, etc.) to Anders’ family. Anders’ brothers are something else, to put it mildly. They don’t exactly embrace their baby brother and one is especially harsh. The author opened the door to a sequel for this particular brother and I hope to see his story in the future. I wasn’t sure what to make of his parents. One minute I kind of liked them but other times I didn’t.

The title is very fitting as Sourdough is Kevin’s name on the trail. He has an obsession with sourdough bread and somehow finds a way to make it during his hiking and camping. Sourdough bread reminds him of the home he left behind and the bakery his family owns. It reminds him of growing up next to his late father as he ran the bakery and just the smell takes him back to the days before his world completely fell apart.

I enjoyed watching Anders and Kevin as they made their way toward their happily-ever-after. I like that Anders lives in Jacksonville, Florida as I have spent a lot of time there in the past. Two of the hikers are from Pensacola, Florida, and I found that to be nice as well. While I don’t live in Florida, Pensacola is considered “local” where I am as it’s only a couple of hours away.

There are a few things, however, that gave me pause. A couple of times I had to go back and reread certain pages to get over a bit of confusion. This could have been that I read something wrong so it may not even be an issue. Also, something seriously dramatic occurs close to the end of the book and while I expected something of this nature to happen, I expected more to be revealed in regards to it. I can’t say more about that without giving away a huge part of the book. Also, while I enjoyed the information in regards to baking bread, I admit to finding it a little tiring as it is described in detail on many occasions. This did not take away from the story but it did get to be a bit much at times.

Overall, I enjoyed Sex & Sourdough. The story is good and the characters are all very entertaining. I look forward to reading more by A.J. Thomas.

This sounds pretty interesting. You did not give a thing away and your review makes a pretty appealing case for reading it 🙂 I like sourdough!

Thanks! It was a nice story and I admit to craving sourdough bread while reading it. 😀