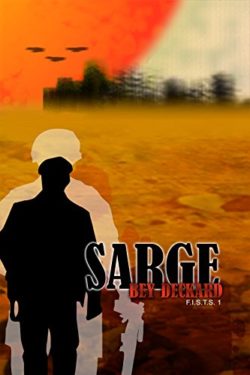 Sometimes it’s just about being in the right place at the right time… with the right person.

Sarge is the short story of a burgeoning D/s relationship between two space marines stationed on an alien planet where an endless war drags on.

Sergeant Wilkes is a hard man with a long, celebrated military career.
Brawny, tattooed, and utterly submissive, Murphy is just an interesting diversion… until Sarge realises he has found something truly rare.

I had this book recommended to me by a friend on Goodreads after I read Better the Devil You Know. They are completely different books but the rec was a good one. Anyway, short review incoming.

With the next one already published I know I want to read this. I’ve not read a good erotica book in a very long time. This looks like it has everything I’d want and sexy as hell. I love (love!) your visuals and quotes. And Murphy’s 6’8″.. wow. 😀 I do love tall men, as you know well. *snort*

You like tall men? I find that hard to believe – ha ha!
It’s good when you enjoy a book and you have the next one to dive straight into. I read them pretty much together. You’d like Sarge and Murphy, Cindi. Good erotic(a) reading with a strong story as well. 🙂