Safe in His Arms, Renae Kaye 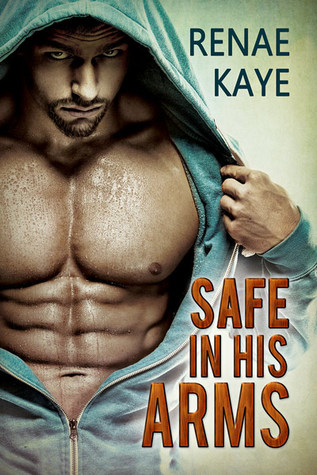 In the late-night quiet of the caravan park shower room, Lon Taylor washes away the filth of the Western Australian mines. He’s not looking for anyone, but when Casey offers, Lon doesn’t turn him down.

Welcoming the young man in his big, hairy arms, Lon provides a safety to Casey that he has never known, and Casey wants to stay forever. Still reeling from the breakup of his family years ago, Lon’s not sure he’s ready for the responsibility of the comfort and security Casey craves.

But perhaps Lon can risk opening his heart again and hoping for a brighter future. Casey has some pretty big skeletons in his past to deal with. And Lon wonders what Casey will do when he finds out how badly Lon failed at protecting the ones he loved eight years ago.

I actually bought this book for a couple of reasons. 1) I don’t have a great love affair with Aussie romance authors and I’d like that to change, you know, given I’m an Aussie and all, and 2) It sounded a bit darker than the author’s other books. And to be very honest, while I have periods of enjoying lighter, sweeter books, I prefer darker reading. For all that the cover looks brooding and the blurb sounds like it could be dark, this is a lighter read.

Lon meets Casey in his caravan park’s public showers when he is back in Perth after his latest work shift. When he sees the young guy staring he asks the guy to stop gawking and take off or he can give him a blowjob.  Casey takes the second option. Casey doesn’t recognise Lon and Lon doesn’t recognise Casey, which is unusual at a caravan park. However, it’s because Lon is a FIFO worker at the mines up in Newman, Western Australia. He has  pretty standard shifts of a couple weeks on a couple off, a month on a month off. Casey is now living with his grandmother at the caravan park and has  come over from Sydney to escape his sad and painful past.

Casey (actually nineteen turning twenty) assures Lon he is legal, tells him he’s twenty two. Lon is thirty three and wanted to be sure. I liked the age variance, always a sucker for it. Interestingly, I found that when Casey was young he was very young, but on other occasions I found him to be more mature than Lon – about counselling, about being okay with being gay and wanting sex.  Irrespective of the blurb, I never found Casey to be needy, if anything I found it to be a little in reverse. His friends, Devon and Ash, are pretty interesting and I really liked them. Lon’s friend Paul, for me, was not terribly likeable and too rough around the edges. Although the author worked hard on making him seem a flawed but likeable guy Paul and I didn’t gel.

There is a lot going on in this book and it is one of the reasons that it didn’t work as well for me . In the MCs backstories there are family members missing, dead, rapist paedophiles, a cyclone, therapy, friend’s issues. It took over at the expense of a fully realised relationship. I had moments of loving the characters but more moments of not being engaged enough by them… and I still don’t know what Lon did in the mines. I also found because there were so many things, the heat was missing and the chemistry didn’t fire all the time – it cut in and out. The other issue I had was the total and utter lack of communication – I know that Aussies, Aussie men in particular, are not the loquacious types when it comes to feelings, but this was a total shutdown. Interestingly, Mick the counsellor asked Casey a few basic questions about Lon and he didn’t know the answers. Things that are very standard like what Lon’s specific job was, as one example  – and this was at around the 70% mark. Not hard things to know about a guy you’re dating. In order to have love you need to know more than a partner is a sexy bear who has a huge cock, and Lon did – big man, big cock.  That cock didn’t get to walk the walk as much as I would have liked either.

The characters are Aussie and I was glad that Ms Kaye wrote them that way. The descriptions of Perth and of Newman were spot-on and I liked seeing them on page. The lingo/ vernacular was quintessentially ocker and that held very true for the characters portrayed – they’re ockers with a fair touch of bogan as well. The biggest issue for me is that I don’t relate very well to ocker/bogans. Sure they can be lovable and roguish, and like Lon, blokey, but there are other parts that don’t sit well on me. And this is where familiarity with your own culture and reading can be an issue – I know these people and they’re not my tribe. I had moments of fluctuating emotions for both of the MCs. There were times when I really felt for them and I would just get into my stride with them and they would do something to annoy me.  It was nice that Lon offered Casey his strength to lose himself in and feel safe. Casey was caring and gave Lon someone to come home to and want to live a life with after some sadness. That they both had histories meant they could at least relate.

There are some humorous moments. When Lon was being checked out at the beach by Casey’s friends, Devon and Ash, along with Casey, it was funny. Renae Kaye has a good sense of humour and that shone brightly in the book. The way Casey and Devon speak to one another is camp and I enjoyed that. The relationship between Devon and Ash was off-beat and I also liked that.

At the end of the day, I can see why this book has rated well with a lot of readers. There is a hurt/comfort vibe – big bear of a man who wants to love someone and has a past, cute younger guy with a nasty family backstory needing that support and love, and also finding himself along the way. Loving back. But for me it was a matter of 1) familiarity with the culture being a hindrance, and 2) too many events spoiling the main story and character development. However, it was an easy read, there was a lovability to the idea of the relationship. I did like Lon calling Casey “Casey-love.” It’s quite Aussie in its delivery and reminds me of someone I can’t put my finger on, but it’s a fond memory. I would read Renae Kaye again, but I would go in knowing she is more about the lighter side of life… irrespective of a brooding cover and darker sounding blurb. 3 Stars!

Previous post
He’s Just Knot That Into You, Nico Jaye
Next post
Out of Order, Eric Gober

This looks like a nice story, but one that could’ve been improved had it not been so… busy, I guess is the word. I’m a sucker for age differences between characters (as you know) so that would have been a big plus for me early on. I like how the Aussie-isms were accurate, but I also get why you are hesitant to read books set in Australia. It’s like me with books set in the southern part of the U.S.

It is Aussie through-and-through, which is good. Yes, it was a bit busy. I do know you would have liked Lon and Casey 🙂