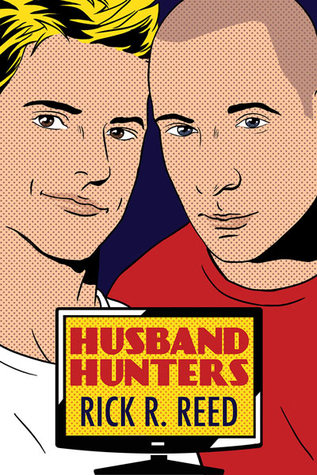 Stop by On Top Down Under on September 29th when Rick R. Reed will be stopping by as part of the HUSBAND HUNTERS blog tour!

You never know where the love of your life might turn up.When Matt Connelly suggests to his best buddy Cody Mook that they head to downtown Seattle to audition for the gay reality TV show Husband Hunters, both agree the experience might be a lark and a chance to grab their fifteen minutes of fame. What they don’t know is that the show, modeled after HGTV’s House Hunters, will open doors of longing neither expected. For Matt, the secret love he has long harbored for Cody might be thrust into the spotlight. Cody might realize his search for his perfect-forever-man extends no farther than the man who’s always been at his side.Husband Hunters promises laughter, tears, and, just maybe, a happy ever after. Will Cody and Matt’s story be one of best-friends-to-lovers—or an outright disaster?

This is the ultimate friends-to-lovers story. Cody is looking for love but he’s going about it the wrong way. He has random hook-ups with the hope that maybe, just maybe, one of those guys will be the one. He’s content with his life for the most part. He’s a good looking guy and never has problems finding company for the evening. He adopts a dog, Ryder, who he falls instantly in love with. Then there’s his best friend, Matt. Matt is the only real constant in Cody’s life. Matt is always there to make Cody laugh or to keep him entertained when he just wants to hang out. He’s the ultimate best friend. Matt doesn’t have the luck Cody has with the guys and it’s sad, really, but he seems like he’s a happy guy anyway.

On a lark, Matt talks Cody into auditioning for a reality show, Husband Hunters. Husband Hunters is like the show House Hunters, only it has gay men looking for love instead of prospective home buyers. “It’ll be fun!” Right? Well, maybe. It takes a bit of convincing, but eventually Matt wears Cody down and before the day is over, they are at the auditions. When they both receive calls that they’ll be on the show – at the same time, yet not – it kind of causes problems in the otherwise perfect friendship. What happens when one best friend cares too much for the other one and it’s not reciprocated?

Cody and Matt agree to be on Husband Hunters and each man realizes just how real reality television is – or isn’t. Matt has secretly been in love with Cody since not long after they met. He hopes that this is what it will take for Cody to finally open his eyes and see that the love he’s been looking for is right in front of him and has been for awhile.

I have to admit that I wasn’t too keen on Cody during certain parts of this book but I will say that that lack of love (so to speak) changed later. There are times when I was seeing him as a bit of a jerk, but in reality, he was just being honest. One of my all-time favorite songs is mentioned throughout this book in regards to Matt’s feelings about Cody. It seemed very fitting for what Matt was feeling over knowing he was deeply in love and the other man was not feeling the same.

I got teary in more than one place in this story because it’s true. You can’t make someone feel something they don’t. I hurt for Matt and how he just wanted Cody to open his eyes, but what happens if he does and doesn’t see things the same? You can’t not feel sad for the guy.

Then everything changes. The way things changed were what really made the story for me. Oh, don’t get me wrong, the story was excellent reading up to that point, but I love how there was a turn around and the tables were turned. Saying anymore than that would be too telling, but I love how it all played out and came together.

I adored Matt from his introduction. He’s one of those characters who the reader will want to give a big hug one minute and the next a big swat on the back of the head. More than once I was thinking “He’s not good enough for you. Move on.” But of course moving on is easier said than done when your heart is so involved.

Overall, a very good book. I love the idea of the reality show. Even more, I love how it was there but the author made sure Matt and Cody were center – not just what they had to do for the cameras. There’s a wonderful character whose name is Martha Stewart (yes, you read the name right). You’ll either love her or hate her. I adored her from her introduction.

I read the dedication on the author’s Facebook page and got a bit misty-eyed, and then got misty-eyed all over again when I read it in the book. Very touching.

I have to mention this, and the author will get it, even if others don’t unless they’ve read IM (if you haven’t, you need to) – Macaulay Culkin? I’ve got to say he wasn’t quite who I pictured in the role while I was reading the book, but the more I think about it, the more I think he would totally work. 🙂

Thanks so much for the wonderful review…it’s great to get the book off on such a promising start. You made my day!

Thank you for writing another great book. 🙂

Nice review, Cindi. It sounds like there is a bit of emotion involved and that is a good thing.
It also sounds a little different too.

Thanks, Kazza. There is quite a bit of emotion involved and it’s a very unique story because of the reality show. I really enjoyed it a lot.