Blogversary Author Post: Writing and Resistance and a Hell of a Muse, Jess Whitecroft

I invited Jess Whitecroft on last year for our 5th blog anniversary because, after reading a couple of her books, I knew I had found this incredibly intelligent, enormously funny, socially aware author who could also write good sex – hey, I’m still a perve. Perve aside, I love intelligent, satirical, and socially aware writing in combination. I particularly love the rawness of this author’s characters. Every single one of her MCs is layered and vulnerable. They are so open and honest and real, even secondary characters like Justin from the FuBar series, especially Justin, are stuck in my heart and my head. I must admit I was excited as I read this post, here was an extension of that writing honesty, passion, and intelligence I enjoy so much and keep going back to. If you read in MM, or as I call it, gay romance, then you really do need to check out Jess Whitecroft’s catalogue of books. There are reviews for all of them on this blog if you’d like to check them out – except Going Roswell, which I’ve planned as reading material for the gap between Christmas/New Year.  Thanks to Jess Whitecroft for being a part of our 6th blog anniversary.

It doesn’t seem like a year has passed since the last time Kazza was so kind as to ask me to write a Blogaversary page for OnTopDownUnder. These days I tend to measure time in the spaces where novels get written, and it’s been a busy year, full of alien abductions, rock stars, drag queens, casino grifters, and incredibly gay pirates. 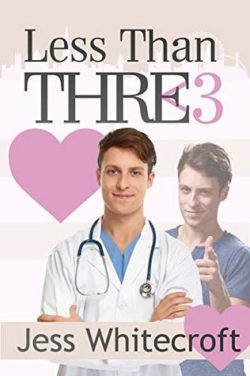 Last week I released my tenth novel – Less Than Three, currently 0.99 on Amazon – and that was when I realised I’d written ten books since These Violent Delights in June of last year. It took me by surprise, because once upon a time I’d been the kind of writer who signed a contract to produce a novel in six months and actually thought, “Wait, am I capable of that?”

Of course, that was before Amazon came along, and we all had to start writing at the pace of starving forties pulp writers, just to become even a drop in the staggering ocean of words published on a daily basis. It changed the game. That and advancing age, and the possibility of spending my retirement years eating catfood.

So, I had a whole book plug thing I was going to write for this post (and by the way, Less Than Three is currently 0.99 on Amazon) but it didn’t feel quite right. It felt somewhat insincere, and over the years I’ve come to feel that insincerity is my creative Kryptonite. I’ve done it before. I’ve looked at my bank balance, freaked out and cranked out romance novels to order. They ticked all the demographic boxes, they had the right number of sex scenes and the correct amount of crying. And they did what they were supposed to do. They made me money, but they also made me queasy.

And the reviews? They were okay. Mixed. Naturally I memorised all the worst ones, because that’s what writers do, but among some of the worst reviews were things I agreed with. I had made that heroine too passive, because that was what I thought would sell. The hero had come across as manipulative in places, but I’d gone with it, because I didn’t care enough about him to make him act like his best self.

I don’t like those books. I regret those books, because I wasn’t telling the truth.

You can always tell a bullshitter – or a lousy writer – when someone busts out that old line: “I’m a professional liar. I write fiction.”

Uh uh. If you can’t tell the truth, don’t write fiction. Good writing is not about telling lies. Good writing is digging down deep into the emotional core and pulling out those truths we can all relate to. And I’m sorry if I sound too intense for someone who essentially writes books about drunk people affectionately licking one another’s buttholes, but like I said – not very good at pretending to be someone I’m not. I was always very bad at it and somehow got worse with age. Not sure how that works, since it should be the other way around, but there it is.

I see so many writers out there who are trying to tick those demographic boxes, trying to write-by-numbers so they can rake in the cash. And so often they burn out. They get miserable, the same way I was miserable when I wasn’t writing honestly. And that’s a horrible thing. A sad thing. And really, life is far too short to spend writing things that don’t satisfy you. There are thousands of ways to do things you hate for money. Writing shouldn’t be one of them. The reason I’ve been able to write ten books in eighteen months is because I love what I’m doing right now. I might not be #bossbabing my way to my sixth yacht, but I get by. And I love it.

These days I see so many people telling young writers that they need to be marketing geniuses. They even have a vaguely disparaging term for the books that these kids want to write, but shouldn’t, because they’re not marketable. They talk about ‘the book of your heart’ in faintly tittery tones, as if there’s something frilly shirted and arty-farty about wanting your authentic voice to be heard. How? Why? Isn’t that just a simple human desire? Wanting to be heard? Wanting to be accepted, and understood? If that makes me a frilly-shirted art-fart, then fine.

There’s a book by Steven Pressfield – The War of Art – that I recommend to anyone who wants to write. It starts with a workmanlike, no-messing approach to writing: it’s work, so shut up, put up and prepare to be miserable. The second section gets into how the creative energy so often gets shut down by Resistance, a capital lettered monster that takes many forms – procrastination, self-doubt, laziness. Then in the third section, Pressfield straight up says ‘If you’re not into the idea of spiritual concepts, skip this.’ 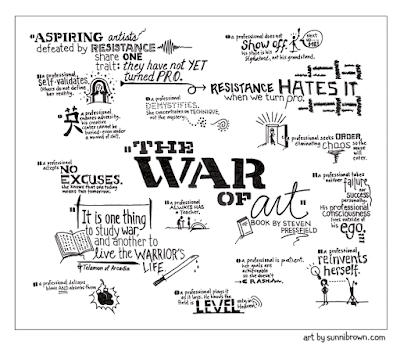 I admit, I was all for skipping. Because I’m about as spiritual as a spongemop. But I kept reading, and I got sucked in. Pressfield is a classicist, who was given the freedom of the City of Sparta for his book about Thermopylae, The Gates of Fire, and when he described his daily writing there was a thing he always did. Religiously, if you must. He sat down, and actually invoked the muse. He read aloud the invocation from the beautiful T.E. Lawrence translation of the Odyssey.

Sustain for me now this song of the various minded man,

Who after he had plundered the innermost citadel of hallowed Troy

Was made to stray grievously about the coasts of men.

I’d gone into the third section of the book thinking ‘Okay. Artists and their funny affectations,’ but before I’d even got to the end of the invocation I found myself having to take off my glasses and wipe my eyes so that I could keep reading. Then he pointed out that Homer is asking the muse to sustain the tale. Not to write it for him, but to sustain it. To keep that ball in the air, keep the thing going, keep that creative energy flowing, lest Resistance come whining at the door and muttering to Homer that he’d be far better off wandering off and doing whatever it was that people did to waste time before they invented the internet.

Now, I don’t know if I believe in muses, but I do believe in Resistance. I’ve felt the bugger snapping at my heels enough times to know that Resistance is real. But if we can give Resistance a name, why not give its opposite – creative energy – a name or nine? Urania, Calliope, Euterpe, Thalia, Melpomene, Clio, Erato, Polyhymnia and Terpischore.

Pressfield says one last interesting thing about the Muse: you don’t want to piss her off. He says if you spend every 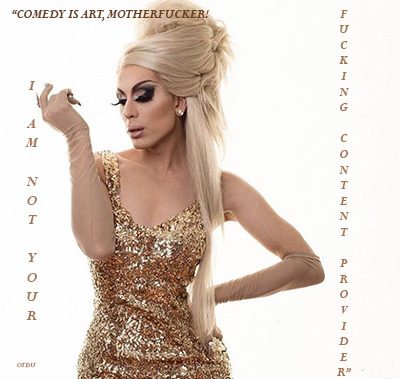 last moment trying to second guess the market, rather than writing your truth, the Muse will wash her hands of that work. Sounds flaky, I know, but I look back to those books I wrote years ago, the ones that still leave me feeling faintly greasy, and I get what he was talking about. Besides, my current muse is Bunny Boyle, in full Mommie Dearest drag, screaming “COMEDY IS ART, MOTHERFUCKER! I AM NOT YOUR FUCKING CONTENT PROVIDER!” This is not a muse I want to annoy.

So, yes. I think what I’m trying to say is forget the marketing. Forget worrying about what will sell or won’t sell. Anyone can learn marketing, but not everyone can sustain a story that’s going to vibrate down five thousand years and make me sob before I get to the end of the first page, because Odysseus’s homesickness is still real, still human, still true. Go forth and write ‘the book of your heart’. Write your truth. That’s what I did, and I wrote ten novels in eighteen months and I’m having the time of my life. You can’t put a price on that.

Thank you for reading, and thank you again to Kazza and all at On Top Down Under Book Reviews for entertaining my semi-senile ramblings. Happy readings, happy readings, and I hope the next twelve months are good to you. 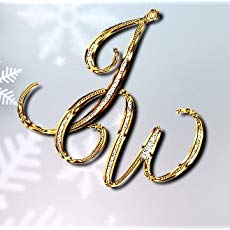 Jess Whitecroft was born and educated in the UK, where she was once voted ‘Most Likely To Think That Writing A Romantic Comedy About Bigfoot Is A Good Idea’.

After serving an apprenticeship with the late, great Black Lace books, and after many genres and many pseudonyms, she returned to romance, with a fondness for telling unconventional stories about unconventional lovers.

Great post. An author friend has always said that the day she starts ticking off the boxes (as it’s put in this post) is the day she needs to stops writing. It’s the passion and need to write that keeps her doing it. And from a reviewer’s standpoint, we can often tell when the books we’re reading are written by authors who are just following the motions.

Thank you for stopping by to help us celebrate our 6th year!

Thanks for this great post. I’m a big fan since I discovered you on this blog. Kazza’s glowing reviews sent me scurrying off to Amazon and I’ve loved everything I’ve read so far. Wishing you all the best on your future endeavors.