It’s that time of year again. On Top Down Under is celebrating another anniversary. Yay! Congrats on 6 amazing years!

You know what other time it is? It’s when the elves and reindeer in the North Pole start getting naughty and wanting their stories told. Santa Claus is very particular about keeping things secret. I mean, he is the Santa Claus after all. It’s not like the rest of the world has been privy to a whole lot over the past few generations. Look at the fairy tales written about Santa and his flying reindeer. People still believe he’s this jolly old man with a long white beard. Trust me when I say there’s nothing remotely jolly about the guy, and he doesn’t look a day over thirty-five. And dare I even mention the Mrs. Claus that the world believes is sweet and makes sugar cookies? Ha! That ho, I mean woman, probably doesn’t know where her kitchen is, much less how to turn on an oven. The word sweet has never been in her vocabulary. She gives new meaning to Santa’s Ho! Ho! Ho! 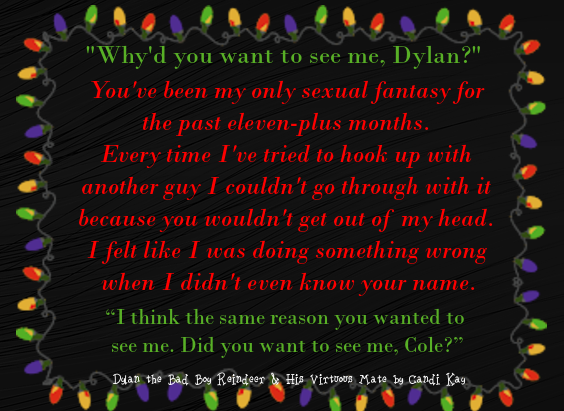 Unfortunately (or maybe fortunately), Elf Willy has other ideas. He wants everybody to have what he and Chief Reindeer Randy have. If that involves sticking his little elf nose in things that don’t concern him, what of it? Is it his fault that he just happened to see Reindeer Dylan and Reindeer Cole making goo-goo eyes at each other during the Christmas party last year before Dylan took off? I think not. It’s been a year and they’ve still not gotten off their hot reindeer butts and found each other again. Heck, they don’t even know the other one’s name. Willy can’t have that. He’s determined to hook these hottie reindeer up come hell or Peppermint Whiskey. Of course, there will be some challenges. Cole is the most straight-laced reindeer he’s ever met. And, Dylan? Well, he’s a bad boy who lives and works in the worst part of the North Pole. Mistletoe Hill may be fun and games for those wanting to take a quick ride on the wild side, but it’s not exactly Cole Crawford’s kind of place. How can they meet when they’re a gazillion and thirty-two miles away from each other?

Ah, but then fate gets involved and Willy makes it his elfly duty to bring these two reindeer together once and for all. Sure, there might be a little drama involved in doing so, and maybe even a nip or twelve of Peppermint Whiskey, but the elf is determined, damn it. What Willy doesn’t know as he starts his matchmaking mission is that there are some powerful people who will stop at nothing to make sure certain secrets stay hidden – especially those involving the big man himself.

To help celebrate On Top Down Under’s 6th year, I’m giving away an e-copy of one book (winner’s choice) from the Willy the Kinky Elf series, including the upcoming Dylan the Bad Boy Reindeer & His Virtuous Mate. Willy has also offered to throw in one of his “Santa is a butt head” magnets to the winner. Not interested in Willy’s world? The winner will have the option of receiving the complete Taking Lance series (combined into one e-book – over 170,000 words) in the format of their choice. The magnet will go to the winner regardless of what book they choose if they’re interested. 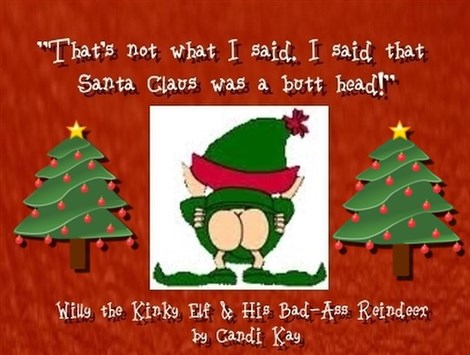 To enter the giveaway, leave a comment on this post before midnight Oct 28th, US EST, and a winner will be chosen at random and notified via email. You’ll have 48 hours to respond back or another winner will be selected. Good luck to all who enter!

Congrats to On Top Down Under on 6 years and a huge thank you for the support you’ve given me since I published my first book! I’ll forever be grateful. 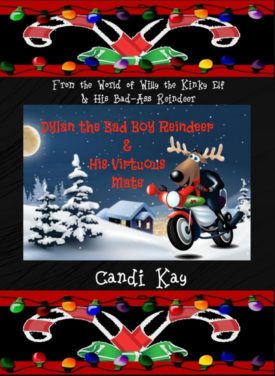 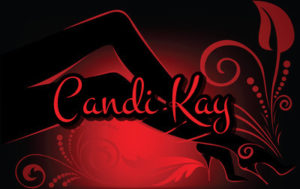 A blogger by day, at night Candi Kay transforms into a writer of various genres, with an emphasis on LGBTQ and erotica. Author of the Willy the Kinky Elf & His Bad-Ass Reindeer series, Candi’s books are often filled with humor, lovable and kooky characters, and sweet happily-ever-afters.

You can find Candi on –

I do love me a bad boy with a good boy. It’s a whole lotta fun. 😉 Thanks for the giveaway and happy blog anniversary.

This sounds amazing. I hope to read them. Happy Anniversary!

Yay! Congrats on 6 years and thanks for having me. 🙂

We don’t feel a day over 66, lol. You’re always welcome on the blog. Happy Willy time of the year 🙂

LOVE this series! Looking forward to continuing this year ????

Thank you so much, AnnMarie! I can’t tell you how thrilled I am that you enjoy my crazy Christmas world. 🙂 I hope you enjoy Dylan and Cole’s story.

Congrats to AnnMarie who won the giveaway! She chose Barry the Lonely Reindeer & His Bashful Elf as her winning book, but Willy felt she needed Dylan the Bad Boy Reindeer & His Virtuous Mate as well. 😉

Thank you to everybody who entered. And congrats again to On Top Down Under for 6 amazing years!