It’s All Fun and Games Until Someone Ends Up Wearing a Cone!

That’s a cute little saying printed on scrub tops that many of my veterinary nurse friends wear. The dreaded Elizabethan collar, aka cone of shame, which shows the world one of our four-legged friends just won’t stop licking that open wound.

What, you ask, does this have to do with a romance novel?

I pose this question, what doesn’t it have to do with a romance novel?

Hurt/comfort is in just about every book, movie or television show ever. Sometimes it’s subtle and a very minor part of the plot. Other times it’s front and center and is the plot. However, this is one of the building blocks of storytelling. A character who is hurt in some manner has to recover, and this, in part, is what creates conflict and tension in a story.

The hurts can run the gamut from a minor ding to one’s pride to a life altering injury. It can be physical, mental, emotional in any combination or all three. When one character is hurt so many things can happen in a novel. A love affair begins, or is strengthened. Possibly a relationship ends. The outcomes are as varied and many as there are books on this planet to read.

Hurt/comfort isn’t a trope, but a basic ingredient to a story.

So, what does this have to do with dogs wearing cones? It turns out in my upcoming novel, High Test, quite a bit. Two men, Neal and Hayden reach an impasse in their relationship. Neither wants it to end, but they’re not exactly sure how to get it moving forward again. Enter Neal’s two dogs, Royce and Marty. Neal coaxes Hayden back into his life by asking for help with his dogs. Neither dog is actually hurt, but Hayden assumes the worst and that’s the icebreaker that gets the two men talking and working out their relationship issues.

Dogs and cones, good for all sorts of wound care and solving romantic relationship problems!

There are other hurt/comfort moments throughout the book. Some are big, some are smaller but they all serve to bring these two men who are from two entirely different worlds together.

I’d love to know your opinion on this whole hurt/comfort staple of storytelling. What are your thoughts?

Everyone commenting will be entered into a chance to win a free eBook off my backlist, anthologies and bundles excluded. There will be one winner for every 10 comments. I’ll pick the winner/winners on November 1, 2017. Prizes will be made available through the Dreamspinner Press webstore. 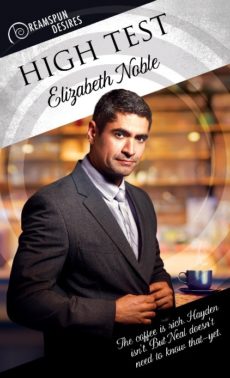 Hayden Owens is just your typical graduate student working his way through school as a barista for the Owens Coffee Company—no relation. But he keeps the “no relation” part to himself when he meets dashing, older Neal Kirchner, a successful architect from an old-money family. Hayden doesn’t exactly lie, but he figures it can’t hurt for Neal to believe he’s a rich kid. After all, Hayden doesn’t want Neal thinking he’s a gold digger.

The closer they become, the harder it gets for Hayden to come clean. Something always seems to get in the way. When a company bankruptcy and a jilted, vindictive woman threaten to expose his charade, Hayden thinks it’s all gone down the drain. Luckily Neal is ready with some innocent trickery of his own.

The excerpt below is a hurt/comfort scene where Hayden is embarrassed and insecure and Neal rescues him without being dramatic or obvious. It reinforces to Hayden that Neal is truly interested in him despite age, financial and cultural differences that have the potential to ruin things before their relationship even gets started.

Excerpt:
Hayden took another drink of the wine and made a go on motion with his hand. “Yeah?”

“Another story for another time. I have to have something to keep you coming back,” Neal said and laughed. The disk flashed green, and Neal held it up. “Our turn. I don’t know about you, but I’m hungry!”

Hayden had another bout of insecurity as they were seated at their table. He picked up the menu and stared at it, not knowing what to do. He’d always been taught to choose a midpriced meal when he was someone’s guest. Before he could stop the words, they tumbled from his mouth. “There’s no prices.”

Neal peeked over the top of his menu and Hayden could tell by the way his eyes crinkled again that he was smiling. “I think these types of places do that so your meal isn’t ruined by the indigestion caused by it being overpriced.”

Hayden managed a small smile. He took another drink of wine to try and steady his hands and calm his nerves. Then the thought crossed his mind that he should slow down on the wine on a basically empty stomach. “They have an interesting selection.” The truth was he didn’t know what half the items listed were. There appeared to be foods like burger sliders and chicken bites, but they were doused in spices and sauces Hayden had never heard of before. Even the salads were made of exotic ingredients.

“I’ve read some reviews online that said the food is very good, even if they use pretentious words to describe a cheeseburger. I have to confess to an ulterior motive for suggesting this restaurant. I’m always on the lookout for places that have a diverse menu to take clients. Being Hindu I don’t eat beef or pork, but I can’t exactly ask clients their dietary needs in regards to religion. So, I suggest meeting places with online menus and plenty of protein choices.” Neal smiled when the waitress arrived and inquired if they were ready to order. “I don’t know about you, but I love a good chicken burger. I’ll have the blackened Boursin burger with chicken instead of beef please, roasted apples, and baked potato with creamed spinach. Oh, and could we get an order of spinach fondue as an appetizer?”

The waitress nodded. “Absolutely.” She turned to Hayden, pen poised over her order pad.

“Um….” Hayden’s panic came charging back stronger than ever.

“Do you need a little more time, sir?” The woman sounded pleasant enough, but Hayden couldn’t shake the feeling that she was mentally mocking him for being so unsophisticated.

“You know, the rack of lamb looks good too. I can never decide,” Neal said and laughed. “How about we get that as well and share?” He winked at Hayden. “Could I add a bottle of the Bouchard?” He held his glass up, and the waitress smiled, gaze slipping to Hayden for a brief second.

Mystery, action, chills, and thrills spiced with romance and desire. ELIZABETH NOBLE started telling stories before she actually knew how to write, and her family was very happy when she learned to put words on a page. Those words turned into books and fan fiction that turned into a genuine love of M/M romance fiction. Being able to share her works with Dreamspinner is really a dream come true. She has a real love for a good mystery complete with murder and twisty plots as well as all things sci-fi, futuristic, and supernatural and a bit of an unnatural interest in a super-volcano in Wyoming.

Elizabeth has three grown children, two grandchildren, and is now happily owned by an adorable mixed-breed canine princess and her sidekick tabby cat. Elizabeth lives in her native northeast Ohio, the perfect place for gardening and winter and summer sports (go Tribe and Cavs!) and stargazing all year long. When she’s not writing, she’s working as a veterinary nurse, so don’t be surprised to see her men with a pet or three who are a very big part of their lives.

Elizabeth has received a number of amateur writing awards. Since being published, several of her novels have received Honorable Mentions in the Rainbow Awards. Jewel Cave was a runner-up in the Gay Mystery/Thriller category in the 2015 Rainbow Awards. Ringed Love was a winner in the Gay Fantasy Romance category of the 2016 Rainbow Awards.

I agree that hurt/comfort is a basic ingredient to a story. I love how you used the cones to express your point. As a romance reader I believe there has to be hurt/comfort – even if it’s only minor – in order to make a story interesting.

High Test looks really good. Thank you for stopping by to help us celebrate our 5th year and for the great giveaway!

Thank you for including me in your blog-versary!

Thank you for the interesting post. I don’t think I’ve thought of stories in such a way before and you’ve open up my eyes about it all.

I’m never really looking for dramatics but hurt/comfort is important to me so I experience a connection and feelings for people. 🙂 Thanks for the post, giveaway and the details about High Test.

So many memories this post stirred in me. My old dog Patch had a cone of shame once. Oh how she hated that cone. She’d go round and round in circles and try to shake it off then paw it other times. She always was the sneakiest escape artist. It’s the Border Collie way. 😀 So your post reminded me how terribly my partner and I missed Patch when grew old and crossed the rainbow bridge. She was our baby. We took turns being there for one another when one of us had the saddest grieving days. It was comforting… Read more »

I want the hurt and comfort. In the real world we’re not always happy, happy. While I know the books I read (and write) are fiction, I still want realistic couples and situations.

Thanks for the post! I agree that some degree of hurt/comfort (or at least overcoming some type of hurt) is an important element to stories. I personally happen to like a strong dose of hurt/comfort in my stories.

P.S. We’ve had both a dog and a cat have to wear the cone. And our cat acted we had killed him with shame when we put it on him.

Thanks for the intriguing post. I was ready to say I’ve read a number of good books that didn’t have hurt/comfort. But I was thinking about the trope. And yeah, I think it is a trope, but you opened my eyes that it can also be something else. The trope can be an easy fall back authors too often use where I end up rolling my eyes. But I like realism, and as you explained, in more subtle forms, hurt can be present in so many realistic stories, creates tension, and you want the comfort to come.

Surviving a hurt, dealing with it, and receiving comfort are all events in one’s life as it evolves. Major or minor, the elements of a hurt/comfort theme fleshes out the characters and makes them seem more ‘real’ to the reader. It’s one of the reasons why I enjoy well-written mm fiction.

CKay is the winner of my contest! If you can shoot me an email at elizabeth dot noble19 at gmail I’ll arrange for you to collect your free eBook. You may pick from anything on my backlist (2016 publication or earlier), with anthologies and bundles excluded.

Thanks, Elizabeth! I just sent you an email.

Congrats again to On Top Down Under on 5 years!