So the other day I was talking to my seventy-two year old mother on the phone when she asked me where she could order my book. Now, just a little back story here if you will. My mom knows what I write. She read my debut novel, Falling For Him, when it came out just after she finished reading the bible. Yes, you heard me right, she had just finished reading the bible and then went on to read my bisexual romance wherein two men fall in love and have lots of sex. The reason I’m telling you this is because she’s okay with what I write. I was assuming she was referring to the book which had just came out, Loving Sarajevo, because it was another fluffy (sort of) romance book but no, no she wanted “that Politics book” I’d written.

Small sample of the conversation:

Me upon hearing her request: Um…I’m not sure that’s the book for you.

Her: Why not? I like thrillers and that woman who reviewed it said it was well written and—

Me: It’s a bad (by bad I meant dark but I was flailing at this point and finding words was hard) book, Mom, I’m not sure you’ll like it. (while silently cursing Kazza for writing such a compelling review that it made my mom want to read my book so badly)

Her: It sounds interesting.

Her: She said that the bad guy stays bad and that you did a good job writing him. I’m going to read it.

Me: Okay but don’t say I didn’t warn you. (silently wonders how much longer my mother will love me)

I’ve been trying to down play Backdoor Politics to her for some time now. When she asks what I’m writing I’d mention it but tell her it was about a hit man, or it was about a kidnapping, or it was about the not so nice side of politics. I never told her about the darker elements of the story, because what would she think of me if she knew the sort of book I was writing? Would she question where she went wrong and how she raised such a disturbed person? My mother, literally one of the sweetest, kindest people you’d ever meet (ask anyone who knows her, seriously, you’ll not find one person who would have a bad word to say about her) is going to read my darkest book and I’m going to have to answer for it.

I bring this up because writing something so dark with a character who has no redeeming qualities and is, quite frankly, a psychopath made me wonder about myself at times. Where did this guy come from? Is he a part of me? Me, the woman who’s June Cleaver if you took away the outfit and added a bunch of fucks to her dialog. Could I be just a little bit twisted?

Getting into the mindset of someone so different from myself was surprisingly easy. It was disturbing at times just how seamlessly I could go from baking cookies with my kids to writing about torture and murder. Kamal just oozed out onto the page. Maybe it was because he was such a clear-cut character, or maybe it was just too much fun writing about someone who didn’t have to live by the rules. I don’t know, but the whole time I was writing him I kept finding myself wondering what he’d do in certain situations throughout the day. It made me grin because most of the time I figured he’d do what I wanted to do but was raised too well to actually do. (See mom! You did a good job! I’m not a psychopath! Please love me!)

Writing Backdoor Politics was oddly freeing in more ways than one. It was nice not to feel like I needed to have the typical happy ending because I didn’t have the normal romantic set up. Could Kamal have done an about face and become someone who learned to love again? I guess he could have but he didn’t want to, it wasn’t in his character. Staying true to his character was very important to me and he gave me no indication that he was looking for redemption through the love of a good man. I loved that about him, no matter how hard it was for me to write, because there were times I wanted him to just grab Zijad and hug him. (I am human after all.)

I’m not sure what writing this story says about me as a person, or the fact that I liked doing it, and I guess it doesn’t really matter. All that matters is that Kamal’s story is out there, and I hope people who read it understand that it needed to be told and maybe enjoy it.

Oh, and Mom, if you’re reading this, I’m sorry. Please don’t disown me. 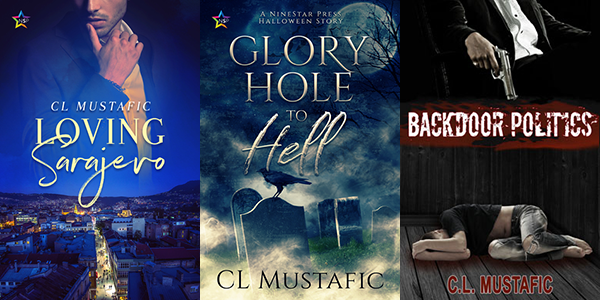 CL Mustafic is a born and bred American mid-westerner who mysteriously ended up living in one of those countries nobody can ever find on the map of Europe. Left with too much time on her hands – let’s be honest here it was the lack of television channels in her native language – and too many voices in her head trying to fill the silence, she decided to give her life-long dream of writing a novel a shot. So now between shuttling kids back and forth from various activities, risking her life on the insanely narrow, busy streets of her new home town, she loses herself in her own made up world where love always wins.

Your mum can’t trust me. It’s a well known and documented fact that I lead people astray. 😀

I lay all the blame at your feet. If she disowns me you better set an extra place at your table for the holidays. 😉

I second what Kazza said. I’m proof that she leads people astray. 😀 😀 😀

In all seriousness, I love this post. You are very lucky to have a supportive mother. I’ll now be curious to know what she thinks of the book after she reads it. You’ll have to pop on here and let us know. 🙂

Thanks for stopping by and helping us celebrate our 5th anniversary!

She is pretty great. I thought about not telling her what I wrote but then I would have missed things like her going into Barnes and Noble and asking them where she could find my book only to have the cashier tell her she had to order it online because it’s not in stock. I’m sure she got a funny look when they saw the blurb for the book they helped her order. I will be sure to let you know what she thinks of Backdoor Politics. Maybe if she makes it all the way through (I have my doubts… Read more »

You really are lucky to have such a supportive mother. Mine knows I write but I’ve gone to great lengths to keep her from finding out what name I write under. If you knew my mother you’d understand. 🙂

Your mom sounds wonderful. Thanks for sharing the post.