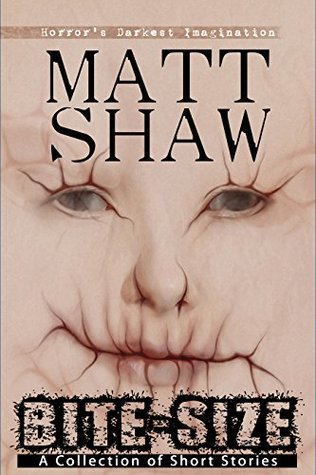 Some times people do not have much time in their lives. Deadlines are looming at work, kids are playing up, dinners need to be prepared, errands need to be run… That is where Short Stories fit so nicely into their lives. A quick little escape to another world whilst battling with the stress of every day life. A quick read here, a quick read there…

This is a collection of Short Stories from author Matt Shaw:

As the title and blurb state, this is a collection of very short stories. With each story only being a few pages, my reviews are brief. My above rating is for all stories combined. 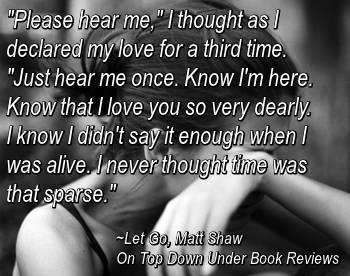 What happens when suddenly you’re just… gone? Your wife is crying. Your family members are gathered around, also crying. You try to get their attention, but no one can hear you. There’s a bright light always close by pulling at you, but you fight it because you want to know what happened. You know you’re dead, but why? What could’ve happened? This tells the story of the main character in this story. It’s extremely short, so I won’t say more than that. I will say that this is unlike anything else I’ve ever read by this author. It’s… touching. Matt Shaw wrote it and I said touching? Well, yeah. This story proves this author can go beyond the gory horror that his fans (like me) know and love. 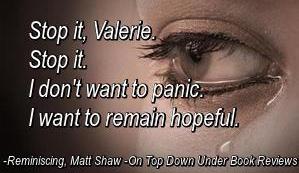 Like Let Go, there’s not a whole lot I can say about this story without giving it completely away. It tells the story of Valerie, a married woman with a son, who – for reasons that come out later – is reminiscing about the good things that have happened in her life; meeting her husband and falling in love, times spent at the cinema with his daughter from another relationship, her son and his joy and frustration while playing video games. She tries to keep sad thoughts at bay by focusing on every good thing that’s happened in her life.

This is (in true Matt Shaw fashion) one of those stories that leaves you thinking at the end. I can’t say more than that. 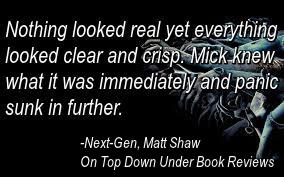 Mick is all about buying everything when it first comes out. You know the type of people I’m talking about. A new game console? They order it months in advance. A new cell phone? Oh, they are totally standing in line outside the store sometimes a day in advance just to be able to say they got the next generation of whatever new toy is being released. It doesn’t matter that that there are always bugs that need to be ironed out with these new products. People like Mick must have the first ones… always.

He ordered the newest game console way in advance. He paid way more than he should have just to have the latest toy. The excitement built and then suddenly the day arrived where he could actually have it in his hands. Unfortunately in his excitement he didn’t exactly think a few things through as he was setting everything up.

Brilliant story. Not much to it, but there doesn’t have to be. The ending is perfect.

Laughter in the Night 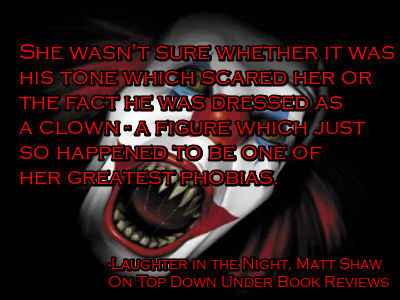 I’ll never use my microwave again.

This is true Matt Shaw. Oh, he put the first three stories in this anthology to suck you in and to make you think you wouldn’t be getting the gross and creepy stories he’s known for. Ha! Just when you think you’ll be reading a few tame quickies, he sucks you in and slaps you in the face with Laughter in the Night.

Beth and Tracy are a couple who live together. Beth works at a cat rescue center. Folks think her job is nothing more than playing with the cats and goofing off. That’s not true, of course, and this is proven on one particular day when a cat’s owner has, shall we say, issues in regards to his pet.

I can’t say more than that, but I will throw out a warning –

If you have a weak stomach and if a bit of gore bothers you, skip this one. 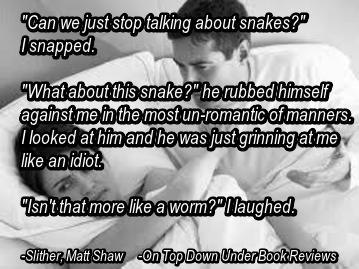 I mentioned my fear of clowns above. Now we have snakes. Yeah, the title of the story gave me my first clue.

Don’t let the quote and pic fool you. Like Laughter in the Night, this is not one of the author’s softer stories. It’s about, well, snakes. Enough said, I think.

Yeah, I know I should’ve added a photo of snakes, but the clown was enough for me.

While Slither is not outright disgusting, it’s still a bit on the gross side. 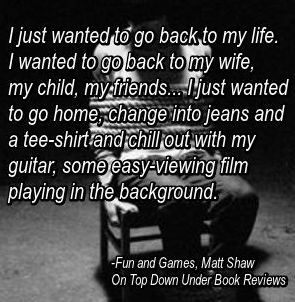 All the man in Fun and Games wanted to do was his job. Nothing more. Nothing less. He showed up at a customer’s place to install an automation system and ended up being tied to a chair and drugged. Not just drugged, but being forced into playing a sick game with the customer. The bad guy tells him again and again that once he completes the tasks in the game, he’ll be able to go back home to his wife and young son. The tasks are pretty bad. Think pliers and fingernails. Think knives on skin. That’s only a couple of things. But once he does all these things, will the man let him go? If not, what will happen to him?

You’ll have to read this to find out.

I can’t really type a review about Date Night – even a short one. Nor can I add a photo and quote. Almost anything I say will give it away and nothing angers me more than having a story ruined for me by someone who felt the need to say too much.

This isn’t your typical short story. It’s a screenplay (as the title suggests). A man is on a date and … well, I can’t say more than that. 😉 I will say that this is another of the author’s softer stories.

Overall, this is a great collection of shorts. It’s no secret that I’ve become a huge fan of this author and have enjoyed everything I’ve read of his so far. If you’re looking for ‘bite size’ stories that can be read quickly, I highly suggest this collection of shorts. However, keep warnings in mind (mentioned in individual reviews) before doing so.

The brilliance of this author is that he can say so much in only a few words, never leaving the reader wanting. That was definitely the case with all the stories in Bite-Size: A Collection of Short Stories.

Great review, Cindi. It’s hard when they are short and you don’t ever want to spoil them. Haha, clowns AND snakes, you did well to read them let alone review them.
Love the pics….especially the clown, he he

Thanks! After the clown thing, no way in hell was I adding snake pics. 🙂 You know that very little bothers me, but come on! Clowns and snakes.

It’s a great collection of shorts.