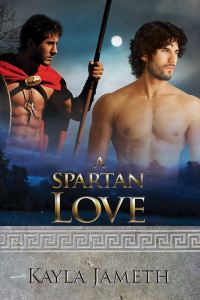 Alone, Andreas toils on a remote farmstead for a Spartan overlord. When a kryptes enters his world, Andreas fears for his life. The dreaded warriors stalk and kill helots—like Andreas’ father—as part of their training.

Andreas lives and works on a farm on his own. The farm is owned by a Spartiate but he lives elsewhere and Andreas produces/makes money for him. His father was killed by the kryptes (Spartan warriors) when Andreas was eight, his mother died when he was eighteen of the ‘fever.’ The fear of the kryptes killing Andreas looms large as he is a strong young man, and strong young men are targeted to keep the helots, enslaved masses, in line. Andreas’ company is mostly kept by Ictis, his ferret, and also Pan, his goat. But one night Andreas is certain a kryptes has turned up at his small home and he’s worried he will meet the same fate as his father. He doles out honey to the gods, some food for the kryptes left outside, and hopes they will protect him from death.

The Krypteia…the Spartan’s way of keeping the helots from rising up against them. The skulking warriors spied on the helots, searching out and targeting anyone they thought could be a possible leader, while developing stealth and their killing skills. No helot was ever truly safe.
As Andreas grew, each year coming closer to his father’s size, his mother had repeatedly warned him that this risk was more real for him. “The less the Spartan’s see of you, the better.”

However, the kryptes interests and scares Andreas in equal measure. Andreas is incredibly lonely as he stays away from town after his mother made sure that he knew to keep a low profile and therefore alive.  On top of this, the elusive kryptes has not stolen the bowl Andreas left out for him and, furthermore, he leaves some figs for Andreas. He can’t understand why he does this. Is there something more he wants from Andreas? Kryptes don’t do this, they kill you.

What was going on between the warrior and him? Why did the man seem to be seeking him out? After tonight and the gift of figs, Andreas couldn’t pretend nothing was amiss.

After a short period of food being exchanged, Andreas had become attracted before he even meets this 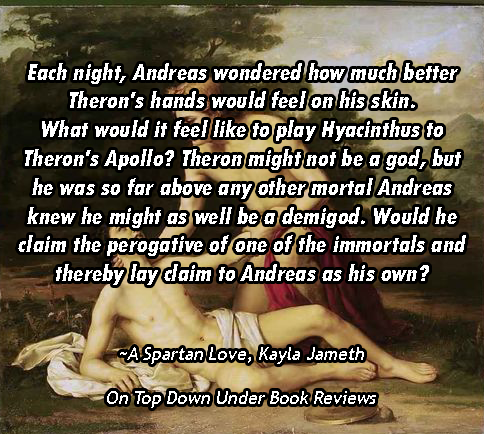 mysterious kryptes. Once he meets him – Theron – he is in lust, much to his dismay. He continually attempts to pass it off as his isolation and a need for company but, while that is true, he can’t deny there is more to it. As much as Andreas is lonely and desires human interaction, the need to feel (male) human touch dominates him. But he also worries about the wrong attention from the kryptes and being exposed. If he is a part of a group of trained kryptes, others in his agelai will know. He also worries about how his father died at a kryptes hand/blade, particularly after Theron admits he has been given weapons –

“I was granted this knife when I became a kryptes.”
Staring at the knife of a kryptes, Andreas fought not to shudder as a chill fist squeezed his heart. His father had died upon such a blade.  What was he doing, inviting a murderer into his home?

Theron is intrigued that a helot would be so brave as to let him into his home, let alone kind enough to feed him, and Andreas can cook better than anyone Theron has ever known. He is kind, hospitable and attractive.

The helot was a big, strong, handsome man – a deadly combination if the ephors had heard of him. But a combination Theron found attractive.
He wouldn’t mind rubbing up against that stout, muscled body.

Two of Theron’s kryptes shield brothers, Lysander and Coridan, are lovers, and Theron has been intimate 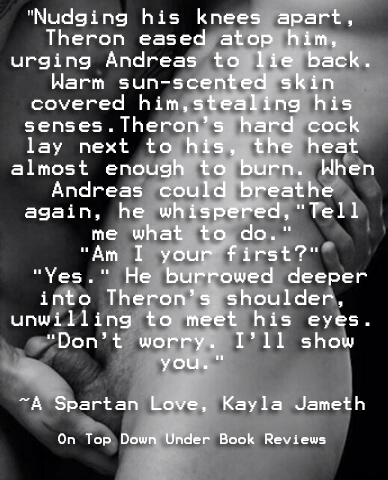 with other men. Because they are warriors and need to watch each others backs, no one says anything to the ephors, or those in charge. He misses sharing a blanket with another man but maybe he can have what the other couple have. Maybe he can have Andreas and a soft, warm bed. But if he stays in one spot too long the ephors and the other kryptes will wonder why, that will put Andreas in danger and, oddly, he doesn’t want to do that to this helot.

“They would kill me?”
Theron was startled at the vehemence in the quiet man’s voice.  “But not you?  You came here knowing the difference in our status would protect you and yet you still pushed me into this?”

Theron has made sure during his time stalking and then visiting Andreas to cover his tracks so no other kryptes will find him and therefore Andreas. He as no intentions of allowing anyone to kill Andreas. On top of hiding himself, and keeping Andreas and his relationship off the radar, a neighbour wants to marry his daughter off to Andreas. Charis is thirteen now and Andreas is twenty two, a good match for their time. Andreas doesn’t want the pushy Charis and things get complicated when Charis sees love bites on Andreas’ neck. Then Theron is injured and when Andreas looks after him, Charis is being pushier still and putting  moves on the gentle, attractive Andreas. To top it off, Theron has seen her hitting on Andreas previously, the reason he marked him, and is none too happy about his man being pawed over by the brazen girl. 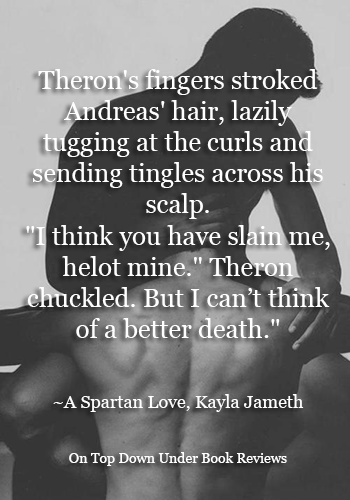 different classes – a slave and a warrior – the intertwining of mortal events and the Greek Gods. Zeus and Gannymede’s mythology is used to show how they were revered by the Spartans but, in utter hypocrisy, same-sex relationships were punished by them. Apollo, the healer, is used really well in the story and I am very keen to see where Kayla Jameth takes these two lovers and the other aspects of the series. Because it is a series there are some threads left hanging, but book #2 should help knit them together. The book is well written, easy to read, and the history is interesting but not heavy-handed. It is all well researched, the MCs are so good together, and hellishly sexy – the innocent, bigger, slightly older virgin and the predatory warrior who is possessive of his helot. I am looking forward to book #2 now. And that is a beautiful cover as well. 4 Stars!

An ARC was provided in return for an honest review.

What a great review of what I can tell is a very good book. I enjoy a good historical story when the author takes the time to research the time period well. It looks like a very interesting story.

Love the review and love the quotes and pics.

Oh yeah, the quotes are good (sexy) ones 🙂
It was a really nice book and good reading. I love a bit of mythology and some sexy historical times.
Thanks, Cindi.

Thanks for the great review. I’m glad you enjoyed Andreas and Theron’s tale.
The picts with the quotes on them were wonderful and look great on Twitter.

You’re welcome, Kayla. I loved the guys, they are a really good couple, I look forward to the next book now. I loved the mythology, I’m a sucker for it. Oh, I could have kept going with the quotes and the pics, you gave me some good ammo to use – sexy sexy 🙂

It was a great review. The pictures with the quotes absolutely rock!