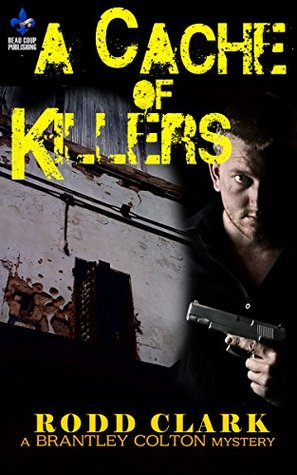 Brantley Colton never set out to be anything but normal…but with tragedy came transformation. In his search for peace he is confronted with the darker aspects of men’s souls and plagued by horrific murders at every turn. “Why does evil seem drawn to him like a wise virus contaminating his body?” In “A Cache of Killers” Colton runs across a ring of child abductors and killers and sets out to enact his own brand of justice…saving a life because his is so torn and tenuous. 18+ *This book contained dark themes and imagery that some readers may find disturbing*

The reader was introduced to Brantley Colton in Short Ride to Hell. Short Ride to Hell tells his back story. We discovered that his best friend Virginia was raped and murdered by a serial killer. He had also discovered, after her murder, that his own death was imminent. This led to a crusade to find the person who murdered his best friend (and others) and bring him to justice in any way possible.

A Cache of Killers picks up a year after the first book. I need to point out that you do not have to read  Short Ride to Hell in order to understand A Cache of Killers. The author does an outstanding job in laying it all out without being overly wordy. Had I not read the first book, I could have read the second one without feeling like I missed anything.

Brantley (aka Colton) has been running since not long after Virginia’s death. The running is for a variety of reasons (that I won’t spoil) but he has finally come to a crossroads and wants to just stop for a little while to regroup. He drives to Portland, Oregon, a place he had visited in the past and loved. He books a nice hotel room (unlike most of which he had stayed in over the past few months), and decides to play tourist for a bit. Unfortunately, the playing tourist idea goes out the window when he discovers that there are young, male hustlers being kidnapped from the streets, brutalized in ways one hopes to never imagine, and then dumped to be found later. As soon as Colton hears about these murders, he makes it his mission to seek out the person (or persons) committing the acts and bring him/them to justice – just as he had done Virginia’s killer. He doesn’t know what forces him to become so obsessed, but he knows that he will not be leaving the city he loves until it’s done.

I have to stress that what happens to the victims in this story is disturbing. I’ve read some of worst of the worst but there is something that really gets to me when it’s a child being brutalized. These boys may be teens, and they may have aged a lot on the streets, but they are still children. Parts were difficult to read because my mom instincts kicked in. What happens to these boys (some on-page) will bother some readers. Keep that in mind before reading this book.

There are other characters central to the story. There are the victims, whose minds the reader will go into a few times. There are two detectives who are as different as night and day who are trying to stop the killings before more teens are kidnapped. There is one victim that really got to me. I can’t say more than that, as they all really affected me, but this one? I really wanted to jump in and rescue this sweet boy before the horrors were inflicted on him that the reader knows is going to happen. Then there is Scuz, a street kid who the reader will either love or hate. I adored him on sight and was scared to turn the pages on my Kindle because I was scared he would be one of the many victims.

Then there is Brantley Colton, who hears the voices of the victims in his head as he pushes like hell to save them or prevent others from suffering what they had. You can’t not like Colton. He could have continued on with his mini-vacation and done nothing. He didn’t. He knew that someone (outside of law enforcement) needed to be doing something to save the male youths of the city.

The way everything came together was excellent. There were two ways it could have gone and either would have been understandable considering what led up to it. I was very pleased with the resolution of this book.

I only had one niggle and normally I wouldn’t bring it up with a story I enjoyed as much as this one, but I have to. Early on in the book, it’s a bit exclamation point heavy. While I don’t mind them on occasion, in this case they became quite distracting. Aside from that, I thoroughly enjoyed this book – just as I did the one before it. I eagerly look forward to the next story in the Brantley Colton Mysteries series.

Great review, Cindi. I can just imagine you and your ‘mom’ instincts kicking in. It also sounds like a tough read but very worthwhile.

Thanks, Kazza. It was a great read but yes, my mom instincts kicked in big time. I’m really looking forward to the 3rd one in the series.