Worth Waiting For (Dare to Dream #3), Bea LaRocca 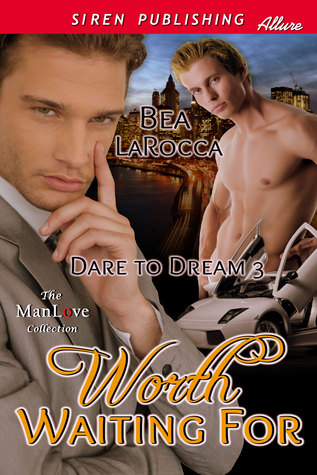 When Nick Stevens walked into the office, Marcus Anderson realized that he’d found the man of his dreams…until he learns that Nick is already taken. Determined to make the best of an uncomfortable situation, Marcus tries to keep a polite distance, maintaining a strictly professional relationship with his co-worker as he struggles to keep his personal desires to himself. Until the night that he finds Nick alone in a bar, hurt, angry, and too drunk to stand on his own. In order to help him, Marcus must put his personal feelings aside so that he can be the friend that Nick needs. Not entirely sure that he can pull it off, he helps Nick get home, tucks him safely into his apartment, and watches over him through the night. Convinced that Nick will never see him as anything more than a co-worker, he resigns himself to his fate. That of being a man who is permanently relegated to the “friend zone.” Until Nick kisses him that is… ** A Siren Erotic Romance.

Nick Stevens finds himself alone and in a new city with few friends at New Year’s when his long-time partner leaves him for someone else.

Gutted and totally blindsided, Nick ends up drowning his sorrows at a time when everybody is celebrating. His impeccable manners lead him to calling his new work colleague to let them know that he won’t be celebrating with them after all.

Enter Marcus Anderson. All round spunk extraordinaire, he’s a fun loving, cheeky little thing who hasn’t exactly hidden his attraction to the new guy in their office. Marcus is a partner in the literary agency where they work with his friends that the series is based around. And while everyone else in the office sees the sexual tension, Marcus has respected the ‘taken’ status of his colleague Nick, putting himself in the ‘friend’ category.

Nick was adopted at 12, his parents accept and love him for who he is and would support him through anything. I loved that the story tells us that when he came out to his parents they reacted as if it was perfectly normal and acceptable and even suspected it, so it was no big deal. Lucky man.

Unfortunately Marcus didn’t get the same reaction. He was disowned and 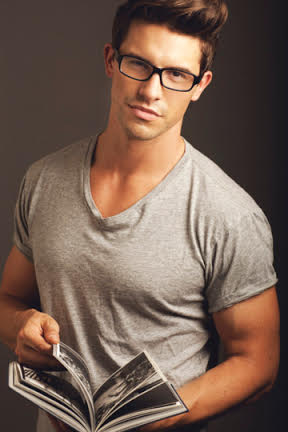 disinherited at 17 and hadn’t had any contact with his parents since. It’s a familiar story, and one I despise. How is it that Nick’s adopted parents who chose to love him could accept their child more openly than biological parents who can’t possibly accept let alone show love? It’s crushing to read as a parent.

So the story goes that Nick runs into Marcus and he’s totally off his face. Marcus takes him home and takes care of him, they have a little kiss and Nick passes out and can’t remember a thing. Marcus has listened to the detail that Nick was able to share in his drunken stupor and makes the decision to be what Nick needs, a friend.

With Nick’s newfound single status, the men spend more time together, they share stories and become better friends as a result, but what Nick isn’t able to share yet is that his previous partner left him in a horrid situation. Not only was he unfaithful, but he didn’t use protection. Nick takes a home test and contacts his doctor.

It takes a little matchmaking on Claire’s part to get these two amazing men together, and as the romance develops Nick is very conscionable and won’t be responsible for exposing Marcus to any unwanted STD’s. I was happy to see that this issue wasn’t just a token stereotyped response to a very real issue for many people; but more, it was the story. It tool months to resolve and I do take my hat off to the author for giving us some of reality and meshing it with a romance that’s centred around a wonderful group of people. That’s real life, and for me these are the things that I love to see being realised. There are too many taboo subjects; I’m all about being real. I love seeing stories of people who could be me and my friends. We’re all just fighting to live, and we’re all looking to be loved.

He realized then that he had something in common with Marcus that he never would have suspected. They’d both been rejected by their biological parents for whatever reason, but they’d still managed to be a part of a family. Bonds created through love and mutual respect instead of through blood relation.

I’ve gotta say, Marcus is just a darling. He’s sweet and funny, a loyal friend and he has a lot of issues surrounding the betrayal of his parents. When things get serious with Nick he is confronted with issues he thought long ago dealt with. And can’t we all identify with that? I’m a firm believer in us being given the right people and circumstances at the right time to deal with certain issues in our lives, and until said circumstances come about we have no idea what is around the corner.

Nick is gorgeous too, a sweetheart with a heart of gold. He is willing to meet Marcus in the middle, to protect and love him fully.

“There was nothing to forgive. But thanks for the nooner.” The corners of his mouth tilted up in a grin. “You are most welcome. Next time? I’m bending you over my desk,” Marcus informed him with a satisfied smirk.

This book is part three of a series, and while I have to admit that the blurbs of the previous books didn’t excite me too much this one did. I love to read a series in sequence, and I really enjoy the kinship and familiarity you get from reading about a group of people who you come to know and love through the story. I actually enjoyed this book and feel invested enough to go back and read the previous books. I love it when I’m wrong like that.

I would encourage you to read this story and possibly even start at the beginning of the series if you like a bit of HET-lit as I will be after writing this review. The group of friends are very likable, well rounded with a few crazies thrown in – normal.

What can I do to make it up to you?” He thought about that for a minute. With a twinkle in his eye, he asked “Do you still have that strap-on?” He wiggled his eyebrows suggestively.

Claire is Marcus’ best friend, I loved her right away, she’s not afraid to admit to a little over the desk frolicking, they fight and they’re fun. She’s sassy and Claire along with Kate formed a valuable alliance for Marcus who saw him through the worst of his life, at a time when he was at rock bottom they were and still are his family. Kate, their most successful author whose story I suspect is one of the previous books in the series is a cute little character who is kind of quiet and reserved and happens to be married to a rock star and I’m intrigued to find out what happened there. Abby works there too and reminds Nick of his sister (foster).

What I liked about this book was the underlying theme. We are all different, at differing phases of our lives, we each want to belong, Marcus couldn’t get that from his biological family and Nick’s own flesh and blood left him to the foster care system. But what is important is that we find our own network, our own special family, be they blood related or not.

Nice review, Judy. This sounds like a sexy read with a good heart and story. Like the pics, Cindi will want that guy in glasses 😀

I’m in love with the guy wearing glasses. And he’s got a book in his hand. Can we say perfect Cindi guy? Hello! 😀

This looks like a very good book. Thanks for your review, Judy.

I loved him too. There’s something super spunky about the flex he’s sporting.
I may have spent a moment or two just breathing… ahh!