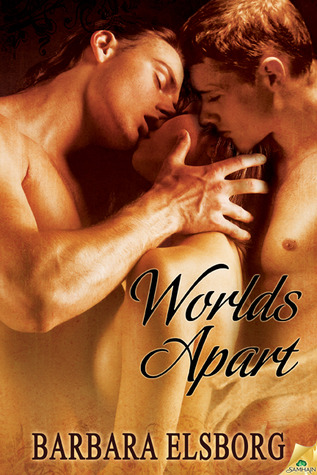 “I ask nothing of you,” Niall said. He’d said that before. What did he mean?

At the beginning of Worlds Apart, Taylor’s parents have moved to Spain. They are selling their family property in Leeds, Sutton Hall, and have asked Taylor to move in while it is on the market and they are living elsewhere. It needs a bit of upkeep and to be cleaned up. Taylor is in a very loose ‘relationship’ in Yorkshire, but after his parents ask him to come back he wants to help them out, and besides he can run his private investigation business from anywhere. Taylor had no problems leaving his latest squeeze. He has a philosophy of not getting attached anyway –

So Taylor heads back to Sutton Hall. There is much sadness around the property as Taylor’s ten year old sister disappeared from there one day, never to be seen again. Obviously it is something none of them have ever recovered from, her room is left the same as it was before she disappeared.

Before Taylor heads back, his parents let him know that a man by the name of Niall is also living at Sutton Hall. He tends the garden in return for free board and has been doing so for about six months. Taylor isn’t sure about sharing with someone he doesn’t know but soon enough he finds Niall good company – he cooks, bakes, is all around quite domestic, and is easy to get along with.

Niall is one of the nicest characters you will ever find in a book. He is utterly in love with Taylor. Has been from when they were young. Only Taylor doesn’t know or remember this. Niall is someone who believes wholeheartedly in love and is very kind and self-sacrificing. I loved him from the beginning and my affection only grew as the book progressed and his feelings and his secrets came out. He cannot ever tell Taylor that he cares or what he wants. He has a year for Taylor to fall in love with him without initiating anything, no matter how hard he wants to. If he doesn’t succeed he dies. He doesn’t have to be here and in this position but he chooses to be where Taylor is and his chance at being loved in return.

But first things first. Taylor needs to hire a new administrative assistant for his PI business, enter Roo. Roo is short for Roosevelt, her parents weren’t exactly the kindest people around. But Roo is feisty and quirky and kind. When she feels down or like she can’t do something she thinks of Roosevelt quotes to help her through. I really fell for Roo from the outset.  She is talked into going for the job at the PI agency and has to go straight from her shitty casual job to the interview. Both Taylor and Niall are looking at the lack of decent candidates, people with no initiative, when Roo turns up –

Five more minutes before Taylor heard Niall exhale in frustration, and then the door of the living room flew open and a chicken burst in. “What he fuck?” Taylor gasped.

“Hi, everyone,” the chicken said in a perky voice. “Thank goodness I’m not late. I had difficulty getting across the road.” She laughed and then sighed when no one else joined in. They sat staring at her in mute shock.

From the moment Roo burst onto the scene I was hooked. She talks a mile a minute, there is often not a filter, but what she says is always funny and always interesting. Roo finds Niall absolutely delicious from the outset but someone like him can’t be into her. At first Niall isn’t too keen on Roo as Taylor seems interested and he loves Taylor. But pretty soon he can’t help having feelings for her as well. In the mean time Taylor and Niall are getting close…and intimate. Both men like Roo but something 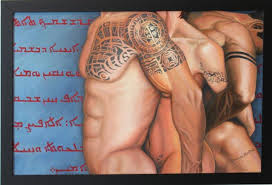 always happens that stops them from acting on it. She is getting mixed signals from both of the men so it is confusing. Then she even catches Taylor and Niall in the orangery one night giving each other a blowjob and she figures they are gay. But a woman can fantasise.. However, you know it isn’t going to be long before all three give in to the feelings they have for one another, but is isn’t all smooth sailing. Taylor seems to have an innate inability to have or show no feelings. Niall has a past and Roo has her own issues to overcome.

The contemporary aspects of Worlds Apart are all well handled and then there are the paranormal aspects of the book. Throughout you learn bit by bit that Taylor had an imaginary friend when he was young, one that disappeared at the same time as his sister. He didn’t remember this and there are reasons for that. But eventually it all comes back to him. Niall is a faery and he had his reasons for disappearing. The expression faeries at the bottom of the garden certainly rings true here. The latter part of the book looks at  Faeryland and the world building is excellent. The characters get better as the book progresses and I loved the fact that love is love and that some parents never learn how to accept their children, or let go, are themes in this charming book.

I liked how this book could be termed an out for you, but no fuss is ever made about that. It happens fairly quietly. Yes, Taylor has his moments of thinking that he isn’t gay and isn’t sure why he is so attracted to Niall, but he fairly quickly accepts the fact that he is sexually fluid. Ms Elsborg handles it all so well – that sometimes we just love someone because they are worth loving, irrespective of gender. I also liked that all three MC’s had distinct voices and complimented one another in different ways – Taylor so solid and, at times irritable, but decent. You learn more about his lack of ability to love as the book heads into the paranormal and that changes. Niall with his big heart and gentle, giving ways, and Roo with her positive outlook, self-deprecating manner, and the fact that she helps solidify their relationship. Their ménage.

One of the things I liked about Worlds Apart is that the three MC’s  were all well developed and given their individual POV. There was the right amount of time given to both contemporary and paranormal elements. All loose ends were tied up and there is a HEA via a lovely epilogue.

I recommend this book for lovers of ménage, paranormal, contemporary romance, some mystery,  lovely characters and charming storytelling.

What a lovely review. Thank you so much!

You’re welcome. It was a thoroughly charming book! 😀