Who Moved My Holepunch?, Anne Brooke 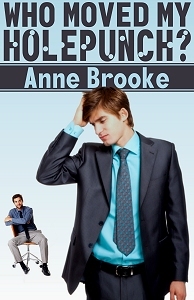 Tuesday was holepunch day. There was something immensely satisfying about taking a mound of papers, slamming two perfect holes in them and then filing them out of sight.

He really is served well in his role of making sure classes and schedules all run on time and efficiently. And to this end he has the assistance of Miranda and Stewart. Together they make a good team. They bounce dialogue off one another and are quirky and supportive. In comes the new acting registrar, Max Sheldon, and Darren, who hasn’t been in a serious relationship for approximately two years, is seeing a very attractive man who has that zing, ping factor going for him – you know that electric handshake that goes straight to the groin :). Even Miranda is lusting over Max.

In the beginning I actually thought I might struggle with this book, mostly because Darren irked me with his regimented outlook and his beige attitude. So I wondered how I might make it because it is solely Darren’s POV that we get. Darren ended up being full of surprises, I like a character who tops from the bottom and I actually ended up getting into Darren and his take-charge bedroom, or is that office sex, ways.

Max was very interesting but I wanted a bit more of him. I missed his POV here. That is my only criticism of this terrific short. I would love a sequel from Max’s POV. I really would love to see these two guys again. I hope Max is speaking to Anne Brooke because a sequel would be really great.

The dreams had started last Tuesday, the day of Max’s arrival. If Darren had thought there might be a gap between being attracted to an unsuitable man and the inevitable tide of midnight longing, he’d thought wrong.

…..Darren refused the offer and sank less than elegantly into the easy chair. Max sat opposite him with all the grace of a gazelle specially trained in sitting. 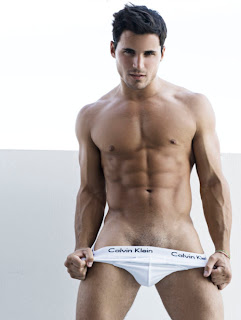 Then Max opened his lips, and Darren eased his tongue inside. He tasted good. Darren kept on kissing him feeling the moan in his own throat he couldn’t deny, and hardly believing he’d been bold enough to do this. It had to be the best meeting with the boss he’d ever had, bar none.

He could see the outline of Max’s cock through his Calvin Klein’s and the very fact of the label made him smile.

And, I’m happy to report, their meeting gets better still. But there is more to this than some sexy fun. There is much ado about the Office for Standards in Education coming to inspect their college. Which adds much interest and some good writing. Darren adjusts to some change and chases the man of his wet dreams which surprises the heck out of him. Max gives back as well and gets an excellent…employee.

If you are looking for a witty, sexy, gay office romp, then I highly recommend Who Moved My Holepunch? It is a great title and the content matches the cover – sexy and interesting.