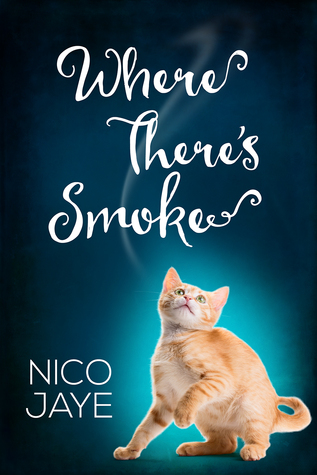 If he can make room in his life and his heart, an isolated medieval history professor might find a real life knight in shining armor.

A terrible breakup in his early thirties left David shying away from relationships. For years he’s been content with his solitary life, finding fulfillment in his career, books, television show marathons, and his cat’s companionship. When David meets his neighbor Zach, he can’t tell if Zach is just being friendly or if the handsome fireman might actually be interested in him. The more time they spend together, though, the more David questions his resolution to remain single. If Zach can extinguish the flames left by David’s past, David might finally break away from his structured life and take a chance on love.

A story from the Dreamspinner Press 2015 Daily Dose package “Never Too Late.”

Where There’s Smoke is an adorable little story. Nico Jaye is a great writer and I love how sweet her stories also are.

David’s sexy new neighbor helps rescue his cat from a tree. He’s attracted to said neighbor, Zach, but after a break up a few years ago, he’s closed himself off from dating. Even though the attraction and connection between him and Zach grows, he feels it’s better not to do anything about it.

Besides, he doesn’t know if Zach is even gay.

Zach is a fireman. When he’s not saving cats from trees, he’s working out in the gym. He’s also a really, really nice guy.

These two are so sweet! I loved watching them dance around each other and growing closer. David fighting his attraction for Zach was never tedious or annoying. And I really liked watching their relationship grow. Both of them were extremely likable characters.

I do wish this had been longer. It’s not that the story wasn’t lovely, it was. I really liked it and I really loved the characters. But I would have liked more of them together. To see how things worked out for the two of them.