What About Him, E.E. Montgomery 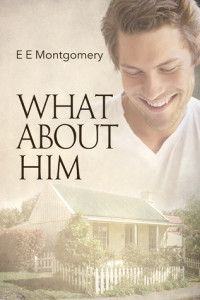 A very confusing read about a man who (I think) is searching for the man of his dreams.

*** The entire book is laid out in detail, spoilers included.  Keep that in mind before reading. ***

I am at a loss on this one.  Normally I finish a book with an idea of what to say in my review. With this one, I am typing this right now unsure of what to say. This, after sleeping on it and having several hours today in which to think about it.  I’m still lost. The entire book was confusing, starting from the very first page right up until it got to THE END.  I don’t like being that girl and typing bad reviews (I don’t do it often) and I will do my best to simply lay out the book and others can take that for what it’s worth.  If I come across as a bit harsh, I apologize.  There is simply no way for me to give my opinion without making certain comments.  They are my opinions only and I’m sure some will disagree.

This starts out with the main character, Aiden, having a conversation with a police detective, Sam, in the cafeteria of the university where Aiden works.  Aiden has always been attracted to the detective but he is convinced that Sam is straight.  The conversation is completely one-sided with Sam laying out an Australian history lesson to Aiden.  (My thanks to my Australian blog partner for informing me that he was referring to the Soldier’s Settlement Scheme.)  While reading this bit of history I assumed that the reasons for this particular discussion would be explained later.  It wasn’t.  I never did figure out why it was even mentioned with the exception of maybe something to do with the property that Aiden’s house sits on.  I could be wrong in that regard.  In fact, I probably am.  While I am always interested in learning more about my blog partner and friend’s homeland, I am at a loss over why it was discussed at length in this book.  Perhaps I missed something?  That is a possibility.

Apparently (though not much is mentioned as far as a back story) Aiden has consulted on police cases in the past. He is a sociology professor (I think.  I was confused on that as well) and Sam wants his help on a new case involving robberies.  It’s obvious by this conversation that the book is set in Australia though I do not remember reading where in Australia.

Then there is Baxter, Aiden’s best friend since they were in kindergarten.  It is stated many times in the book that the two men are the best of friends and have always been close.  I personally found Baxter to be one of the biggest bastards I’ve ever seen in a book.  No, he is not a friend in any way to Aiden.

1.  Bax has sex with Aiden six months prior knowing that Aiden is in love with him.  It comes out later (much later) that Bax only had sex with him because he was falling in love with another guy and he was scared of those feelings so he was using Aiden.  Bax tells Aiden this later in the book and the way he says it is like “What’s the big deal?”

2.  Aiden (while helping Sam with the case) takes Sam to a gay bar that Aiden and Bax often frequent.  Sam is there as Aiden’s date.  First, Baxter gets jealous because Aiden is there with another man.  Then he gets angry with Aiden because Sam is not interested in him and refuses to hook up with him.  How dare someone say no to him?  The fact that Sam was AIDEN’S date, not some random guy, means nothing. Oh, and he was furious with Aiden because Aiden dared show interest in Sam… his own date.  He, Baxter, is the hot one in the friendship. All men should fall at his feet (excuse the sarcasm).  Then Bax punches Aiden in the face (still at the bar) because he wrongly assumed that Aiden was hitting on Doug.

Aiden shows up at his house one day and sees a snake on his front porch.  He freaks out (quite literally) and calls a snake catcher who happens to be a handsome man named Doug.  Doug, it turns out, has been hooking up with Baxter for months (this comes out later).  Aiden, not knowing the connection between Doug and Bax, is attracted to Doug.

So now Aiden has the hots for Sam (the detective), his best friend (Bax) and a snake catcher (Doug).

One snake ends up becoming many so Doug is called out to Aiden’s home frequently.  The snakes (and snake catchers) have something to do with the case involving the robberies that Sam is trying to solve.  That part I did get. For the most part.  The resolution, however, was thrown in as an afterthought in my opinion.  The person doing the robberies is only mentioned in passing and has no real bearing on the story.

The snakes are a huge problem for Aiden and after the incidences at the club, Aiden arrives home (with Sam) and there is another snake on the doorstep.  He goes home with Sam and after what was an almost night of passion between the two men (Sam is definitely not straight as Aiden assumed) Aiden throws a diva-like tantrum (because of a Winnie the Pooh and Tigger comforter and nightlight… seriously… try to figure that one out) so the passion is over before it even really starts.

Aiden was totally getting on my nerves at this point.

Anyway……. Sam takes Aiden home the next day only to find a dead body in Aiden’s home.  Apparently after the snake incident the night before (and a frantic call from Aiden) Doug arrived at the home to remove the snake (again) only to walk in on a burglary in progress and was killed as a result.  This leads to the bastard best friend practically confessing to the murder and wasting a lot Sam’s time (because Bax was not the killer).

Aiden (who is wishy-washy when it comes to men) ends up with Sam.  I think.  I couldn’t tell.  It kind of looked like it but I ended this book not having a clue of what I had just read.

There are a lot of things (pretty much the entire book) that I did not understand. I normally end books like this saying that I wish there had been more details or that I wish that the characters had been fleshed out more.  I can’t say that in this case.  I don’t think I could have read anymore.

Not one character was likable.  Not one.  Aiden acts more like a whiny little girl than a grown college professor. He comes across as someone who doesn’t care who he ends up with as long as he ends up with someone long-term. Baxter, well I covered him already (total bastard). Sam is a detective (who does a pretty bad job of detecting) who is interested in Aiden but doesn’t take him seriously (I totally get that part).  Doug (the snake catcher) was just odd and I never did know what to make of him.

Overall, I can’t say I know what to make of this book.  I read a review by one person who said it looked like the characters were dropped into a sequel with zero back story to back them up.  I have to agree with that statement to an extent.  There is no background given for any of the characters.  The story is thrown together in the most confusing way possible.