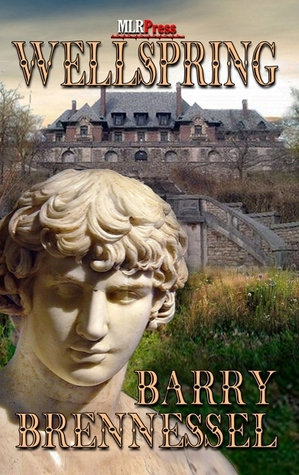 It is the Great Depression and Aiden Royce has just landed in the small New Hampshire town of Ansel Creek seeking directions to an old resort/spa. Once given directions, which in themselves do not bode well in spirit, he takes to hiking up a hill to the place he has been seeking since he received cryptic letters from his older brother, Thad. Letters with distinct details about a place Thad has so obviously been to. Aiden has not seen his brother since the War. And when he last saw him it was not under the best of circumstances and quite…strange. But Aiden needs answers. Answers about Thad. Is he still alive? Do the letters that have described a spa, a resort in New Hampshire, have a lead to his whereabouts? Can he find some peace about the last family member of his who may be alive? Thad had enlisted but it appears he didn’t serve as the letters Aiden has received are postmarked from different places in America during the latter part of the war, over a decade ago.

As Aiden is hiking up the hill of the property in question, he sees a striking man in a blue coat when someone else suddenly starts shooting at Aiden. Not exactly an auspicious start to his travels and enquiries. It turns out that the man in the blue coat is Sebastian Desmond one of the family who owns the decaying Cebren Spa. In its prime it was promoted as a restorative retreat as the minerals in the water were said to aid wellbeing. The water smells like sulphur and it runs in tunnels under the Spa, the main house, and other houses scattered around the property. The man doing the shooting is Frederick Esson, a neighbour, who is a little eccentric, fought in WWI, is a tad gun happy, and protective of all the land around the Cebren Spa.

After the initial meeting, Sebastian takes Aiden in and offers him his hospitality, which in the Depression is much appreciated.  Aiden is an artist and he loves the vistas from the property, the towers of the Spa. It appeals to his 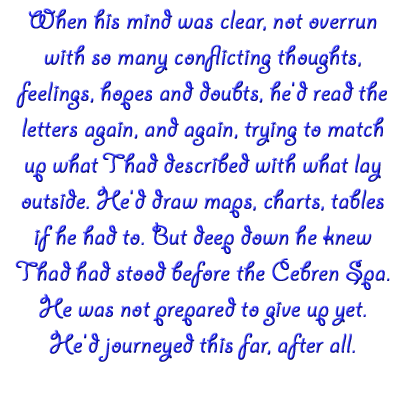 artistic eye. But there are strange occurrences on the property and Sebastian’s grandfather is not exactly lucid a lot of the time. Artist or no, Aiden wants to know about Thad. However, Esson, and others who come on the scene, aren’t too happy about Aiden being there. Unreasonably so. Why is that? Historically, people have made a habit of coming onto the property and stealing things, but Aiden has not proved to be a thief. There is a paranoia about it from Esson, Sebastian’s grandfather and another person who has long been a part of the Spa, Gilbert MacGregor.  Aiden asks about Thad, but no one claims to have seen him, and at times people seem deliberately vague or hostile about him asking. How could Thad be so accurate about everything on this property if he hasn’t been there? And if there is one thing definite about Thad it’s that he has always been a keen writer of letters.

Wellspring is a difficult book to review. First of all, I don’t want to give things away, and so much of this book really has to be read because the writing is part of the overall charm. Second, there is a mystery and build to the climax and beyond. Wellspring does jump between past and present as the past certainly does collide with the here-and-now of the Cebren Spa, the family living there, and Aiden. I will also say that the book does, in fact, span several wars – WWI, WWII and the Korean War. But the Depression and a bit of WWI form the primary backdrop.

The writing of Wellspring is beautiful and atmospheric – the snow, the storms, the 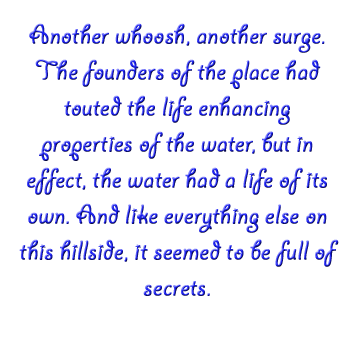 sounds. The mood of America in regards to WWI, the sentiment, was used well – it suited certain families and the plot perfectly. The feeling of the period that was the Great Depression was nicely written without being front and centre. It was more about the Spa, the characters, the mood. The book is drawn out in places, characters are vague, but it is done quite deliberately. The primary time period focused on always has a pitch-perfect accuracy – behaviours, customs, events. The historical aspects were impeccable. The story also looks at family, one child preferred over the other, same-sex attraction in a different era, lasting love and six degrees of separation.

There are a number of characters integral to the book – Aiden, Sebastian, their respective family members, and a couple of people who live on the substantial grounds and surrounds of the Cebren Spa – notably the gun toting Frederick Essen and Gilbert MacGregor.  Then there is Stromberg. The relationship between Aiden and his lost brother was rather an interesting and somewhat complex character study for this reader. I liked the relationship between Aiden and Sebastian but it is not an ‘MM romance’ per se. Yet it is romantic.

I’ll be honest, it took me a beat or two to get into the rhythm of Wellspring. Once I did, once 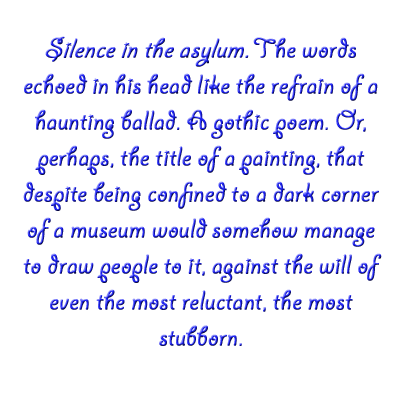 I was comfortable, it was very much worth the build. In typical Barry Brennessel fashion, the writing is intelligent, elegant, poignant and empathetic. He writes (main) characters who are everyday people dealing with unforseen events and circumstances. They have an adventure one way or another, but they are not alpha heroes or larger than life, they’re often quite gentle, introverted or conflict aversive. However, they always seem to experience something personal and profound. I admired Aiden’s devotion to finding out about his older brother. I really liked a realisation that came out. I also enjoyed time spent with Aiden and Sebastian and how the book ends. Highly recommended for people who are looking for LGBT fiction with beautiful, layered   writing and something historical with a mystery.

“But it seems to me you’ve finally found your secret lair, one you feel comfortable in. One I think I keep interrupting.”

ARC provided by the author in return for an honest review.

I love a good mystery and I love when an author can suck you into the lives of the characters so vividly. Your review has me wanting to know the mystery of Thad, and all that leads up to solving it.

Great review. I love the quotes.

I’ve added this to my TBR.

Thanks, Cindi. This book was a bit of a sanity saver for me so it will hold a special place.