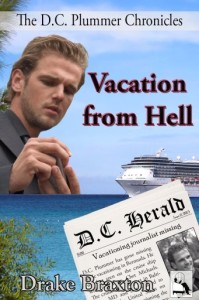 Blurb:  Donovan C. Plummer has a problem, he’s too obsessed with his job as a journalist for the D.C. Herald to keep a man in his life. Eight months into his present relationship with Chet Michaels and Donovan’s job is already putting a strain on their relationship, so Donovan decides to take Chet away from everything and go on a seven day cruise. The only problem is that Donovan has a big story about to hit involving a conservative senator caught in a homosexual liaison, a story that brings death threats to Donovan via e-mail. It isn’t until those threats follow Donovan and Chet on vacation that the perfect romantic getaway becomes the vacation from hell.

There are bad vacations and then there are vacations from hell. The title is fitting for this story because that’s exactly what the characters experience in this book…. true hell. What starts out as a cruise to discover if Donovan (Van) Plummer and his boyfriend of eight months, Chet Michaels, have what it takes for the long haul quickly turns into a major disaster and I’m not just referring to their relationship.

Van is a reporter in Washington, D.C. He has just exposed a conservative senator in a very public way with the biggest story of Van’s career. Thankfully Van and Chet will not be in town for the fall-out as the story will be published while they are at sea.  Because of Van’s career he has been unable to keep any type of relationship alive because he is married to his work.  He is hoping that Chet, a middle school teacher, will be unlike the others and that the two of them can make it long-term. Unfortunately, the fall-out of the story manages to reach Van and Chet and in a very big way.

On the ship, the two men meet an interesting cast of characters. One is a man who at first comes across as homophobic but later the reader is questioning exactly which way this guy really leans. He’s married to a woman but he makes it known (in a very forward fashion) that he is a bit more interested in Van and Chet’s sex life (among other things) than a straight man should be.  There are other interesting characters, both on the ship and off, who are integral to the story as well.

The book starts with a prologue that sucked me in immediately. As I am a huge fan of thriller-type books this was right up my alley. The story then goes on to describe how Van and Chet ended up in that particular situation, starting from their first day on the ship until something major (and violent) happens that makes the vacation take a serious turn for the worse.  While the author did not go overboard with violence, he does make it clear what has happened and what will happen if Van and Chet don’t find a way to get themselves out of the situation.  If they manage to survive, will their relationship? All of this plays out in a very serious (and at times, sad) way later.

This is one of those books where the reader will have no idea how things are going to play out… with the relationship, the scandal, everything. You will find yourself rooting for Chet, who will break your heart a few times, and you will hope that he and Van will be able to get beyond their problems. Chet wants a partner, not someone married to his job. Van just wants someone who will accept him for who he is and what he does.  But what happens when Van’s job almost destroys everything? The senator has not taken the scandal lying down and will stop at nothing to dispose of Van permanently. Unfortunately, Chet is caught in the crossfire and is forced on a journey of survival……. a journey that he did not sign up for when he starting dating Van months earlier.

I can’t go into too many details without giving the story away. Suffice it to say that the reader will be on edge waiting to see what will happen next. Will the senator win out in the end or will he get what’s coming to him? Will Van and Chet’s relationship make it or will Chet say “enough is enough” and walk away? You will have to read the book to find out.

This is the first in a series of novellas so of course the story doesn’t stop at the end. There are questions left unanswered and the reader will be eager to jump into the next in the series. I am.

Overall, this is a fantastic start of a series. While I’m not usually one to read about politics or even reporters, I could not put my Kindle down once I got involved in the story. The romance between Van and Chet, while unusual, is a nice one. The sex is hot. The mystery, while not much of a mystery per se, is well written. There are a few sad moments and I already mentioned the violence. You can’t help but feel for these guys and while things may not have ended the way I would have preferred, it definitely ended where I am eager to see where the author is going from here.

Highly recommended for those who love a little suspense, hot sex and an all around good story.

I like politics and some mystery in my books. This is another one that sounds interesting to me.

I think you’d like it, John. It’s a nice start to a series.