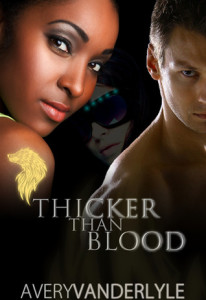 I really do believe that this is an interesting book. Well worth the read if you like a bit of technical substance in the framework of an LGBT book.

David sipped his bitter home-brewed ale and watched the bravest woman in the world dance. Ayana’s tattoos glowed yellow in the dimness, tribal shapes and animals prowling on the canvas of her chestnut skin.

Fourteen years ago the NanT Corporation developed nanotechnology-enhanced tattoos, including those with hologram emitters, then they added anti-aging bots to their repertoire, then intellectual nanobots –increasing memory, intellectual endurance, and decision making skills. People in positions of authority clamoured for the products. Within a few years, people with NanT implants started behaving erratically or becoming ill. After The Crash, as it was labelled, most of America’s leaders were dead and those that were left were disoriented; martial Law was enacted. Typically, chaos ensued, looting, violence and the government was overrun by those seeking power, including religious factions; who gained territories. During this period people learned that some children had inherited nanobots from a parent, and they were targeted by those fearful of what they may become. People with nanobots went into hiding, including one of the MC’s Dave, who had his bots passed on biologically via his mother. Now, fourteen years post The Crash, he runs a bar with his brother, Rich, and their cousin, Chip. That is how David comes to meet the nano-tattooed Ayana.

Ayana has a brother, James, who is now falling prey to the NanT nanotechnology and is dying. Ayana and Yan, Ayana’s scientist lover, have an idea to get some of David’s naturally resistant, inherited nanobots into James; to, theoretically, help him reboot his bots and restore his health. In the process James develops an insta-attraction to Dave. Ayana, Yan and James want David to accompany them to MIT to access their laboratories to help James and, via him, others with their ailing nanotechnology.

Given the constraints of size, being a thirty page ebook, it is pretty well written. Avery Vanderlyle has done a good job with the technicalities of nanotechnology, of where the characters are and why, of the society they now live in. I liked the fact that more than just lip service was paid to their dystopian society, there was some tension and a fair look at Ms Vanderlyle’s created society. Money is no longer the currency; useful items are bartered in exchange for something you need – fuel, cigarettes, oil, airtime minutes for the phone, batteries, weed, food, alcohol etc. The part that was lacking was the sexual attraction. It book was simply too short to flesh that out well. It was also too short to help grab emotional investment in/or give you full attachment to the characters. Having said that, I am interested in their journey and their plight; although I would have liked a particular character to have stood out for me.

This book seriously had the potential to be a real knock-out if it was closer to, if not a full size book. The ending is not going to please everybody as it literally ends mid journey for James, David, Yan and Ayana. So, I’m going to be presumptuous and believe that Thicker Than Blood is book #1 of a series, because, surely, it cannot be left where it is? I do recommend this book to those that don’t mind something a little different, and fancy a bit of science with their LGBT.

Previous post
The Reluctant Dom (The Suncoast Society), Tymber Dalton
Next post
Not a Shred of Evidence, Anne Brooke