The Trouble With Charlie, Merry Jones 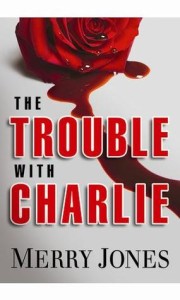 A well written murder mystery with a touch of paranormal.

Elle finds her soon-to-be-ex husband stabbed to death in her home. The murder occurs while Elle is in the house but she has no memory of what happened.  They haven’t lived together for awhile so why is he in her house?  And why does she keep hearing his voice asking her why she killed him?

Elle is going through a nasty divorce with Charlie.  She loves him but can never forgive me for betraying her and stealing from her during their marriage.  Her friend talks her into going to happy hour at a local club.  It’s the first time she has gone out as a single woman in years and she makes it known that she is not interested but her friend persists.  At the club, she meets a handsome magician, Joel, who gives her a rose. She’s attracted but panics and rushes home.  When she walks into her house strange things start to happen.  She keeps hearing Charlie’s voice and even feels him lean down to kiss her on the back of her neck. She smells his cologne in different parts of the house.  Charlie is not supposed to be there.  He moved to his own place months earlier and should not have allowed himself inside her home.  She searches the entire place.  No Charlie.  But yet she is hearing his voice again and again.  Then she notices the rose given to her by Joel.  Somehow it has moved from her bag inside the door to the kitchen.  Minutes later, the same rose appears on her bed.  Understandably, she starts to panic and she feels as if she is going crazy.  She walks outside to get air and when she returns, she finds the body of her soon-to-be-ex husband sitting on a sofa in her den.

Elle has a tendency to pull an Elle, as her friends call it.  She spaces out in the middle of conversations.  She is aware of where she is and being with her friends but she disassociates herself from the conversation and her surroundings.  She does this often.  She also experiences the loss of large gaps of time.  This is the case the night that Charlie is murdered.  Not feeling capable of killing anyone, she still has doubts. Charlie’s ghost talking to her… and asking her why she did it…. doesn’t help.

The police are called and Elle, of course, is the prime suspect.  She was in the home at the time of the murder, she has a recent knife wound on her hand and she’s covered in the blood of the victim.  This begins the mystery of who killed Charlie.  Did Elle do it during one of her spaced out moments or did someone else come in and do it? Did she see who murdered her husband?

There are several stories going on at once though they are all connected.  There is blackmail, a magician, a bimbo, the talking ghost of a dead husband, international child sex abusers, Elle’s lost gaps in time (later diagnosed by a psychiatrist as depersonalization disorder and dissociative amnesia), an almost romance, three somewhat annoying (yet well-meaning) friends, hateful in-laws and a murder mystery.

The story was good.  It was written very well and I wondered throughout how everything would eventually come together.  However, the clues were glaring, not just in regards to the murder mystery but the other mysteries as well… the why and the how and the who in regards to them. So obvious, in fact, that Elle was practically slapped in the face with them.  I can’t say that it took away from the story too much but I did find it a little frustrating.  I found myself thinking once or twice “Nobody is that dense.”  Did it take away from the story?  Not really because I was eager to see how it all played out.  Everything came together well in the end.  I loved the ending.  Not at all what I was expecting so that was a very pleasant surprise.  It makes me wonder if there will be a sequel in the works some day.  If not, that’s okay too.  It was the perfect ending to a very good book.

My first by this author.  I look forward to reading more.

This book was provided by Net Galley and Oceanview Publishing in exchange for a fair and honest review.