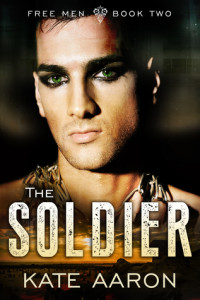 Review recommended for people who have read The Slave first.

“Kai, you’re a miracle, you really are. You brave, beautiful man.”

The Soldier takes up where The Slave finished on a cliff-hanger. Kai is now chained  behind a cart that has a cage containing Tam and Master. He knocked Tam out when the men attacked their compound in Otiz. When Tam saw Master felled he became hysterical and Kai did what he had to.

Knocking Tam out had been a kindness, even if the men intended to kill us, at least he wouldn’t see the final blow coming.

The same people who tore Tam’s life apart at age twelve have appeared to tear his world apart again, and Kai can’t stand that thought. That he, too, is a dark-haired, green-eyed Granthian –

Had he not been so scared, perhaps  he would have taken note of the dark hair and green eyes of the men descending upon us. Seen how closely they resembled me and realised it was my people who had torn his comfortable life apart.
Or perhaps he had realised. 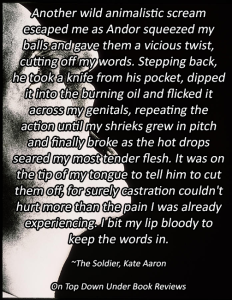 chained to pallets in a cell, supplied no food or water. Initially they manage to be able to move close enough for some tactile support. However, fairly soon after entering the stronghold,  Kai is taken for questioning by two Granthians, Andor and Zane. While Zane is a thug, Andor is a major sadist, torturing Kai to get information out of him about the ‘lost prince of Thirsk.’ Andor is convinced Master is that lost prince. Kai has heard nothing of a prince and Tam would have told him, the others at Master’s compound would have mentioned it. He’s been with Master and Tam for three months – after Tam purchased him at the Cage – and all he knows is Master’s a wealthy underlord in the outpost of Otiz. Andor and Zane have some compelling information and refuse to believe Kai. Andor continues to torture him in a barbaric way. Eventually he is released within the confines of the compound where Kai finds water for some respite and to breakdown for the first time in a long time – after a lot of held-tight misery.

One of the things I find interesting in the two books to-date is that, no matter where he is, Kai feels at one with water. Meanwhile, much damage is inflicted on Kai, and not all of it physical, although that in itself is nasty. As well as the physical, Andor relishes the degradation and the pain inflicted emotionally. For Kai it cuts deep as he is Granthian, these men are Granthian, and Kai had just barely accepted his role within a same-sex ménage with Master and Tam. Granthians don’t accept gay men. Now he is also a damaged pleasureslave –

If I survived this, I would be horribly scarred. Nobody would ever want me again. A fresh sob lodged in my throat at that thought.

After his initial ordeal, Kai manages to be able to move around the compound. He can’t leave as everything is well fortified and guarded. He wears a Thirskan pleasureslave collar, he fought against the Granthians who attacked the compound in Otiz, and the men are suspicious of him. They feel he poses no threat to them. They underestimate him in every possible way, further adding to his feelings of lack of self-worth. Everywhere Kai moves there are unfriendly eyes on him. He suffers derogatory comments and belittling behaviour. But he manages to collect water and scraps of food at the fountain and the canteen and takes bits and pieces to Tam and Master in their cell. 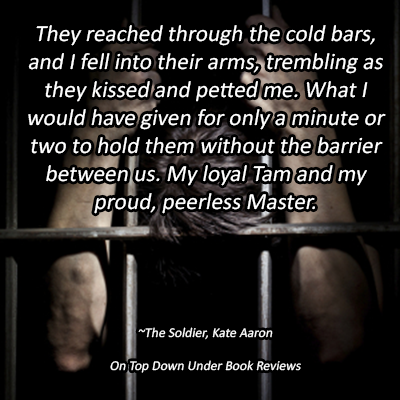 them escape. Kai is unsure how this is ever going to happen. As he stays low and listens, he discovers that these men are no longer in the Granthian army. They are swords for hire and there is a groundswell against Andor, that he has the ear of their leader, Orwen. Making them chase mythical lost princes. There was nothing of any value at the Otiz compound, there has been no pay for some time, and they are stuck in the middle of a godforsaken desert with lousy food, little to do, and zero  entertainment. Because Kai fought at the Battle of Guagamela, and survived that bloodbath, a couple of the men listen to his idea to obtain riches for them all. He has a plan that is risky, but because there’s the chance of big $’s involved the men want to see the plan in play. There is fear of a revolt by the men at the stronghold so Orwen capitulates and agrees. It is simple, he throws Kai out to run the risky gauntlet to obtain gold from Master’s wife, Neemah. It’s nothing to Orwen if he fails.

The Soldier is from Kai’s POV. What a beautiful, loyal soul Kai is. So sad yet so  strong – although he doesn’t see it. Kai feels he can’t keep those he loves safe and this burns away at him internally. For a strong man it is such a dilemma. He has a host of internal anguish and guilt all compounded further by injuries inflicted by his former countrymen. How hard to find out how little you mean to people you once fought on the same side as. How difficult to shake off inculcated ideas about love and sexuality. How demeaning to feel berated by all and sundry. To not be seen as a soldier. To be unsure where he fits. If not a soldier, if not a pleasureslave, then where? How seemingly unlikely he feels he will fit into Tam and Master’s socially-complex relationship –

…yet now I had two lovers, and still I was not satisfied. Instead of being grateful they’d allowed me into their bed at all, I wanted them to love me. Maybe not in the way they loved one another, but I had hoped, in my secret heart of hearts, they would have a little of that affection to spare for me. 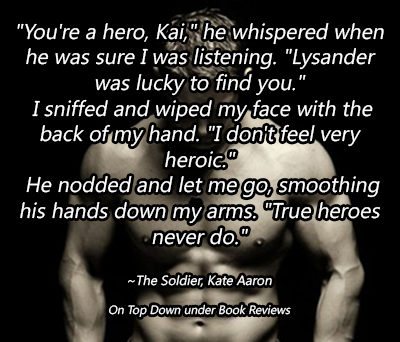 a way to go, as does Master. There is no cliff-hanger ending this time, but one critical point is (purposefully) left up in the air and primary threads are dangling enticingly.

This is a fine addition to the series. The world-building is further enhanced. The secondary characters continue to be well utilised and interesting. The story builds and is fascinating. The main characters are like pieces of a puzzle taking shape, with more   revealed about them all… piece by piece. I love Tam, I love Kai. Although I know his character, I want to really know the Master now. I need to read his story. Here is something I also want to say, Kate Aaron needs to take a bow for writing strong characters who have more than the standard romance alpha or submissive male traits. They are strong, intriguing men in their own ways, but they have dimension, depth, shading, and totally relatable emotions… and I bloody well applaud it. Bring on The Master. I cannot wait. Another gorgeous cover. 5 Stars!

After reading your review of The Slave, I knew I’d be all over Kai. After reading this one, I know this for a fact. I am so eager to read this series. I love dark and I can tell this series would be perfect for me.

Great review. Love the quotes and the pics.

Thanks for helping with that edit. Lawdy, I am SO tired….pffft.

This is a great book, you would love Kai, Cindi. I love loyalty and he is so darn loyal and wonderful 🙂 I can’t wait for the Master and I am not much of a series person, as you know.

I know I will love Kai. I really look forward to having time to dive into this series. I know you aren’t one for series normally, so that says a lot about this one because it’s obvious that you are heavily involved in it.

Not five minutes ago I finished reading The Soldier. Earlier this morning I had read The Slave and jumped straight into The Soldier and I was not disappointed. Both books are amazing and I can’t wait for the third one to come out. Loved the strong characters and the way Kate makes you really feel for them. I sometimes find it difficult to read from one person’s perspective only in a book but it just worked so well with these books!

They are amazing. It is so well written, you bleed for these men. I know sometimes readers are funny about a couple taking in a third, but this is so different. I really hope people jump onto this series.

I feel just like you do, Kelsey – I can’t wait for The Master. Glad you got into the books too. Fingers crossed for book #3. Let me know how you go 🙂