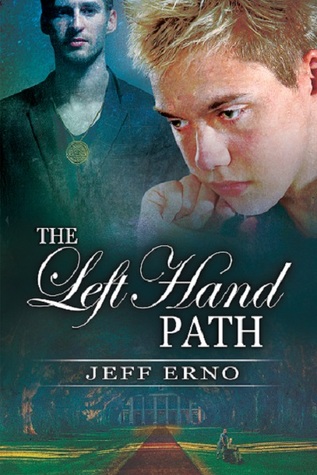 William Austin has always wanted to be a nurse, though he’s no longer sure the gratification is worth the pain of losing a patient. For now, he’s a nursing student and works two jobs—barista and private nurse. Will meets Blaine Coventry at the coffee shop, and when the altruistic young attorney offers him a job caring for his Uncle Elliot, Will accepts. Will finds that Elliot’s stroke has left him unable to walk or talk, and Elliot’s husband, James, says the goal is to keep Elliot comfortable until he passes. But Will starts rehabilitation, and his patient soon begins to make progress. When James resists, Will realizes something isn’t right, and investigates. Then he discovers a chilling secret that threatens to forever change Will’s life… or perhaps end it.

The Left-Hand Path is a hard book to fully review without spoilers and I would prefer not to write a spoiler review. The official blurb does a pretty good job of describing things…to a certain degree. It starts well with a sequence or a dream about two older men who are in fear of losing their life for their ‘abominable lifestyle’  – they are gay in another time period. Will wakes from the dream but can’t remember much about it other than it was quite powerful this time. The book does go back in time (occasionally) working forward, and even though they are short glimpses I thought Jeff Erno did a good job tying these sequences into the here and now.

Will lives in New Orleans with his BFF, Kat. He’s studying nursing and he has worked as a nurses aid for a homecare agency, but he is doubting his calling as a nurse because he gets attached and some older care patients have died. Will also works at Starbucks because he really likes people and it gives him a sense of satisfaction serving people something they want and having positive interaction. So , Will is a nice guy. One day at work he is serving a new customer who can’t make up his mind as to what he wants when Will offers to make him something, and if he doesn’t like it Will will pay for it. Later on when Will’s car, Bertha, doesn’t start the same guy, Blaine, takes him to the local auto store and buys some leads, then helps him jump-start his car. When Blaine is talking to Will he discovers that he is studying nursing and that he is a nurse’s aid so he tries to convince Will to work for his uncles, one of whom has been incapacitated by a stroke.  James is in his seventies and pretty spritely but Elliot, who is in his eighties, has had a stroke and it seems he also has the onset of dementia.

Will isn’t too sure, he would have to give up his job at Starbucks and move out of his apartment with Kat. But he starts up a relationship with Blaine, who seems like a nice guy – civil rights’ attorney, mentor in a Big Brother program to Jeremy  – and his uncle’s are offering $1,000 a week with board and all mod cons. So, Will accepts the position.

Blaine’s uncles’ property is about an hour from New Orleans and is an old plantation, complete with several cottages and buildings, but Will soon gets used to this as his cottage is well appointed, internet included. He also likes Elliot, the uncle who has had the stroke. Will wants to work with him to help him achieve a better quality of life. He believes firmly that this can happen. However, his husband, James, is not the easiest man to deal with and he wants Elliot to see his last days out in peace and with no physical therapy, sticking with a heavy duty drug regime. Something that Will thinks is not necessarily the optimum way to deal with Elliot. On top of this, Elliot is increasingly trying to tell Will something. Once he gets some more mobility he starts writing a few words down including HELP and other things that Will thinks are far fetched and part of the dementia. But Elliot insists more and more that things are ‘off’ at the plantation. Blaine pops in from time to time to tell Will he is doing a good job and assure him that it is the dementia talking and that James is attentive and loves his biological uncle, Elliot. At times that statement seems at odds with behaviour and body language. Pretty soon Will has decisions to make and perhaps everything is not as it seems – weird herbs, a woman at the local store telling him to watch his back, Elliot’s increased pleading…..

The Left-Hand Path is not long, and there is an interesting storyline going on. I liked Will. I thought he was a really sweet character, without being saccharine. There is a paranormal theme, the sex is light-on, and the other characters in the book are interesting – particularly the happenings around Elliot. I can’t say much more. There is a HEA for those who like that, and it is an easy light M/M for those who like their books eventful, with enough to make you turn the pages, but not angst-y. 4 Stars!

This book was supplied to me by the publisher, Dreamspinner Press, in return for an honest review.

Great review, as always. I’ve always been a fan of Jeff Erno’s adult books. This one looks interesting.. and sweet. Sometimes I really want sweet. 🙂

Thank you, Cindi. Sweet was nice and it was enjoyable reading. I remember seeing the premise and it piqued my interest.

[…] Recent Reviews: On Top Down Under Book Reviews […]