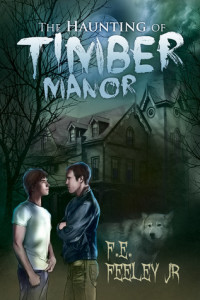 An outstanding book about the haunting of an estate, family and a beautiful love story.

Daniel Donnelly is mourning the sudden death of both of his parents when he receives a phone call from his father’s estranged sister, Carol.  Daniel has no memory of Carol but she is his last living family member so when she asks him to come to the Northwest to the family estate, Timber Manor, to spend a few months, he does so.  As Daniel was growing up, there was secrecy surrounding his father’s family.  Daniel’s father had run from his family home when he was only 18 and never went back.  Daniel is eager to see why.  What he is not prepared for is Carol turning over the entire family business and estate to him. The massive family business and estate, both of which have been in the Donnelly family for generations.  Daniel, at twenty-three, is now worth millions.  It comes out later than Carol is dying of cancer and she did not want to die without getting to know her nephew and making sure that her home and business were left in family hands.  Carol opens up the home and has workers throughout cleaning and repairing.  She wants her nephew to see the home as it once was, not boarded up and dusty.  This starts something in the home.  Odd things begin to happen.

Timber Manor is huge.  It has laid silent for many years with the only inhabitants being Carol and her butler,Thomas, and housekeeper and friend, Anita.  Daniel is immediately overwhelmed but he puts forth a huge effort to get to know his long-lost aunt.  He also meets Hale Davis, the local sheriff.  Hale and his family have worked on and off at Timber Manor for many, many years.  He is close to Carol, Thomas and Anita. When he meets Daniel, he tries to get to know him as a friend.  He also shares secrets about the estate.
On Daniel’s first night at Timber Manor, he has a strange nightmare about wolves and his late father.  These nightmares continue over time, each pertaining to something… or someone… who is supposedly haunting the estate.  Other things happen as well when Daniel is awake. Objects move.  Footsteps are heard when there is no one else around.  Lights flicker on and off at will.  As these things occur, Daniel and Hale get closer.  What starts off as friendship quickly grows to so much more.  The more time they spend together the more odd things occur. Only after one specific dream where the name Christopher is mentioned does Daniel finally get the story of his father’s family and home.  This is also when the “IT” haunting the home starts getting dangerous.  Daniel’s life is in danger and he and Hale must come together to find out how to rid the home of the ghost before they both are killed.

This is an outstanding story and also a difficult one to review.  So much happens and it would be difficult for me to explain it all without giving the story away.  The story of why Daniel’s father ran off at eighteen and never went back home is explained and is a major part of why the home is haunted… and who it is haunted by.  Then there are wolves.  There are several wolves that stalk the perimeter.  Each of Daniel’s nightmares also involves the wolves in some way.  The significance of the wolves comes out later and that was written perfectly.

Daniel and Hale are the perfect couple.  One of the main things I loved about this book is their relationship.  Most M/M books have the couple building up their relationship over time and then finding their HEA at the end of the book.  While Daniel and Hale do get their HEA at the end of the book, they are together much earlier and it’s obvious that they will stay that way.  The hauntings and the danger only bring them closer together.  Hale is very protective of Daniel and I couldn’t help but fall in love with his character as he literally put himself in danger (when he could have walked away) simply to protect him.  The relationship was written beautifully.

This is written in alternating points of view.  I read other reviews where some readers were confused by this and did not like the story as a result.  I’m not one of those.  Sure, I had to go back a page or two a couple of times to see who was talking at different points but I liked the way it was done.  You get inside the minds of each character at different times, not just one.  Considering the complexity of the story, this worked out very well in my opinion.  Not only do you read the point of view from the main characters, you also get inside the head of IT, the ghost that is haunting the estate.  This character is creepy and deranged but his point of view definitely made the story that much more interesting.

There are a lot of flashbacks and dreams.  I will be the first to not read a book that has a lot of both. I don’t like stories that are told with flashbacks and dreams.  In this case, each is necessary in order to understand the story as a whole.  They don’t last long nor do they drag out.  They are there simply to allow the reader to see why things are as they are.  You must understand the history of Timber Manor to get the story.  The dreams and flashbacks are the only way to do this.

Daniel and Hale (with the help of a psychic medium) must put themselves in serious danger to rid the home of the ghost that is hell bent on destroying Daniel.  Not only must they do this to save Daniel but they must do this so that Daniel’s father and grandparents spirits will be able to move on.  Otherwise, they are stuck in limbo on the grounds of Timber Manor, not being able to cross over to the other side.  The reasoning for this is also explained and explained well.

Overall, I have to say that I really loved this book.  I was not sure going in because I do not always have the best of luck with stories involving anything pertaining to the paranormal.  This one, however, was written very well and the way everything came together was perfect.  This is a first novel for this author.  Only a few times did I feel that it was a little bit too wordy.  This did not happen enough to take away from the story as a whole.

I highly recommend this for those who are interested in more than just a typical M/M romance.