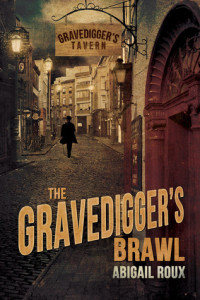 An interesting ghost story with a bit of romance thrown in.

I am a big fan of this author so I have been anticipating the release of this book for quite some time.  The Gravedigger’s Brawl is your typical ghost/haunting story but with the classic Abigail Roux twist.

Dr. Wyatt Case is the curator of a history museum.  He is a typical academic who is happiest in the midst of the museum’s historic objects. His best friend, Noah, also an academic, is the complete opposite of Wyatt.  While Wyatt comes across as straight-laced, Noah is fun and not afraid of trying new things… and new people.. *grin*.   Going to Gravedigger’s Tavern with Noah so that Noah can meet the owner, Caleb, completely throws Wyatt out of his comfort zone.  When Wyatt meets Ash LuCroix, the tavern’s eccentric bartender, Wyatt’s straight-laced world is thrown out the window.  Ash dresses in the style of the tavern (Gaslight) and has a large selection of tongue rings that he coordinates with the clothes he’s wearing.  After an interesting  meeting between Wyatt and Ash, the story begins to unfold.

Gravedigger’s Tavern is rumored to be haunted.  It is in an old, historic building that has a violent past.  Ash never believed the haunting stories until he gets a hard hit on his head. Suddenly he is seeing and hearing things that can not be explained.  Not only is he seeing and hearing things, but he is being attacked physically.  This gets to be so common that Ash starts to believe that he is going crazy.  His actions lead others to believe it as well.

Wyatt is on the verge of losing his curator job. After being given a final chance by the trustees of the museum he turns to Ash for help. Wyatt’s idea of bringing in patrons to the museum is to set up an exhibit about legends and ghost stories from the surrounding area.  Ash has a lot of knowledge of the local folklore so Wyatt turns to him for help.  By the time Wyatt reaches out to Ash, a misunderstanding (to put it mildly) has occurred between the two of them.  Ash grudgingly consents to help.  This plays a big part in what happens later.

There is a small group of secondary characters who are integral to the story.  Caleb, the owner of Gravedigger’s Tavern.  Noah, Wyatt’s best friend.  Ryan, a bartender at the tavern.  Delilah, a waitress.  Then there are the ones who may or may not be haunting not just the tavern, but Ash.

This is a very well thought out, researched story.  I could feel myself being drawn in by all of the details that the author added.  She did an excellent job of adding the creep factor and throwing the reader off at just the right time.

What this is not, however, is a big love story.  Sure, it is there between Wyatt and Ash but they are not center. The hauntings are.  In honesty, I found Noah and Caleb’s romance to be much more interesting than Ash and Wyatt’s. I felt that more time was given to Caleb and Noah (as far as their romance) and you could see each step of their relationship unfold.  Wyatt and Ash, not so much.  While things progressed rather quickly in the beginning, they do not for Wyatt and Ash.  They meet and get to know each other early but then they (as a couple) go on the back burner for awhile as the hauntings take center stage.  I was quite a bit into the book still waiting to see where the author was going with Ash and Wyatt.  They did get there eventually.

Overall, this was a good read.  As mentioned above, the author did her research and did it well.  This is the perfect read for the month of October because when I say there is a creep factor, I mean there is a major creep factor. Abigail Roux writes her ghosts well.  🙂

While I would have loved to have seen more between the two main characters, I am very satisfied with how the story played out.  While a bit rushed, the ending was absolutely perfect.

I highly recommend this to anyone interested in reading a good story about hauntings with a bit of romance thrown in.  If you are already a fan of this author, as I am, you will enjoy it even more.