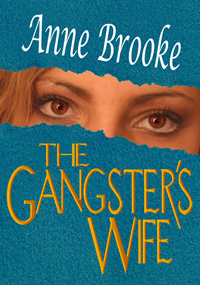 When 53-year-old Elise Walker returns home after a day at the office to find her husband Gerald dead of a heart attack, she doesn’t expect a visit from the police with revelations about Gerald’s secret life.

Soon, however, her own life takes a distinctive turn for the surreal, with missing loot, online crime and curious neighbours the least of her problems. Not to mention trying to deal with never-ending funeral arrangements and stay on top of her job.

Thank goodness then for the support of her ever-reliable boss, Hugh. But will even he turn against her when she decides to contact Gerald’s former gang members to find out more? And what is the real significance of the note Gerald left her? Most important of all, if Elise ever finds the money, will she be able to keep it?

This is a hard book to review as nothing particularly (or overly) fantastical or  outlandish occurs. It rolls along and builds momentum. The Gangster’s Wife was a nice change for me. Not a romance, although there is a snifter of it, but that’s it. It’s contemporary fiction – with subtle British humour and style – which follows several months in Elise Walker’s life from the day of her husband’s death to life after. Finding out Gerald had a whole other life of (white collar) crime on the side that she knew absolutely nothing about.

If it’s not enough to be burying your steady and gentlemanly husband, there’s  also the matter of some stolen money that Elise’s husband seems to have stashed somewhere. Something his crime associates and the police are most interested in. Of course there is a one word note that may or may not mean a thing. Then there’s Hugh, Elise’s boss, university admin machinations, and a well-meaning neighbour who is good for tea, cake, and sympathy – although the sympathy may mean different things to the individual. The funeral service had to be one of the most random services with a crime member, a police officer and Elise all giving their own… unique eulogies, which I found pretty quirky and amusing.

The writing is good, as I always expect from Anne Brooke, and the story was 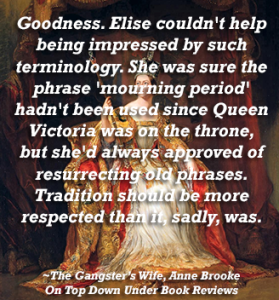 engaging. Even though Elise isn’t necessarily one of the warmest  characters on page, her outlook makes the book because if she were maudlin it would be a rather miserable story. And all circumstances considered, she is not easily phased and is quite shrewd. I admired that. She didn’t let the police push her around and she made a decision to do what it took to save her house – ill-gotten gains or not. And when she thinks about it, she’s rather proud of her husband’s criminal business acumen and the fact that he always remained a gentleman, which the criminal element support. The police, however, leave a lot to be desired.

“But you never managed to catch him actually doing anything illegal, did you?” Elise cut in, suddenly feeling inordinately proud of her secretive criminal husband.

“So if any of what you’re about to tell me is true, then whatever he might have been, my husband was in fact cleverer than you, and for rather a long time. He was also more polite, as you’ve not even welcomed me or thanked me for coming here yet.” Sergeant Bradley cleared his throat, and blinked, while the constable made a sound that might have been a laugh.

Another good read from Anne Brooke. I always enjoy authors doing something different and this is a deviation from others of Brooke’s that I’ve read. I recommend The Gangster’s Wife for people who enjoy a British setting, humour, and narrative – because that’s what you get. Crime in Surrey? Please, how un-Surrey-like. People who also like subtleties and empathise with what it’s like getting older and set in your routine/ways – and suddenly that rug gets pulled out from underneath you – may find rapport with Elise and her motivations. If you like character driven stories it helps, but there is also a bit ‘o’ mystery regarding the stolen cash as well. Nice reading to put your feet up and have a cuppa with. 4 Stars!

Gosh, thank you, Karen! Thrilled you enjoyed the read – I thought it might just be a bit too ‘British’ so am overjoyed with your comments – thank you! 🙂

I’m not sure there is such a thing as too British 🙂 I like my shot of England/Britain. It was just what I needed to read.

I can tell I’d really enjoy this book. I love humor and the bit ‘o’ mystery is right up my alley. 🙂

Thanks, Cindi. Anne Brooke never lets me down and this book was no exception 🙂