The Dragon’s Devotion (Chronicles of Tournai #5) by Antonia Aquilante 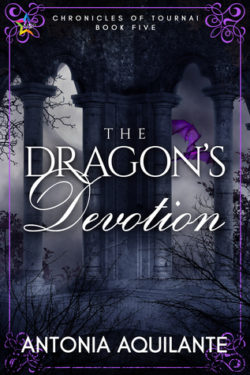 Tags: Alt-Historical, Fantasy, Paranormal Aspects, Dragon, Magic, Low on Steam, Series but can be read as a standalone

Corentin is a scholar with a secret—his magical Talent allows him to turn into a dragon, and he isn’t alone in that ability. Long ago, dragons were hunted fiercely, until they went into hiding, becoming things of legend. Corentin has traveled the world with one aim—to protect his people and keep their secret safe. Drawn to the principality of Tournai by news of someone close to discovering that secret, he hopes to avert suspicion. His attraction to the too-serious Bastien isn’t convenient for his purpose, but it isn’t something he can ignore either.

Lord Bastien, Earl of Ardesia, inherited his title unexpectedly when his parents were killed in a sailing accident along with the parents of his cousin, Prince Philip. Since then, Bastien has devoted his life to the obligations of his family and estate—so much so, that it has caused tension between him and his siblings. His world is further shaken when he receives an anonymous letter informing him that the tragic boating accident may, in fact, have been murder. Bastien throws himself into investigating whether the allegations are true and finding out who killed his parents.

As Corentin and Bastien become closer, the mystery of Bastien’s parents’ death draws him further into danger. Corentin feels compelled to protect Bastien, but the threat is closer than they know. Now, Corentin must decide whether preserving his secret—and potentially his people’s safety—is more important than saving the man he loves.

While this book is the fifth in a series, it can be read as a standalone.

It was nice being back in Jumelle and Tournai again with the cast of characters of this series. I loved visiting Philip and Amory. Cathal as well. It was good seeing Etan marry Tristan after some dramas around the pair, both with Tristan’s child and their relationship. Having said this, The Dragon’s Devotion is still a book that can be read as a standalone.

Master Corantin is a scholar working with Etan, one of Tournai’s royal family, at the local university. He first popped up in book #3, The Scholar’s Heart but at the time I wasn’t sure why he was in Jumelle. He isn’t from Tournai originally and is only supposed to be in Jumelle for a short time. He also keeps it pretty vague about where he hales from. Given Tournai has had issues with spies from the neighbouring and aggressive Ardun, Master Savarin, Tournai’s head sorcerer, has some concerns about what he surmises is Corantin’s Talent, why he is so secretive. When Corantin attends Etan and Tristan’s wedding he spots a man who attracts him instantly. It’s bad timing. He can’t afford to be attracted to someone because he can’t allow his Talent to be known and he isn’t sure how long he’ll be in Tournai.

Between matters of family and business and the mystery surrounding his parents death, he had no time to waste on a frivolous affair. But he wanted to. Oh, he wanted to so much.

Meanwhile, the Earl of Ardesia, Lord Bastien, is also going to be attending the royal wedding. Not too long before the event he receives an anonymous note that says the death of his and his cousin’s parents wasn’t an accident at all. Because he is now in Jumelle he wants to talk to his cousin Philip, who is the ruler of Tournai, but he doesn’t want to overshadow the happiness of the occasion of Etan and Tristan’s wedding. So what to do? Bastien is very much about duty to his siblings and duty to his holdings. He doesn’t allow himself the luxury of a relationship or fun and the note has only added more worry to Bastien.

At the royal wedding Corantin and Bastien lock eyes, they barely meet, then kiss. It is insta-attraction, neither knowing exactly why there is a strong pull to someone they don’t know. However, there is no insta-love as it takes time for that to build. The timing is off for both men – Master Savarin is still thinking about Corantin being a possible threat to Tournai’s security. He knows he’s a dragon, even if Corantin denies it. He also knows Corantin helped when Tristan’s daughter was kidnapped. But Corantin is worried that his Talent of being a dragon will endanger his people if anyone knows, so he can’t allow himself to say anything to Savarin.

Bastien is understandably upset about the note and what to do with the information. Were his parents actually murdered? If so, what does it mean? Were they the only targets, or was Philip also one, maybe himself as well? If that was the case, why didn’t anyone make a play for the crown? Make a play for his inheritance and title, his sizeable lands and horse breeding holdings? Philip requests the note and makes certain that Savarin and Captain Loriot, the head of the royal guard, take charge of any investigation. So there is a mystery element to this book as well which incudes a degree of magic. The note is scrutinised, events looked at, and someone’s hand is shown.

As for the romance, Corantin and Bastien have a very slow burn romance, in spite of the fact they do kiss a few times throughout the 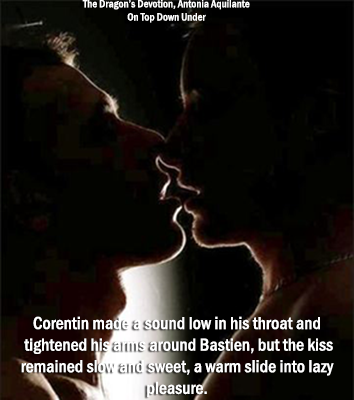 book. Both MCs have things that are important to them. For Corantin it’s making sure that being a Dragon is kept secret because of past persecution and a sense of duty for his people. For Bastien it’s his duty to his earldom and his sister and brothers who he has looked after since their parents’ death. If you’re looking for steam, this series possesses none of that. These books are more old-school quiet and sweet romance stories/reading. I loved Corantin’s Talent. Being a dragon is different. A number of the royal family have their own Talents, the cats of Tournai among them. That Corantin comes from out of Tournai and has his own means he’ll fit in with the tight-lipped royal family and their confidantes. He just needed to learn that.

My primary niggle about this series tends to be the same – there can be too much detail about buildings or surroundings and a bit too much internal dialogue. I guess I accept that this is the way the series is as I keep reading the books, so clearly I continue to enjoy them. Just letting other readers know that while the book is fantasy, it’s more concentrated on characters than action, also with dash of mystery or suspense.

Going into The Dragon’s Devotion I wasn’t one hundred percent sure of this paring – the dragon Talent hooked me though – but it worked well. I really liked these stubborn men, but thank goodness Ligeia told Bastien to think of

himself, to also communicate. I’ve read four of the five books in this series thus far and, even though Etan and Tristan’s book and I didn’t mesh, for the majority of this series I’ve very much enjoyed my time spent in Jumelle. In Tournai. I love revisiting Philip and Amory and their little family. The people in this world are polite and mostly gentle, I find it a nice place to remove myself from the real world that is angry and frustrating at the moment. Previous reviews for book #1, #2, #3 are here, I missed book #4 but I’ll catch up. I keep coming back to this series every year, I keep reading it, and I’ve bought nearly all of the books myself, so I have a soft spot for Tournai.

Overall, The Dragon’s Devotion is a very sweet, very relaxing romance that is based within an alt-historical fantasy world, complete with royalty and magic, and Corantin and Bastien were a nice match. If this sounds like you, grab yourself a copy. 4 Stars!

I do love a sweet, very relaxing romance. I know how much you enjoy this series so I’m glad to see this one worked for you, even with your niggle with it.

Great review. I’m loving the cover and the purple you used in the visuals.

Yes, I do keep coming back to Tournai 🙂 It’s easy and gentle reading that’s nice to relax into.

I love purple so I had to run with it because it’s a theme with the dragon and that cover is pretty.