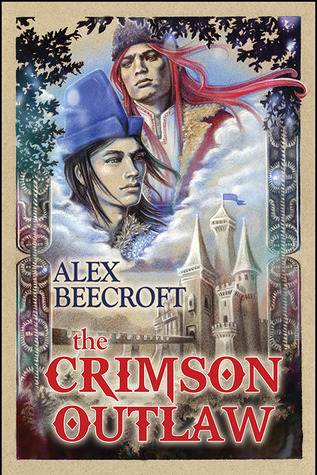 Vali Florescu, heir to a powerful local boyar, flees his father’s cruelty to seek his fortune in the untamed Carpathian forests. There he expects to fight ferocious bandits and woo fair maidens to prove himself worthy of returning to depose his tyrannical father. But when he is ambushed by Mihai Roscat, the fearsome Crimson Outlaw, he discovers that he’s surprisingly happy to be captured and debauched instead.

Mihai, once an honoured knight, has long sought revenge against Vali’s father, Wadim, who killed his lord and forced him into a life of banditry. Expecting his hostage to be a resentful, spoiled brat, Mihai is unprepared for the boy to switch loyalties, saving the lives of villagers and of Mihai himself during one of Wadim’s raids. Mihai is equally unprepared for the attraction between them to deepen into love.

Vali soon learns that life outside the castle is not the fairy tale he thought, and happy endings must be earned. To free themselves and their people from Wadim’s oppression, Vali and Mihai must forge their love into the spear-point of a revolution and fight for a better world for all

Nineteen year old Vali Florescu has decided that his sister’s wedding to Danylo Ionescu is not something that she wants – the wedding day is dark, it is raining, and Stelar is crying. He has a plan, a distraction, to help her escape the impending nuptials to a man the same age as their father. Vali causes havoc and gives his sister a chance to escape but nothing turns out as he plans. Least of all him being beaten ferociously by his father and then thrown in the dungeon. In spite of all the things his father has done, and in spite of the years  growing up with an increasingly angry man, Vali remembers kindnesses from earlier years, and he holds onto them. He can’t reconcile his father with the man who has treated him so badly. Not only that, in the dungeon he sees things that disturb him, all at his father’s behest. Vali manages to escape, get his horse, and ride off into the local forest. Here he has his first meeting with a local outlaw but manages to get away, although his horse is injured – he has trained with his father’s guards since he could hold a sword. He makes it to the local town of Bucin and gets some assistance from an older couple who house his horse while he goes to the local animal doctor, Nicolai. The couple recognise him and are fearful that Boyar Wadim will punish them if they harbour him.

It is in Bucin he formally meets the outlaw Mihai, and Vali finds him both charismatic and attractive – he is like a boyar himself – the way he carries himself and the local people respect him. Pretty soon after their meeting in town, Mihai and Vali are physical – Vali has never been with another, but has always had fantasies of a stronger, wilder man having his way with him…only this is much better.

Things are turned upside down when Vali’s father and his men start to burn Bucin and kill the local townsfolk, all while searching for Vali. He wants to give himself up to save others, but Mihai won’t have it. It won’t make anything better and Vali will be punished again, there is no point to that. In the fracas Mihai is wounded. Nicolai patches him up but the wound becomes infected. Vali is told to take Mihai to Rodica, a white witch in the Carpathians. She makes teas and poultices for Mihai. The two men stay for weeks on end while Mihai mends and then grows stronger. During their stay here their intimacy and strength of feelings intensifies, but they know they can’t stay there indefinitely. Vali wants to take over the role of boyar from his father, to be fairer, but he doesn’t want him harmed. Mihai has to convince three other outlaws about the plan to take Boyar Wadim on without killing him.

The Crimson Outlaw is an action packed historical romance which keeps a steady pace throughout. I liked both of the MC’s and I felt transported to  another place in time –  1720’s Transylvania. This is also the first time I have read a book of Ms Beecroft’s where there is sex on page and I liked it. It was both sensuous and helped the bond between Vali and Mihai. Another good historical by Alex Beecroft. Not long, but plenty packed into the pages. I also love the cover.

This sounds like a nice, action-packed story. I can tell that I would like Vali and Mihai and the romance between them.

Thanks, Cindi. I do like a well written historical and Alex Beecroft does it well.
😀